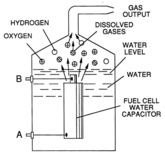 Free energy is the idea that a low-cost power source can be found that requires little to no input to generate a significant amount of electricity. Such devices can be divided into two basic categories: "over-unity" devices that generate more energy than is provided in fuel to the device, and ambient energy devices that try to extract energy from the environment, such as quantum foam

in the case of zero-point energy devices.

Not all "free energy" claims are necessarily bunk, and not to be confused with renewable energy. There certainly is cheap-ass energy to be had in the environment that may be harvested at either zero cost or sustain us for long amounts of time. Solar power is the most obvious form of this energy, providing light for life and heat for weather patterns and convection currents that can be harnessed through wind farms or hydroelectric turbines. In 2009 Nokia announced they expect to be able to gather up to 20 milliwatts of power from ambient radio sources such as broadcast TV and cellular networks, enough to slowly recharge a typical mobile phone in standby mode.[2] This may be viewed not so much as free energy, but energy that someone else paid for. Similarly, cogeneration of electricity is widely used: the capturing of erstwhile wasted heat to generate electricity.

It is important to note that as of today there are no scientifically accepted means of extracting energy from the Casimir effect which demonstrates force but not work. Most such devices are generally found to be unworkable. Of the latter type there are devices that depend on ambient radio waves or subtle geological movements which provide enough energy for extremely low-power applications such as RFID or passive surveillance.[note 2]

Free energy is a popular research subject for fringe inventors, but because of a lack of positive results that meet scientific standards, the field has become a haven for investment fraud and pseudoscience.[4]

Free energy runs in paradox with the first and second laws of thermodynamics; because of the relationship of entropy and work, either the amount of mass/energy in the universe would have to increase (in over-unity devices), or the amount of entropy would need to decrease for a free energy device to function.

Not to be confused with free energy commonly referring to the Helmholtz free energy in physics or the Gibbs free energy in chemistry, two legitimate thermodyanmic potentials. These are called "free" because they roughly refer to the part of energy not take up by entropy and available to do work.