'Would you like some ukrain or mistletoe injections for your cancer?'

Michael Uzick is an American licensed naturopath (read: quack) who practices in Tucson, Arizona and is prominent in the naturopathic oncology community.[1][2][3] He advocates for "natural" treatments of cancer and other chronic diseases,[4][5][6][7][8][9] despite such interventions being contrary to the medical standard of care and widely considered to be quackery. As part of his naturopathic practice, he was importing and administering an illegal cancer drug called ukrain

to his patients. He was reported to the Arizona naturopathic medicine board by his then colleague, Britt Marie Hermes,[10] which led to him being disciplined by the board with a letter of reprimand.[11] This is a great example of the inadequacies of self-regulation by the alternative medicine professions, in that they tend to hand out a "slap on the wrist" for serious acts of misconduct, even for federal crimes.[12] He used to be an HIV/AIDS denier, but given how quacky he is, who knows if he still harbors these crank ideas.[citation needed] 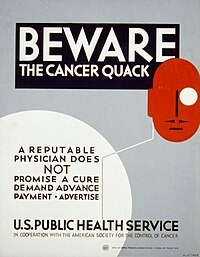 Uzick has built his career becoming what a tremendous many would consider to be a 'cancer quack.'

Uzick graduated from Bastyr University in 2000 with a doctorate in naturopathic medicine.[13][14] He completed naturopathic residency training at Cancer Treatment Centers of America in Seattle, Washington and at an alternative medicine clinic in Tijuana, Mexico called Bio-Medical (Hoxsey) clinic,

[7] known for a long history of cancer quackery.[15][16] Such training should not be confused with a real medical residency that real physicians undergo at real hospitals and clinics. Uzick's choice of alternative "residency" positions enabled him to become registered as a Fellow of the American Board of Naturopathic Oncology and to use the title "FABNO" as part of his credentials,[17] which means he is considered a "cancer expert" by his naturopathic peers and appears as such to the public. To any skeptic, however, FABNO should be read as "FAB? NO!"[18]

Despite his involvement in the HIV/AIDS denial movement (see below), from 2001 to 2005, Uzick was the naturopathic medical director of the Southern Arizona AIDS Foundation.[7][9][19] Uzick later served as an instructor of naturopathic oncology at Southwest College of Naturopathic Medicine

In 2014, Uzick received the Association of Naturopathic Physician's President's Award,[2] an award given to naturopaths who are the most successful at wooing patients with dangerous and disproven treatments.

Michael Uzick claims to be a reformed thinker on the denial of the existence of HIV/AIDS, as he once believed that HIV/AIDS was a conspiracy.[25] He previously served as the webmaster for HEAL

Seattle, a defunct advocacy group which denied that HIV causes AIDS, that AIDS is a fatal disease, and that anti-retroviral drugs are effective for treatment.[26]

Michael Uzick was highly involved in the HIV/AIDS denial movement while in naturopathic school at Bastyr University in Seattle.

Uzick advocates the use of "food as medicine," which is a treatment philosophy that has been criticized by the scientific community as being overly simplistic and giving patients false hope based on very poor evidence.[27] He has argued that lignans contained in flaxseeds offer substantial anti-cancer benefit to women with increased risk of breast cancer[6] and offer protection for men from developing prostate cancer.[7] Uzick advocates for using a ketogenic diet

in place of proven medications,[28] which is not supported by a review of the available evidence.[29]

Uzick advertises the use of Iscador, an extract of mistletoe, in his practice for the treatment of cancer,[30] and he has advocated for its use at the 2006 annual meeting of the Association of Naturopathic Physicians.[31] He has argued that Iscador shows significant benefit to patients with malignant melanoma.[4] In a 2006 review of the best available evidence, Edzard Ernst concludes that for the treatment of any cancer mistletoe has no proven benefit and carries significant risk.[32] Mistletoe extracts cannot be imported into the United States except for the purpose of clinical research.[33] Uzick has never conducted clinical research according to a name search on ClinicalTrials.gov.[34]

Ukrain and a slap on the wrist[edit] 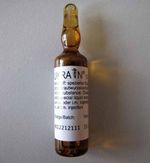 One ampoule of ukrain among the 200,000 or so confiscated by the Austrian police.

The chemical structure of ukrain that was claimed by the former manufacturer.

In 2014, Uzick was disciplined by the Arizona Naturopathic Physicians Medical Board with a letter of reprimand for using the drug ukrain

in his practice, which is not approved by the U.S. Food and Drug Administration.[11] According to Arizona law, a letter of reprimand is issued "by the board [to inform] a person who is regulated under this chapter that the person's conduct violates state or federal law but does not require the board to restrict the person's license, certificate or registration because the person's conduct did not result in harm to a patient or to the public."[35] It is a federal crime to import drugs into the United States that have not been approved by the U.S. Food and Drug Administration.[36] An outstanding question for the members of the Arizona Naturopathic Physicians Board is whether any of Uzick's patients were harmed, either physically, emotionally, or financially. It doesn't seem to be the case that they investigated Uzick thoroughly.

Ukrain is manufactured in Austria by a quack chemist named Vasyl Novytskyi, who claims that ukrain can treat a wide range of serious disease, including cancer, HIV infection, and hepatitis.[37] Novytskyi had his entire lot of ukrain confiscated because of poor quality control practices and evidence that he relabeled expired vials of ukrain, which had been sold abroad.[38] This finding means that the ukrain Uzick had used in his practice could have been contaminated and expired. This possibility seems inherently harmful to vulnerable cancer patients whom Uzick treated. In fact, one of his patients with esophageal cancer made a GoFundMe page to collect donations to pay credit card bills of more than $43,000 for Uzick's "alternative cancer treatment."[39] This patient died in 2015.[40] The number of patients that Uzick treated with ukrain and how much he had charged them for the illegal drug remains unknown.