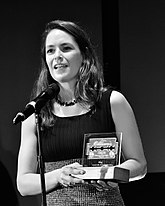 Britt Marie Hermes (née Deegan) is a former-naturopathic doctor[1] who rejected naturopathy and now speaks out against alternative medicine. Hermes earned her ND from Bastyr University in 2011.[2] In 2014, Hermes reported her supervisor, Michael Uzick, to the Arizona naturopathic medicine board and the state attorney general for injecting ukrain, a drug without FDA approval, into cancer patients.[2] As of 2017, Hermes is Ph.D. candidate in evolutionary biology at the University of Kiel in Germany.[2]

While Hermes practiced naturopathy in Arizona, she claims to have "witnessed illegal, and other dangerous, inept, and unethical practices by licensed naturopaths."[1] She also claims to have been counseled by a colleague to ignore wrongdoing by other colleagues.[1]

Some of Hermes' specific criticisms of naturopathy are:

In July 2017, Hermes received a notice of cease and desist for alleged defamation from the lawyers of Bastyr University.[5] The lawyers claimed that Hermes made several false statements regarding the quality of education at Bastyr University on her own blog, on Forbes and on three other websites (www.science20.com, www.kevinmd.com, and www.sciencebasedmedicine.org).[5]

In August 2017, Hermes also received a notice of cease and desist for alleged defamation from the lawyer of naturopathic doctor Colleen Huber.[6] Huber runs the cancer clinic "Nature Works Best Cancer Clinic" in Tempe, Arizona.[6] Huber also is president of the non-profit charity Naturopathic Cancer Society, which according to Hermes raises donations for patients at Huber's own clinic, though Huber's lawyer has disputed this.[6] In 2019, Hermes prevailed against Huber in the defamation lawsuit.[7]

This article is a stub.
You can help RationalWiki by expanding it.
Retrieved from "https://rationalwiki.org/w/index.php?title=Britt_Marie_Hermes&oldid=2135710"
Categories:
Hidden category: