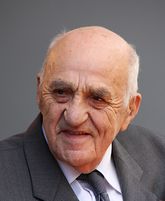 The man himself, Norway's most notable quack

"), was a self-declared Christian faith healer and psychic from Norway.[1] Snåsamannen was portrayed in the media and by himself as a humble, mild-mannered and kindhearted rural old man, and a good Christian who supposedly drew his powers from his faith.

Although virtually unknown outside the country, he enjoyed great fame and admiration nationally. Despite Norway being one of the least religious countries in the world, 1 in 2 believes this man truly had supernatural powers.[2] Even high ranking politicians and others who should have known better endorsed and consulted with him.[3]

The 'warm hands' were his trademark as a faith healer. His methods included priming ("Can you feel the heat? Can you feel the heat?"),[4] cold reading and to some extent warm reading.[5] Needless to say, he declined any scientific testing, including a personal invitation from James Randi to the million-dollar challenge.[6]

Snåsamannen did not, in fact, charge anyone for his services, and that is a big reason he is famous. He did, however, accept gifts, and they came to be expected.[7] Nevertheless, he was quick to denounce competing faith healers as "greedy".[citation needed]

Self-described as a "modest and humble man", he wrote no less than three highly commercially successful autobiographies. Unfortunately, the few books critical of his act weren't as well received by the public.[citation needed]

Whether he genuinely believed in his own supernatural abilities, or was a full-blown trickster and fraud, is hard to say for certain. He was caught being deceitful and lying outright in his books about the number of people he had 'healed', allegedly 50,000, and the nature of their illnesses.[8]

Lapdog of the media & the media as his lapdog[edit]

Snåsamannen's fame wouldn't have been possible without the media. There's a symbiosis between the two, even though it's ultimately detrimental to the media's goal of conveying the truth. National newspapers and TV gave him an inordinate amount of publicity while often being completely uncritical in their journalistic efforts. As a psychic he made many predictions about trivial matters in the near future, such as sports results, but because of confirmation bias and sensationalism, the failed ones rarely got reported.[9] Princess Märtha Louise has not fared as well in the media as Snåsamannen.