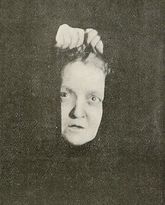 Spiritualists have written that Palladino was a genuine medium, could communicate with spirits, levitate tables, materialise hands and move objects without touching them; however in reality she was a total fraudster who was caught cheating many times. Palladino had a preference for dark rooms and refused to be investigated in light conditions. She was also an expert at freeing her hands and feet in the seance room.

In England, America, France and Germany, she had been caught using tricks. In 1910 Dr. Stanley LeFevre Krebs wrote an entire book debunking Palladino and exposing the tricks she had used throughout her career titled Trick Methods of Eusapia Paladino. The book can be found free to read online here.

Palladino was invited to England in July 1895 to Frederic William Henry Myers' house in Cambridge for a series of investigations into her mediumship. According to reports by the investigators-Myers and Oliver Lodge-all the phenomena observed in the Cambridge sittings was the result of trickery. Her fraud was so clever (Myers said) that it "must have needed long practice to bring it to its present level of skill".[1]

When she was brought in 1895 to London for investigation by the SPR (Society for Psychical Research), the results proved disastrous for her mediumship. During the London experiments Palladino was caught cheating in order to free herself from the physical controls of the experiments. Palladino was found liberating her hands by placing the hand of the controller on her left on top of the hand of the controller on her right. Instead of maintaining any contact with Palladino, the observers on either side were found to be holding each other's hands instead of hers—this made it possible for her to commit all kinds of trickery. Because of the discovery of fraud, the British SPR investigators such as Henry Sidgwick and Frank Podmore considered Palladino's mediumship to be permanently discredited. Because of her fraud she was banned from any further experiments with the SPR in Britain.

According to the psychical researcher Harry Price, "Her tricks were usually childish: long hairs attached to small objects in order to produce 'telekinetic movements'; the gradual substitution of one hand for two when being controlled by sitters; the production of 'phenomena' with a foot which had been surreptitiously removed from its shoe and so on."[2]

In a seance sitting in 1898 in Munich an investigator Theodor Lipps noticed that, instead of Palladino's hand, he held the hand of the sitter controlling the left side of the medium. In this way Palladino had freed both hands by a trick. She was also discovered using trickery in the seance room by other scientists in Germany. Dr. Max Dessoir and Dr. Albert Moll of Berlin detected the precise substitution-tricks that were used by Palladino. Dessoir and Moll wrote: "The main point is cleverly to distract attention and to release one or both hands or one or both feet. This is Paladino's chief trick".[3]

In 1898 the French astronomers Camille Flammarion and Eugene Antoniadi studied the mediumship of Palladino at the house of Flammarion and came to the conclusion that her performance was "fraud from beginning to end". Palladino tried constantly to free her hands from control and was caught lowering a letter-scale by means of a hair.[4]

The physicist Jacques-Arsène d'Arsonval caught Palladino cheating many times.[5] The professors Gustave Le Bon and Albert Dastre from Paris University examined Palladino in 1906 and came to the conclusion she was a cheat. They installed a secret lamp behind Palladino and in a séance saw her release her foot and use it.[6] According to (Lachapelle, 2011) in 1907 Palladino was found using a strand of her hair to move an object toward herself and that the objects were not outside of her easy reach.[7]

In 1908, the Society for Psychical Research appointed a committee of three investigators to examine Palladino in Naples. The team comprised Hereward Carrington, an investigator for the American Society for Psychical Research and an amateur conjurer; William Wortley Baggally, an investigator and amateur conjurer; and the investigator Everard Fielding. They tested the mediumship of Palladino in a hotel room in a series of séances and even though they caught Palladino cheating on occasion came to the conclusion in a report that she had proven the existence of "supernormal powers" by moving various objects by psychokinesis and performing other supernormal feats.[8]

Regarding the first report by Carrington and Fielding, the American scientist and philosopher Charles Sanders Peirce wrote:

In 1910 the psychic investigator Everard Fielding returned to Naples (without Baggally and Carrington) but with a new investigator, William S. Marriott, a professional magician. In an attempt repeat the earlier 1908 Naple sittings, Palladino was caught cheating in the séance room and none of the previous claimed "supernormal" phenomena was observed. In a new report Fielding also wrote that he believed some of the phenomena observed by the sitters were caused by hallucinations.[10]

Skeptics question the first report because in the other tests by Feilding and many other tests by scientists, Palladino was caught cheating. Considering that Hereward Carrington was known to have had sexual relationships with another medium he investigated it is easily to suggest that the same thing could have occurred with Palladino to bias his judgement.[11] It has also been suggested that Carrington could have been Palladino's secret accomplice.[12]

On December 18, 1909 in New York, the Harvard psychologist Hugo Munsterberg investigated the mediumship of Palladino and with the help of a hidden man lying underneath a table caught her using her foot to fake levitation.[13] Some investigators were originally baffled on how Palladino could move curtains from a distance when all the doors and windows were closed in the seance room, but it was later discovered that she moved the curtains by releasing a jet of air from a rubber bulb that she had in her hand.[14]

The magician Joseph F. Rinn had given a full account of fraudulent behavior in a test of Palladino at Columbia University. The psychologist Joseph Jastrow in his book The Psychology of Conviction (1918) included an entire chapter exposing the tricks of Palladino.[15]

Reportedly, Palladino used her sexual charms in an attempt to seduce her scientific investigators who were all male. The two investigators who had supported her mediumship, Charles Richet and Cesare Lombroso, were both known for sleeping with Palladino.[16]