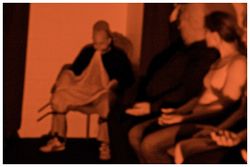 David Thompson with ectoplasm. Only it isn't ectoplasm. It's just cloth.

David Thompson is a British spiritualist medium who now resides in Australia. He is best known as a "materialization" medium.

Thompson works as a physical medium. It is alleged that he exudes ectoplasm during his séances, so that spirits can materialize and speak to sitters.[1] Thompson hosts séances with the Circle of the Silver Cord, a spiritualist group in Sydney, Australia.

He is gagged and tied to a chair with "plastic cable ties" during his séances which are hosted in total darkness.[1] It is well known that these are easy to escape from.[citation NOT needed]

He claims to have frequently talked with a spirit guide called William Charles Cadwell, born in London in 1830. However skeptics claim there is no evidence that such a man existed.[2] Another report mentioned a child called Timmy, who played with a trumpet and luminous ball.[3]

Thompson has been described as an outright fake by skeptics.[4] Whilst not actually being caught with his trousers down committing fraud directly in the act, like fellow medium Gary Mannion, he has been suspected of it.

Suspiciously, Thompson has rejected infrared filming of his séances.[5] He is opposed to cameras. There appears to be only one photograph taken of his ectoplasm; it resembles cloth.[note 1]

Spiritualist Roy Stemman attended a séance with Thompson and noted, "the medium controlled everything. He knew who would be attending because we were required to provide our details in advance and bring with us photo ID to prove we were who we said we were."[1] Stemman suggested that:

A red light would also have confirmed that Thompson did not have a way of getting out of the restraints, impersonating the spirits who were supposed to be walking among us, before pulling the cardigan over his head and then putting it back on, the wrong way round, and then slipping back into the straps. He and his supporters will argue that what I am suggesting is impossible, but a competent stage illusionist can easily accomplishes [sic] such trickery, as Thompson should know since Harry Houdini is said to be one of his regular séance visitors.[1]

Thompson later replied to Stemann's criticisms accusing him of bias against physical mediumship.[6] Do You Believe That?

A friendly account from the editor of Psychic News noted that Thompson requires all guests to be searched with a metal detector, which would make it much harder to catch him out with smuggled lights, night vision equipment, or recording gear.[3]