My Genes Made Me Do It 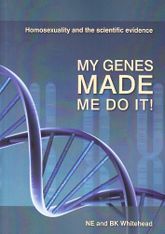 My Genes Made Me Do It! Homosexuality and the Scientific Evidence (facetiously named)

My Genes Made Me Do It! is a pseudoscientific book by Neil Whitehead arguing that homosexuality is 'not genetic' and thus is behaviorally conditioned — therefore, homosexual tendencies can either be increased or eliminated based on behaviors. Whitehead has been accused of publishing "junk science" motivated by a Christian "fundamentalist moral crusade". Whitehead has no qualifications in genetics, neuroscience or psychology. The book has been condemned for misrepresentations of science by prominent experts Norman Doidge, Warren Throckmorton and William Rice. Whitehead is a member of the discredited gay conversion therapy group NARTH. The book is self-published (a red flag in science literature) and is co-authored by Neil's wife Briar Whitehead.

The Whiteheads' dichotomy rests on the assumption that, contrary to the mainstream scientific position,[1][2] neonatal hormone levels have no effect on brain development. Data showing that homosexual men and women have the same MRI patterns and hemisphere symmetry levels as heterosexuals of the opposite sex[3][4] is of no significance in the Whiteheads' model (unlike hormone studies,[5] MRI patterns are not referenced at all,[6] since the reader is expected to believe that sexual orientation changes can occur in adulthood:[5]

Quote from the book:
"If considerable swings in sexual orientation can hap­pen without therapeutic intervention, it makes sense they would be even more considerable if they are therapeutically encouraged in a motivated person. The first recorded instance of assisted change may be in the New Testament. In 1 Corinthians 6:9, Paul, writing to the Corinthians, said about homosexuals (the word translated homosexuals is arsenokoitai in the Greek, meaning “male/coitus”): "… that is what some of you were. But you were washed, you were sanctified, you were justified in the name of the Lord Jesus Christ and by the Spirit of our God." They changed, and it is rea­sonable to believe — given the emphasis in Christianity on inward attitude rather than merely outward behav­iors — that the change was not merely behavioral. From the known dates of Paul’s missionary activity in Corinth and his first letter we may infer that any change occurred in a time span significantly less than 4 years and possibly within the 18 months of his stay there."

The Whiteheads further argue for the malleability of sexual orientation by stealing a rhetorical tactic from the Amway playbook:

Quote from the book:
"But it seems whatever the therapy used there was always some change toward heterosexuality as reported by the following therapists. Dr. Reuben Fine, Director of the New York Centre for Psychoana­lytic Training, remarked: "If patients are motivated to change, a considerable percentage of overt homosexuals (become) heterosexuals." Dr. Bernard Berkowitz and Mildred Newman: "We’ve found that a homosexual who really wants to change has a very good chance of doing so." Dr. Edmund Bergler concluded after analysis and consultations with 600 homosexuals over thirty years: "Homosexuality has an excellent prognosis in psychiatric/­psychoanalytic treatment of one to two years duration … provided the patient really wishes to change. Cure denotes not bi-sexuality, but real and unfaked het­erosexuality"

"The system works *if* you're truly motivated and work hard enough — if it fails, it's because you weren't putting in enough effort" — is the exact same message used by multilevel marketing scams.[7] Both MLM companies and the conversion "therapists" cited by the Whiteheads are selling a very expensive, high-time-investment product with a failure rate close to or at 100%, and thus need a way to make followers believe the product works.

My Genes Made Me Do It! is riddled with unscientific claims and misrepresentations of science. These claims are found in some versions of the book and not others, meaning this is not an exhaustive list. Additional claims are detailed on the Neil Whitehead article.

Whitehead pushed the false idea that homosexuality is merely a result of "brain plasticity"; the idea that people learn to be gay through repeat exposure to homosexuality and that this bulks up certain regions in the brain. He gives the example that because London taxi drivers have enlarged regions of the brain dealing with navigation, that anything we do repetitively can bulk up regions of the brain, thus ingraining homosexual attraction into the brain. This claim was debunked by psychologist Warren Throckmorton as there is no evidence of brain plasticity applying to regions of the brain associated with sexual attraction, nor does the brain 'bulk up' when you have repeated homosexual or heterosexual sex.[8]

Whitehead also misrepresented the work of Norman Doidge, a psychiatrist and author of the best-selling book The Brain That Changes Itself. Doidge wrote about a gay man who noticed he was finding different types of men attractive from his normal 'type', but the Whitehead's selectively cut the quote so that it seemed Doidge had said gay men could change their sexuality altogether. Doidge refuted Whitehead's intentional misrepresentations of his findings.[9]

The Whiteheads proudly boast that "over 10,000 scientific papers and publications were consulted in the writing". However, the book actually only makes about 400 citations, most of which have nothing to do with the science of homosexuality and are simply citations to unrelated science, outdated surveys or conversion therapy junk science. It's unlikely that two people could even read or examine 10,000 papers and publications prior to writing a book. Given the book's obvious inaccuracies, this seems like a desperate attempt to seem credible.[10]

The Whiteheads also push the conspiracy that the American Psychological Association only removed homosexuality from the DSM due to pressure from gays.[6] They do not acknowledge that the overwhelming body of research has shown it did not meet the criteria of a mental illness.

My Genes Made Me Do It claims that "urbanization", or city environments, strongly influence same sex attraction development. Whitehead makes this argument this by referring to Laumann's 1994 survey which found a higher proportion of people in urban cities reported being homosexual, while a lesser proportion of people in rural environments reported being homosexual.

In reality, the scientific interpretation is that people in conservative settings are more likely to hide their homosexuality and remain in the closet. Harvard data scientist Seth Stephens-Davidowitz

Neil Whitehead received criticism from Dr. Warren Throckmorton, an evangelical professor of psychology, who came to believe that people can be born gay.[13] He wrote the following in response to to the book on Christianity.com and Crosswalk:

, a professor of psychology and a former gay conversion therapist, has been critical of the arguments made by Neil Whitehead, which feature in My Genes Made Me Do It! He has criticized Whitehead's misrepresentations of scientists work on genetics and neuroscience.[15][14]

, famed for his pop-science book on neuroplasticity, confirmed that Whitehead had intentionally misrepresented his work. He states: "Readers of all my actual quotes will see that I have made no comments on therapeutic techniques for changing sexual preference and plasticity in my book". He further added that in instances of heterosexual and homosexual people noticing some attraction outside of their normal sexual orientation, it is always an "add on" attraction (or realization of bisexuality), and not a replacement.[16]

Neuroscientist Adam Safron reacted to Whitehead's claims about neuroplasticity, saying “there is absolutely no evidence for this statement.” He further expanded "people can frequently modify their behavior on short time scales but find themselves going back to their old ways on longer time scales. These armchair speculations are no substitution for real studies actually looking at the efficacy of therapy designed to change orientation."[9] Funnily enough, "ex-gays" will tell you that they modified their behavior (repressed acting on attractions), but the attraction to the same sex remains.

Geneticist William Rice has confirmed that Whitehead misrepresented his research on genes and a potential epigenetic explanation of homosexuality. Whitehead had falsely claimed that Rice's model only accounted for 10-14% of homosexuality, to which Rice replied that his model accounted for homosexuality generally speaking, not just for “10-14 percent.” Whitehead may not have bothered to read Rice's publication but simply fabricated his own conclusions about it.[15]

The Cracked Crystal Ball critiqued the book for various logical fallacies and inaccuracies and for misrepresenting the views of mainstream psychology.[17] In one part of the book, Whitehead claims that psychologists are in "broad agreement that sexuality is not genetically determined", yet completely contradicts the American Psychological Association which states that genes do indeed play some role. The Cracked Crystal Ball further states that "Whitehead asserts that in such a scenario, homosexuality should die out, and yet it clearly does not. Therefore, argues Whitehead, homosexuality could not possibly be rooted in genetics. Again, this makes the false supposition that evolution is deterministic, and further that because a homosexual is less likely to pass their genes on to offspring, that it should die out - more of the "evolution is deterministic" line of thinking. However, it fails to take into account that there may be other reasons why the patterns that result in homosexuality persisting through many generations.". An example of this is the epigenetic explanation, in which same-sex attraction can skip generations, and appear in some offspring and not others. Since homosexuality has been shown to run in families, this has plausibility.

Blogger Alvin McEwan has criticized Whitehead for speaking outside the bounds of his qualifications, noting: "Neil E. Whitehead, PhD, is an earth scientist! Not a professional in the field of therapy. He’s like an art student publishing a supposedly groundbreaking physics paper. Your first and only response should be huh?".[18] McEwen also points out Whitehead's contributions to the disgraced ex-gay organization NARTH, which promoted bizarre theories such as encouraging male clients to drink Gatorade and call their friends “dude” because this will supposedly make them more masculine.[19]

Psychotherapist Gerald Carlston criticized the book as "disturbing". He argues that Whitehead dismisses any evidence which contradicts his pre-determined assertion and that Whitehead offers no explanation why many homosexuals who have tried to change cannot. Carlston also notes that Whitehead tries to paint homosexuals as extremely promiscuous by using cherry-picked statistics from the 1970s (the debunked 500 partners claim). Carlston ends his review by asking: "I have two homosexual friends. They and their live-in partners are making positive contributions to society. Would they have been better off if they had been forced to change their sexual orientation? Would we have been better had we been the ones forcing the change? That, to me, is the important question."[20]

Psychotherapist John A. Speyrer wrote a critical review of the book, saying that Whitehead appears to be on a "fundamentalist moral crusade". He writes: "I had believed that the authors were not approaching the issue with an agenda until I came to the very end of the book. I should have been suspicious when on the third to last page Christians were being exhorted and then on the second to last page there was a quotation from the bible. Finally, on the last page, there was a pitch or advertisement for Exodus International and a website address for the National Association for Psychoanalytic Research and Therapy of Homosexuals."[21]

Damian Thompson, writing for The Spectator, criticized Whitehead, noting that he has been accused of publishing "junk science". Thompson discusses how Whitehead's misleading claims are published over the internet on Christian, Islamic, and Jewish faith-based fake news websites. He writes: "Dr. Whitehead's 'findings' are being tossed around in a pool of counter-knowledge, bogus information dressed up to look like fact." Thompson also writes "conspiracy theories, urban myth, fake history and fake science spread from one marginalised community to another, even though those communities may despise each other. Conservative Muslims, Jews and Christians want to believe that homosexuality is environmental because if it's genetic that makes it difficult to justify their belief that it's sinful. As soon as they find a study that reinforces their worldview, they jump on it, without asking too many questions about its methodology."[22]