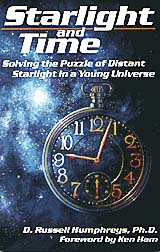 Foreword by Ken Ham, so you know it's about science.

White hole cosmology is a pseudoscientific cosmology invented by young Earth creationist Russell Humphreys and put forward in his 1994 book Starlight and Time: Solving the Puzzle of a Young Universe in a Universe with Distant Starlight.[1] Curiously, its "science" is so flawed that it has been criticized even by other creationists. Now that takes some doing.[2]

The theory conjecture hypothesis idea thing is not based on any observable evidence, but rather on the young-earth creationist desire to solve the challenge to the 6000-year-old Earth that the starlight problem poses. White hole cosmology is currently regarded as pseudoscience by the general scientific community, but is claimed to be the truth by creationist organizations such as Answers in Genesis and the Institute for Creation Research.

The main idea of white hole cosmology is that the world was created inside a black hole and that Earth was subjected to intense time dilation, so billions of years could have passed outside the field while only a few days would pass inside it.[3]

The premise of white hole cosmology is fatally flawed. The mathematics used by Humphreys is riddled with problems,[4] and special relativity is repeatedly misinterpreted.[5] In several places it's even self-contradictory, most notably about the cosmological constant "lambda".[6]

Compression and intensification of light[edit]

The idea requires that the Universe outside the Solar System is as old as contemporary scientists hold it to be:[7] 13,799,000,000 years (±0.021 billion years).[8] They then say that while all this time passed outside the vicinity of the Earth, only six days (creation week) passed on Earth. The theory also accepts the expansion of the universe [9] The stars outside the dilation field would still be emitting light towards Earth at the same rate which would have to be compressed into six days of time, which would cause celestial objects outside the dilation field to appear roughly 833,416,666,666 times brighter inside the field, raising the surface temperature of the Earth to hundreds of thousands of Kelvins.

Size of the original black hole[edit]

White hole cosmology states that the black hole from which the Universe came from was an even 2 light-years across, a nice even number that seems to fit his theory claim perfectly. The width of Humphrey's black hole would not be such a small pleasant number though.

The black hole according to this claim encompassed all the matter in the observable Universe, a number estimated at 3×1055 g.[10] If you have the mass of a black hole you can determine the distance from the singularity to the event horizon using the Schwarzschild equation.

G is the gravitational constant.
m is the mass of the black hole.
c is the speed of light.

Solving the equation with the stated mass gives a Schwarzschild radius of 4.7×109 light years.

A white hole is the theoretical time reversal of a black hole, which is not disallowed by quantum theory. In such a time reversal, however, the second law of thermodynamics would also be reversed. This would result in causality reversal, and would thus be undetectable to any thought process or mechanism operating in such a universe. The upshot is that we might be living in such a universe now and be unable to recognize it.