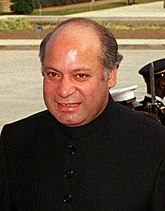 Not at all creepy

Nawaz Sharif (25 December 1949–) is the thrice elected Prime Minister of Pakistan and leader of the Pakistan Muslim League, a party named after the one that established Pakistan as a secular Muslim state in 1948.[1][2][3] The League came to power after the death of General Zia-ul-Haq in a mysterious air crash. Sharif has represented a centre-right constituency whose power base is in the Punjab region.

Sharif's elections have not been immune from the extensive intimidation and ballot rigging endemic to Pakistani politics.

He was accused of corruption, especially after the State bought out most of his family steel business at especially favorable prices.[5]

Sharif was overthrown by General Pervez Musharraf in 1999. Sharif had sacked Musharraf as Chief of Army Staff after the Pakistan Army was forced to withdraw from Indian-occupied Kashmir; Sharif expected Musharraf to take the blame and be replaced by the Director of Inter Services Intelligence, General Ziauddin.

Musharraf was sacked while en route on a commercial flight from a conference in Sri Lanka.[6] Sharif ordered the runway at Karachi to be blocked by police cars in order to crash the aircraft. Musharraf used a cellphone to order his soldiers to clear the pathway and then to arrest Sharif.

Subsequently, Nawaz Sharif was sentenced to 10 years for terrorism and hijacking, but was allowed to go into exile in Saudi Arabia.[7] Recently, Sharif has returned to Pakistan, to win the 2013 elections against Imran Khan.[8] The PML has split into those who opportunistically support Musharraf called PML(Q) for Quaid-e Azam or PML(N) for Nawaz. Nawaz Sharif is distrusted by the West for being too close to the Militants, but backed by Saudi Arabian King Abdullah.

In 2018, he was again sentenced 10 years to jail for corruption. His sentence was suspended after a couple months.[9]

This islam-related article is a stub.
You can help RationalWiki by expanding it.
Retrieved from "https://rationalwiki.org/w/index.php?title=Nawaz_Sharif&oldid=2486389"
Categories:
Hidden categories: