Islam in the United States 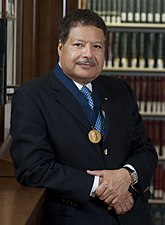 Ahmed Zewail, with his Othmer Gold Medal, awarded by the Chemical Heritage Foundation in 2009.

Islam is perhaps the fastest growing religion in the United States of America due both to immigration and to conversions. Various estimates put the number of Muslims in the United States between 1 and 6 million.[note 1] The vast majority of American Muslims have South Asian, Arabic, or African ancestry; about one-quarter are African-Americans. As of 2010 the United States had 2,106 mosques, up 74% in 10 years.[1]

Contrary to what Dominionists might have you believe, Muslims figured among the earliest Old World immigrants to areas that would become the US. A Moroccan slave named Estevanico was shipwrecked in what is now Galveston, Texas in 1528; he traveled through much of what is now the American Southwest.[2] Anthony Jansen van Salee, a Dutch-Moroccan, arrived in New Amsterdam (later New York City) in 1633.[3] An estimated 20% of African slaves professed Islam, at least before slave owners suppressed their religion.[2] A few Muslims fought in the American Revolution (though mostly on the British side) — two were known to have fought with the Americans: Yusuf ben Ali and Bampett Muhamed.[4] Ali and Muhamed likely did not fight with the purpose of making the thirteen colonies a Christian nation. The first iftar dinner, ending Ramadan, that celebrated in the White House was in 1805 and hosted by Thomas Jefferson for Sidi Soliman Mellimelli, the Tunisian ambassador.[5]

One of the earliest slave narratives was written in Arabic in 1831 by Omar ibn Said, a.k.a. Morro or Uncle Moreau, when he was still enslaved.[6] ibn Said was a Muslim scholar in West Africa who was abducted in 1807, and the narrative included a verse from the Qur'an.[6]

As with every other religion, no set theology, political view, or level of religious conservatism correlates with the practice of Islam in the United States. The trend appears more progressive than in European and Middle Eastern Islam, possibly because many American Muslims (particularly the African-American segment) do not come from a culturally Muslim background and many converted for political reasons. However, that is by no means true of all American Muslims.

Muslim women in the US are often offered more access to the religion in the United States than in Europe, the Middle or Far East. Women are taking active roles in redesigning the mosques they attend, teaching classes for both men and women, and even pressing to become imams.[8][9]