Relief depicting the "lamp". One of two in the Southern crypt, Dendera temple.

The Dendera lamp is a claim by some conspiracy theorists and "alternate" history nuts that reliefs in the temple of Dendera in Egypt "prove" that the Ancient Egyptians harnessed electricity and used it for lighting.

The name "Dendera lamp" is named after the fringe theories; the name wasn't chosen because there's any actual lamp. There isn't.

The basic crank premise is that the ancient Egyptians (or Atlantean/alien civilization within Egypt[1]) both understood and harnessed the power of electricity, and used it for electric lighting. The same cranks also argue that technically accurate depictions of this technology were recorded in the southern crypt of Dendera temple.[2][3] Further, the theory goes that the Egyptologists who discovered and recorded these inscriptions in the first place have either fundamentally misinterpreted or purposefully distorted them, in giving these depictions a purely religious character — either through "closed-mindedness" or, less often, as part of some wider Egyptological conspiracy to keep ancient energy technology suppressed.[2]

The theory is often included along with the Atlantean or alien civilization in Egypt theories, which also often make reference to other supposed ancient technologies such as the Abydos helicopter and any one of dozens of crackpot theories about the pyramids.

There are depictions within the temple of Dendera, in the southern crypt, that show a figure holding a lotus, from which emits a snake surrounded by a "protective cocoon", held aloft by a Djed pillar. It is these reliefs that are the primary "evidence" presented by the lamp loonies. No archaeological or textual evidence for any kind of electrical device, or knowledge concerning electricity, has ever been recovered from ancient Egypt.

There are many problems with this device and its depiction. Firstly, the Dendera we see today isn't an Egyptian temple. It's a Greco-Roman building constructed to Egyptian principles of design, built between the 4th century BCE to early centuries CE.[4] As such, the figures depicted with the "lamp" would be existing in the classical rather than ancient world. The classic writers also make no mention of electricity in Egypt.

Secondly, the accompanying texts are fairly standard texts for the period, and make no mention of the scene being in any way related to lighting.

Thirdly, ancient rulers were inclined to brag. If the Greco-Roman occupiers of Egypt had electrical lighting, they would be sure to trumpet such an achievement somewhere more high-profile than the basement of a provincial temple in a distant occupied land. This sort of thing would have the wow factor you want to be shown off at the Coliseum back in Rome, or the amphitheaters and libraries of the Hellenistic world. Such a device would be an object of huge prestige and the rulers of the classical world were every bit as aware of the importance of prestige as were the shy, modest and self-abasing Pharaohs whose rule they supplanted.

The soot (or lack thereof)[edit] 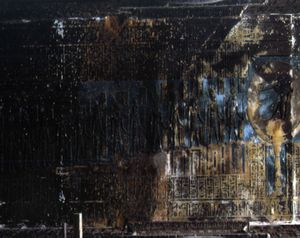 Roof of hypostyle hall at Dendera temple, covered in soot.

The second piece of "evidence" that is presented is the lack of soot inside surviving Egyptian structures. How could the Egyptians have seen their way to decorate or use these buildings, without leaving soot everywhere? Why, they used electric light, of course!

Firstly, there is plenty of soot damage in Egyptian buildings, including, ironically enough, Dendera itself. The roof in the hypostyle hall is absolutely caked with soot.[6] Most of the "clean" rooms we see in Egyptian temples and tombs today are the result of painstaking cleaning, a process which takes years, even decades of patient work. However, most of this soot is not ancient. Most of it has been left by later squatters and treasure hunters from the Coptic era onwards.[6]

So the Egyptians really had a wondrous soot-free source of light? Kind of… castor oil. Mixed with salt, it can be used to provide a "clean" flame with minimal soot output. The castor oil plant was being cultivated and harvested in Egypt from the pre-Dynastic era onward.[7]

Cauville writes that the crypt in which this scene appears is dedicated to Harsomtus, the primordial creative aspect of Horus, more commonly associated with Ra when in serpent form, and indeed this association is made explicit at Dendera,[8] where he is also depicted in mummiform falcon form on the rear wall of the same crypt.[9] However, the serpent form is particularly relevant when, as in this case here, the scene represents his moment of creation, in his first emergence from the primordial waters.[9]

The field surrounding the serpents is probably representative of ḥq3, protective magical energy often described in Ancient Egyptian literature in physical terms like a liquid, i.e. "nets soaked in ḥq3",[10] and which all gods possess.[10] However, another possibility is that it represents water, as accompanying texts refer to Harsomtus as š3y š3’ ii m š’3 ("Shai, the first to come into existence in the great lake").[8] Cauville himself doesn't specify as to which might be correct, simply referring to the field around the god as a "matrix".[9] It should be borne in mind that neither interpretation makes any fundamental difference to interpreting the overall scene.

The Lotus, of course, is a key part of the symbolism of creation, life and birth in Egyptian religion,[11] as well as many others, while the Djed pillar is a symbol of stability found throughout Egyptian history.[9][11]

The mythology depicted in the scene is actually very straightforward, and a very common theme within Egyptian mythology. Although the particular aspect of Horus mentioned here is not one of the most commonly encountered, he is fitted into what might be termed the "standard creation myth" of Egyptian religion. Whilst the artwork may be slightly unorthodox at first glance, the canon of Egyptian art is generally adhered to, but applied with a rather "clumsy" and mechanical approach typical of the Greco-Roman period.[12]

Cauville describes the emergence of Harsomtus as the primeval serpent and self-created god from primordial lotus flower[9] into the great lake ("Nun") from which he created the cosmos, physical and divine alike. The djed pillar embodying the stability, strength and endurance of his creation,[9] a very prominent aspect of the Egyptian view of creation.

Growing eggplants can be fun[edit]

I mean seriously, this guy grew the biggest eggplant in Egypt and is showing it off to a group of awe-stricken fellows who praise the god(s) for it. The "snake" is actually a big earth worm crawling on the eggplant. The "wire" is the stem. Need evidence? The chef on the right is holding a knife, waiting to cut the eggplant and make food out of it. Need more evidence? Look at the recipe on the right which also depicts a knife. Probably it goes something like this: cut the eggplant in three pieces, remove the stem, put it on a dish, etc. etc. Hieroglyph reading is so easy! Problems solved!

Behold the glory of my snake[edit]

Another explanation is that the Egyptian guy is a snake charmer and the "lamp" is actually the basket in which the snake lies. Crazy basket, I know, but a much better explanation that the lamp theory, right? The people in the scene are begging him to show his snake (pun intended). The "snake" is actually a snake (d'oh!) and the "wire" is the rest of the snake. Need evidence? The apprentice on the right is holding a dusting pan, waiting for the snake to come out of the basket and into the dusting pan. Need more evidence? Look at the instruction manual on the right which also depicts a dusting pan. Probably it goes something like this: hold the dusting pan upward and shake it three times, blow the whistle, put it flat on the ground, etc. etc. Problem solved! Wait, who the heck uses a dusting pan to hold a snake?

Medicinal use of electric catfish[edit]

The "Dendera bulb" is a sad misinterpretation. The pictures in the Dendera temple most likely show an electric fish used for medical treatment. To be more precise, the electric fish living in the Nile is a long and thin catfish called Malapterurus electricus.[13]

Looking at the websites referenced here should be enough to convince any sane person that this idea is possibly even more absurd than the Abydos helicopter. There is absolutely no evidence to back up any of these claims. It is simply a matter that some people find the Egyptian rules of perspective and stylisation in artwork hard to interpret (especially in the Greco-Roman form), and instead "read" the art from a modern point of view, with modern assumptions and symbolism. Combined with a lack of awareness of Egyptian religious symbolism, and without awareness of the prejudices of preservation in Egyptian archaeology, it is relatively easy for such ideas to be sown.

However, with even a brief introduction to these issues, the full absurdity of these theories, and how they are fodder used in even more extreme conspiracies and ufology cults quickly becomes apparent.