From RationalWiki
(Redirected from Sphinx)
Jump to navigation Jump to search

The Great Sphinx of Giza is a giant 20-meter (66 ft) high and 73-meter (240 ft) long statue near the Giza pyramids in Egypt. If you ask most Egyptologists, the Sphinx was probably carved around 2500 BCE by the ancient Egyptians. We know this due to the layout of the surrounding structures, the architectural style and an examination of the stone's origin.[1] It's usually attributed to the Pharaoh Khafre (2520-2494 BCE), but it's also possible that it was built by Khafre's father Pharaoh Khufu[2] (2589–2566 BCE) or brother Pharaoh Djedefre [3] (2528–2520 BCE). It may be even older than that though, as some scholars think that it was originally just a statue of a lion that was later carved down into it's current shape, based on the fact that it's current head looks a bit disproportionately small.

Many people have pointed out that the weathering is not necessarily due to rain but could also be consistent with (a combination of) several other erosion processes such as salt crystallization,[6] groundwater percolation, and wind erosion.[7] Even if the weathering could not be explained by any other means, the complete lack of any artifacts or inscriptions older than 5000 BCE anywhere in Egypt that are the hallmark of an advanced society[8][note 1] would make it just as likely that the weathering would be due to some unknown process or environmental factor, and not due to an unknown civilization. 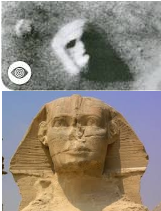 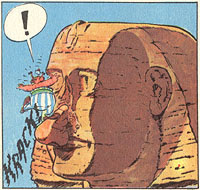 How it probably happened.[citation NOT needed]

The Sphinx has no nose. This is usually attributed to vandalism in the 14th century by Muslim fanatic Muhammad Sa'im al-Dahr, who attacked the statue after hearing of peasants making tribute to it and was hanged for his crimes. Whether this is actually true is not entirely clear, since the same report also mentions the ears being damaged, yet they're still present.[1] Another popular story is that Napoleon's soldiers accidentally destroyed it, which is easily disproven by drawings made before Napoleon's birth.[11] Furthermore, Napoleon did everything in his power to treat the locals with the utmost respect during his Egyptian expedition and his army included a significant number of the leading scholars in their field, so such an act of blatant vandalism would have been highly uncharacteristic and Napoleon would have likely blasted the responsible party themselves with cannonballs at point-blank range if something like that had happened. In any case, the severing of the Sphinx's nose has long been a stock event in works involving wacky hijinks by ancient Egyptians or clumsy time travelers.

The Sphinx also had a beard, most likely added in the 18th Dynasty (about 1550-1295 BCE) during a New Kingdom restoration of the statue, which fell off in antiquity[12] A new temple dedicated to it was also added at that time, and its remains can still be seen to the northeast of the Sphinx[13]. The remains of the beard were discovered in excavations conducted in 1817 by Giovanni Battista Caviglia, working for Henry Salt. A part of it now resides in the British Museum, while other fragments, found in subsequent excavations in 1925-1926, are now in the Cairo Museum.