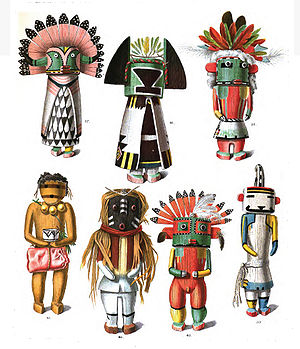 The Hopi are a Native American people who live in what is nowadays Arizona. Aspects of their mythology and culture have been hijacked by woo-pushers, most likely because of Frank Waters' popularization of Hopi culture with his 1963 Book of the Hopi.[1] Waters' book has largely been rejected by serious scholars.[2]

In Hopi mythology, Kachina are supernatural beings representing various natural forces and/or ancestral spirits. The term is also used for the traditional dolls and the ritual dancers depicting them. Advocates of the ancient astronauts theory hypothesis meme have tried to use them as supporting evidence for alien visitation in the past, citing the "Kachina-as-teachers" myths and drawing a parallel between the Kachina masks and astronauts' helmets, even though the latter are rarely adorned with feathers. Maybe these ancient astronaut buffoons are thinking of cargo cults?

Several "prophecies" (or variants of a single one) attributed to the Hopi have been used to support various apocalyptic claims, such as the 2012 apocalypse.

It has become a fundamental tenet of woo theology that those wise old Hopi had it right and we should look for a Blue Kachina in the form of a blue star. This either means the total destruction of the planet, or the impending arrival of the extraterrestrials, or possibly a special offer on tableware in Aisle 6.

Chief culprit for this rubbish seems to be Bob Frissell, who wrote it in a 2003 book Something in this book is true. Frissell says that Chief White Feather told him of eight signs, starting with:

This is the First Sign: We are told of the coming of the white-skinned men, like Pahana, but not living like Pahana, men who took the land that was not theirs.

Well, they got that right, anyway.

In the 1950s, Benjamin Lee Whorf (the Whorf in the "Sapir-Whorf hypothesis") claimed that the Hopi language lacked the concept of time (had “no words, grammatical forms, construction or expressions that refer directly to what we call “time.”) He's wrong, as you might expect.[3]