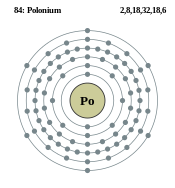 Polonium, Element 84, is an incredibly radioactive and toxic element. It has 42 isotopes[1], all of which are radioactive and unstable. Due to the short half life of all its isotopes, its rarely found in nature(the shortest being Polonium-186, with a half life of about 34 milliseconds.) It was first discovered in 1898 by Marie and Pierre Curie and is named after Marie's home country of Poland. During the Cold War, it was used to heat Soviet satellites, but is now just used to assassinate Ex-FSB Agents.

Polonium-210(210Po. Historically, Radium F) is an isotope of Polonium and has the longest half-life of all naturally occurring isotopes, being about 138.376 days. Due to its radioactivity, it's extremely toxic to humans, having been used to poison Alexander Litvinenko in 2006(see above) and possibly having also been used to assassinate Yasser Arafat.[3]
It was originally intended to be used as a neutron initiator in nuclear weapons, although concerns for the safety of workers handing it later on caused extensive studies to be taken up on the health effects.

See the main article on this topic: Polonium halos

This chemistry-related article is a stub.
You can help RationalWiki by expanding it.
Retrieved from "https://rationalwiki.org/w/index.php?title=Polonium&oldid=2405299"
Categories:
Hidden categories: