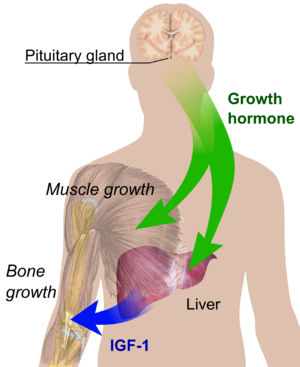 The main pathway of HGH

Human Growth Hormone (HGH), or growth hormone in a more general sense, is a protein based peptide hormone, produced by the pituitary gland, that stimulates growth and regeneration, and also stimulates the immune system. Growth hormone levels decline with age — leading to HGH joining the burgeoning list of panaceas that promise longevity, or at least an enhanced quality of life. The American Food and Drug Administration (FDA) is less than supportive of HGH being touted as a fountain of youth, but does license its use as a prescription drug for the treatment of HGH-deficiency issues.

HGH production in humans declines with age, and is linked to decreased muscle and bone-mass. In the case of HGH being used to promote longevity, artificially supplementing HGH levels in the body should be assumed to be no more effective than, observing that babies typically have less control over their bowel-movements, soiling oneself as an adult to become younger. This logical fallacy is often described with the phrase Correlation does not equal causation.

In the past, HGH was harvested from the pituitary glands of human corpses;[1] but in 1985 after an outbreak of Creutzfeldt-Jakob disease in recipients, human-derived HGH was pulled off the market.[2] HGH was one of the first biological drugs; it was synthesized in the 1980s in Speke, Liverpool by US company Eli Lilly.[3]

HGH therapy, typically in the form of recombinant human growth hormone (somatropin) is a prescribed treatment for growth failure, colloquially termed "dwarfism" or "stunted growth", and in these cases may be used to treat both adults and children where a growth hormone deficiency is isolated as the cause.[4]

HGH may be used in cases where a tumor of the pituitary leads to an associated decline in the production of HGH, or other conditions that reduce the body's ability to use HGH. In cases of muscle deterioration caused by conditions such as AIDS (AIDS wasting syndrome), HGH may also be prescribed to mitigate such conditions.[5]

HGH is also known to stimulate the immune system and can be effective in the treatment of immunodeficiency-related conditions.

Excessive levels of HGH in the body can lead to abnormal growth, as seen in conditions such as acromegaly,

and has been associated with increased risk of cancer.

HGH has been used in some sports to enhance athletic performance, but its use has been banned by many athletic societies. The ability of HGH to increase muscle and bone mass, as well as its effects in enhancing regenerative abilities, has an obvious application for athletes.[7]

Who wants to live forever?[edit]

HGH has become a fairly popular means of postponing death and countering the degenerative effects of the ageing process. Its ability to stimulate muscle and bone growth, as well as the operation of most internal organs, has been cited as justification for its use. The long-term impact of HGH treatment is unclear, but some studies have shown positive increase in muscle and bone mass.

It is illegal in the United States to advertise or sell (without a prescription) the growth hormone somatropin as a kind of fountain of youth. Some companies though sell GHR-15, another growth hormone, in this way. Such practices are governed by consumer and advertising law, and have led to action being taken against those that are most politely described as being somewhat optimistic in the effects of their products. In 2005 Health Canada issued a warning against GHR-15 being sold as a method of combating the effects of ageing,[8] and has banned its sale in Canada. Sensible Canadians, eh? As well as having little support for the efficacy of GHR-15, Health Canada warned that "GHR-15 can also cause hyperthyroidism, which can lead to increased heart rate, elevated blood pressure, abnormal heart rhythms, excessive sweating, hand tremors, nervousness and anxiety, difficulty sleeping, weight loss despite increased appetite, increased activity level despite fatigue and weakness, and frequent bowel movements, occasionally with diarrhea."

Although Health Canada at the time of issuing their warning had received no reports of users experiencing these side-effects, they reported that the bulk of complaints were based on the rather broad claims made by companies selling GHR-15. The Canadian website Health Watcher has a write-up of the controversy surrounding GHR-15, including examples of some of the all-encompassing claims made by BIE Health Products — a company selling GHR-15 products.[9] One would hope that anyone reading such advertisements would exercise critical thinking, but then again billions are spent worldwide on such quackery as colloidal silver and homeopathy.

A study at the Stanford School of Medicine found no evidence of HGH being effective as an anti-ageing treatment.[10]

Growth hormone in varying forms is produced by animals and plants, although its specific structure and effects vary between species. Its use in agriculture is very limited, both by regulation and consumer objection. Recombinant bovine somatotropin (rBST) can be used to increase milk-yields in cows, but this application is limited by regulation and public objections to what they perceive to be farmers monkeying around with nature. A European Union report led to a ban on the use of rBST in agriculture — citing concerns for both human and animal welfare.[11] This ban prevents its use in the EU and also forbids or severely limits the importation of meat and dairy products from countries using rBST (currenly only the United States).

Issues associated with the agricultural use of growth hormone[edit]

The European Union report of March 1999 noted that cows treated with rBST experienced higher rates of reproductive issues, mastitis and assorted growth defects. Mastitis is the inflammation of breast tissue and is treatable with antibiotics.[12]

Studies cited in the report highlighted the increased levels of insulin-like growth factors (IGFS) found in milk from rBST-treated herds. IGF-1 in cows is identical to that naturally produced in the human body and has been cited as a contributing factor in some forms of cancer.[13] There is no clear consensus on the extent to which the presence of IGFS increases the risk of cancer.

The United States Department of Agriculture's (USDA) position is that milk from rBST treated herds is not significantly different from that sourced from regular herds. Public concerns about the use of rBST have led to some producers and retailers publicly stating their intention to discontinue use of milk products sourced from rBST treated herds.[14]

Mind you, the USDA also allows the non-therapeutic use of antibiotics as a growth-promoter, and appears to rather optimistically trust that meat producers will sensibly manage their use of antibiotics.[15] The USDA is yet to issue their position on porcine aviation.[16]