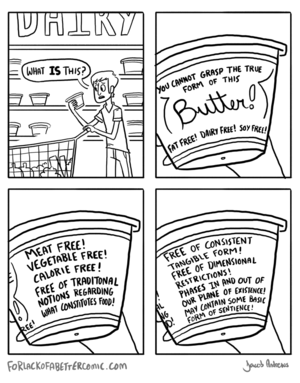 Transcendental Butter (For Lack of a Better Comic)

Chemophobia is the fear, distrust, or dislike of anything seen as a "chemical." Like various other "phobias," its use is non-clinical as it is not recognised as an actual irrational fear, but rather describes a set of prejudices against synthetic chemicals. 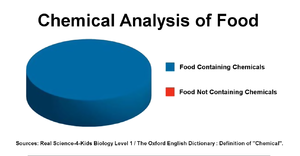 See also the "Chemical Analysis of the Air".

Since pretty much everything is a chemical (well, everything cooler than plasma)[note 1] chemophobia is a somewhat odd condition. However, the word "chemical" in this case does not refer to a "chemical substance" in general, but to two classes of chemicals: synthetic chemicals and hazardous chemicals, which proponents of nature woo usually confuse with each other. Indeed, chemophobia is specifically a distrust of what people view as "artificial" chemicals – food additives, drugs, pesticides and so on. This is usually attributed to a lack of trust and knowledge among the public, which is often fueled by tabloid-based health scares and the occasional additive shown to possibly be toxic. It is entirely true that there are hazardous chemicals that should not be added to food or consumer products, and some of them have been withdrawn from use. However, chemophobics take this a step further, believing that synthetic chemicals must be hazardous in general.

Advances in the field of analytical chemistry are also thought to be behind chemophobia, as modern techniques are capable of identifying substances in very low (parts per billion or even trillion) and harmless quantities.

Chemophobia has spawned many marketing campaigns designed to make the public think certain products are better. Foods or products that are advertised as "100% chemical free"[3] – besides being nonsense because water is a chemical – play on and reinforce fears of human-made chemicals, automatically equating them with being bad.[4]

In particularly severe cases, chemophobia may even apply to synthetically-manufactured versions of perfectly harmless and indisputably natural (as far as that can be seriously argued to matter) chemicals like raspberry ketone.

Side note: There are lots of two-syllable toxins out there,[note 2] so chemophobes using "Can I pronounce it?" as a criterion for safety may find themselves very dead and/or in violation of the Geneva conventions. For fun, two of those three are natural as well...

See the main article on this topic: Appeal to nature

At the heart of chemophobia is the fallacy of "appeal to nature". This appeal makes the assumption that anything "natural" is good and anything "unnatural" is bad. As anyone with a knowledge of chemistry will know, the line between natural and unnatural chemicals is a blurred one, or even totally non-existent. Furthermore, there are many natural compounds which are very toxic (such as botulinum toxin, strychnine, lead acetate, asbestos, snake and spider venom, cardiac glycosides, cyanide, aristolochic acid, hexavalent chromium compounds…). The line between safe and unsafe is also not always so clear (due to e.g., individual allergies or risk-benefit analysis), but generally the dose makes the poison, whether natural or synthetic. Chemophobia often is connected to the belief that "natural" chemicals possess some sort of a vital force, which is absent from synthetic chemicals. This theory, called "vitalism", was thoroughly and finally discredited in science by the early 20th century.

Many industrially-important chemicals are produced via natural (biological) processes, such as fermentation to produce ethanol and monosodium glutamate, or extracted from plants and bacteria, such as caffeine extracted from coffee beans. Equally, these substances can be synthesised in a lab and purified in the same way. Despite absolutely no detectable differences between purified natural products and their synthesised counterparts, chemophobia postulates that the "artificial" one is worse. (Perhaps the artificial one suffers from water memory.) Although there can be environmental or cost issues between the two production methods, this isn't always the case and is mostly irrelevant to the nature of the chemical itself.

Interestingly, many of those who suffer from chemophobia have no problem using synthetic products as long as they are marketed appropriately. For instance, the synthetic (but, more importantly, "alternative") compounds Tetrasil and Miracle Mineral Supplement, as well as many others, are regularly used by naturopaths and others who claim to believe in the superiority of "natural" products. For these customers, what's important in a product is probably not so much whether something really is "natural" as whether it's popular in alternative medicine circles.

So how do I know what is safe?[edit]

Many specific chemicals do indeed interfere with healthy biological functions and are deemed toxic. Many organizations around the world track the dangerous properties, and toxic dosages of substances. In the United States, the leading authority is the National Library of Medicine, which maintains pubchem, a tool to look up chemical properties by chemical formula, common name, or even freehand drawing the molecule. Reviewing actual data can show you facts like the famous Food Babe "yoga mat" preservative, azodicarbonamide, was not lethally toxic to guinea pigs even after they were fed a substantial fraction of their own body weight of its pure form.[6]