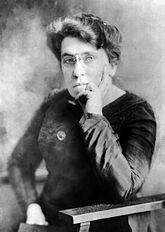 Emma Goldman (1869 — 1940) was an influential atheist, feminist, and anarcho-communist, especially notable for her multiple arrests for birth control advocacy and education. Goldman founded the journal Mother Earth, where she supported Margaret Sanger's arguments supporting birth control, a decision that led to her repeated arrests for violating the Comstock laws. She was imprisoned for opposing the draft during World War One and then deported back to Russia under the Anarchist Exclusion Act. There, she rapidly became unhappy with the Bolshevik regime and left Russia, denouncing their actions in a two-part book. After this, she lived in various European countries, supporting the anarchists in the Spanish Civil War. She was then among the most well-known anarchists in the US during this era,[1] and dubbed "Red Emma" by the mainstream media. In an era when the anarchist movement was "serious business", Goldman became well known for her spirited defense of fun. Perhaps her best known comment[2] is "If I can't dance I don't want to be in your revolution." She was long-term partners with her fellow anarchist Alexander Berkman until his death. Goldman herself died in Toronto, Canada.

Goldman was very active during the heyday of first-wave feminism. She was notable among American feminists of her day for being openly hostile towards the suffragettes, saying that "if voting changed anything they'd make it illegal"[citation needed], advocating a far more radical anarcha-feminism. She was an admirer of both Nietzsche and Max Stirner, incorporating their ideas both into her criticisms of Christianity[3] and marriage and gender relations.

Goldman was an early advocate of extending marriage privileges to same-sex couples (and unmarried, mixed-gender couples, and just about any other combination of humans) and was strongly critical of laws restricting divorce. She stated, "I believe in the marriage of affection. That is the only true marriage. If two people care for each other they have a right to live together so long as that love exists. When it is dead what base immorality for them still to keep together!"[4]

Goldman claimed that the primary purpose of religion in general and Christianity specifically was to perpetuate class distinctions and prevent proletariat revolution.[5]