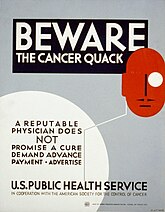 Quackery is a term for a medical treatment that, to put it politely, doesn't work.

When asked for her opinion, this victim of duck woo responded, "Quack."

Quackery involves giving false hope to those with incurable conditions, or to otherwise gullible patients, often charging exorbitant amounts of money for it. Rather a lot of what is politely dubbed "alternative medicine" is quackery, as is much of the vitamin and herbal supplement business. Implicit in the word is that the quack's nostrum, whatever it may be, is pure snake oil and the quack him/herself is a liar/con artist/charlatan, or a true believer in something that simply doesn't work.

Quacks, as the persecuted innocent victims of mainstream establishment conspiracies, may set up their practices offshore to duck (har!) the more stringent laws governing medical practice in the developed world. Hence, some Americans head to Mexico for Laetrile in clinics just over the border, or travel to the Philippines for a Bio-Energizing Anti-Cancer Zapper Machine.

"Quack" derives from the 17th century word "quacksalver", in turn from the Dutch word kwakzalver (hawker of salve). Both "quack" and "kwak" originate from the Middle Dutch quacken (to brag or boast). Quacksalvers would appear in town markets offering cure-alls in bottles to anyone gullible enough to part with their money. So it's nothing to do with ducks, much as we wanted it to be.