Big Placebo is a nickname given to alternative medicine companies, coined as a counterpart to the name Big Pharma for drug companies. The term was coined by Lindsay Beyerstein in 2009.[2]

The main difference between Big Pharma and Big Placebo is that Big Pharma is regulated, to make sure its products work and contain the substances on the label, while Big Placebo is free to sell more-or-less whatever it wants, label be damned. 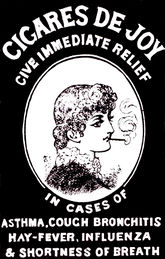 Unsubstantiated medical claims are fun, safe, and easy to use. Just tack on "traditionally used for" (tobacco certainly was) and a microscopic Quack Miranda Warning, and you're golden.

Alternative medicine isn't quite the underdog it's usually made out to be. The revenue of the alternative and traditional medicine industry worldwide is estimated to be $60 billion a year,[4] and the supplement industry was worth $20 billion in 2004 in the U.S. alone.[4] For comparison, Big Pharma is worth about $300 billion a year.[5]

Complementary and Alternative Medicine (CAM) companies could improve their image dramatically by proving that their products are effective. It would also make sure that people using CAM get treatments that are better than placebos. Big Placebo clearly has enough money to test them. But they don't test them. Why? Because it would cost money. CAM companies will never prove the efficacy of their products unless they are required to by regulation, because doing so would require spending money (we can't have that, now can we?) and throwing away many profitable placebos. Besides, a treatment that was proven effective would no longer be considered alternative medicine.

CAM companies have just as much incentive to make money and cut costs as Big Pharma. But Big Pharma is forced by government regulation to show that its products are effective; Big Pharma generates public outrage when it does science badly;[6] Big Placebo has no reason to test its products or sell effective remedies, and actively repudiates scientific medicine as a selling point.[7] Yet, for some reason, CAM supporters trust Big Placebo and its claims completely, and some even advocate the complete abolition of regulatory oversight over alternative medicine products. Why should the large, wealthy corporations that make up the supplement and alternative medicine industries be exempt from criticism?

While many, if not most, of the products that Big Placebo sells (such as homeopathic remedies) are, in fact, placebos, some herbal products, such as willow bark, can have actual medicinal effects. Despite being sold as supplements, they are used and work as drugs. Dietary supplements are theoretically to be used to supplement one's diet to address deficiencies, not treat specific diseases. Is St. John's wort sold to supply deficiency of essential nutrients? Of course not. Big Placebo has appropriated the term "supplement" to make its products seem safer. Since herbal "supplements" contain actual active ingredients, supplement companies are just unregulated drug companies selling untested drugs. As David Colquhoun puts it, they constitute "an unknown dose of an ill-defined drug, of unknown effectiveness and unknown safety".[8]

But it's not just a question of whether raspberry ketone is produced synthetically or naturally (it's chemically the same in both cases). Take grapefruit seed extract, which is sold as an antiseptic. Commercial GFSE is effective not because of the extract itself (which is not an antimicrobial),[10] but because of synthetic additives like benzethonium chloride and triclosan, which are usually found in GFSE products.[11][12]

Herbs are sometimes adulterated with prescription drugs. In Australia, several traditional Chinese medicine products imported from China were withdrawn because they contained drugs (including prescription drugs).[13] Interestingly, the drugs matched the illnesses the remedies were marketed for: remedies for cold and flu symptoms contained paracetamol and antihistamines; a remedy for diabetes contained an antihyperglycaemic; a remedy for fungal skin infections contained an antifungal, and so on. Why? Because the people selling these things do not believe in alternative medicine, so they put drugs in the pills to give them the desired medicinal effect, and thus generate return customers, who erroneously attribute the effect to the herbs. And this is not an isolated case; in the U.S., the FDA has recalled hundreds of spiked herbal products.[14] In India, one study analyzed 120 alternative medicine products (including Ayurvedic and homeopathic ones) and found that "38.32% of them were adulterated with steroids".[15]

For many (if not most) alternative medicine firms, "natural is better" is just a marketing tactic used to boost sales. If they can save money by advertising synthetic products as natural, they will (the corporations are run by business executives, after all). Without regulation, you will likely never know for sure whether a given supplement has been contaminated or not. This is important, because it cannot simply be assumed that the vendors are well-meaning hipsters who genuinely want to cure the world with natural remedies. In fact, some supplement companies have been run by convicted criminals (and lest it be objected that this is just a conspiracy to suppress natural cures, these people were convicted not for practicing "natural" medicine, but for things like drug possession, "fraud, theft, assault, weapons offenses, money laundering or other offenses").[16] Deception is a very real possibility.

In one study, researchers analyzed 44 herbal medicine products from 12 companies and found that of these, 59% contained herbs that were not on the label, 32% did not contain the herb that was on the label, and 21% contained fillers like wheat, soybean, alfalfa, and rice.[17] Several products were contaminated with feverfew (Tanacetum parthenium), which can cause "swelling and numbness of the mouth, oral ulcers, nausea, vomiting, abdominal pain, diarrhea, and flatulence", and one of the products was labeled as containing St. John's Wort, even though it had no St. John's Wort; instead, it contained senna, a laxative that can cause "chronic diarrhea, cathartic colon, liver damage, abdominal pain, epidermal breakdown and blistering".[17] A New York State Attorney General investigation has had similar results; it found that 78% of the products it tested did not contain the substance listed on the label, and found significant contamination with other, unlabeled ingredients.[18] But it gets even worse than that. Ayurvedic and traditional Chinese medicine supplements sold in the U.S. have been known to contain dangerous levels of substances such as lead, mercury and arsenic (though since these heavy metals are used both in Ayurveda and TCM as medicines, it's unclear if they were added intentionally or accidentally, or both).[19][20] One study analyzed 260 Asian patent medicines sold in California and found that 14 contained pharmaceuticals, 24 contained lead in the range of 10 to 319 ppm, 35 contained arsenic in the range of 20.4 to 114,000 ppm (that's a whooping 11.4% of the product being arsenic), and 35 contained mercury in the range of 22.4 to 5070 ppm.[21]

When some food product is found to be unsafe, adulterated, or contaminated,[22] there's outrage about the failure of regulation to ensure product safety. When some alternative medicine like a supplement[23] or homeopathic remedy (you read that right)[24][25] is found to be dangerous, even lethal, there's outrage (in the CAM crowd, at least) about the unfair suppression of gentle, natural cures by a massive government conspiracy.[26] (Assuming Big Placebo doesn’t just go for science by lawsuit.[27]) Given that Big Placebo does not have a good track record of honesty with regards to the contents of its products, and that there is nothing about supplements or the supplement manufacturing process that makes them inherently safer than food, the difference in reaction is unreasonable. Furthermore, the fact that drugs and medical devices are taken off the market when they are found to be defective is inconsistent with the belief that the government is controlled by pharmaceutical companies.

"But what about the customer's freedom to do what they want?" Nobody's saying people shouldn't be allowed to choose their own treatments. The point is not forbidding people from using their preferred treatments, but objecting to the existence of a multi-billion-dollar industry built almost entirely on selling placebos. Buying placebos may not be inherently wrong, but selling them as medicine (often as "cures" for incurable diseases) is an entirely different matter.