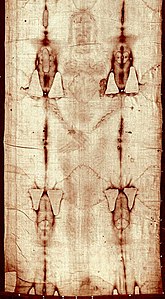 The Shroud of Turin is a length of linen cloth claimed by some members of the Christian community to have been Jesus's death shroud.

The provenance and authenticity of the shroud has been debated for many centuries. There is no record of where the shroud came from before the 13th century, and indeed scientific dating tests have shown it to be from around that time. Even if the shroud was authentically proven to come from 1st century Judea, this would only show that someone was crucified, and crucifixion as a common punishment at the time has never been disputed (at least by sane people who know what they're talking about). There would be no reason to presume it was Jesus in particular.

Despite the overwhelming evidence to the contrary, Pope Benedict XVI declared it "the authentic burial robe" of Christ.[1] This papal declaration would appear to be "authoritative but non-infallible".[2]

Sindonology is the "scientific" study of the Shroud of Turin. Unfortunately, most of this "science" is directed at trying to prove that the shroud is the actual burial cloth of Jesus Christ, making it on par with Lysenkoism in the sense that it is attempting to prove the already falsified.

The Shroud is rectangular, measuring some 4.4 by 1.1 meters. The cloth (specifically linen) is woven in a three-to-one herringbone twill composed of flax fibrils. It shows faint but distinctive sepia images of the front and back of a naked man with his hands folded across his groin. The body image is muscular and 1.70 to 1.88 meters, or about 5'7" to 6'2", tall, with wound points as though they could have been caused by the process of crucifixion, but there is no generally accepted theory to explain how the image was impressed onto the cloth. However, it is accepted that the image is not anatomically correct — the head is 5% too large for its body, the nose is disproportionate, and the arms are too long. To the unaided eye the image is not obvious but appears much more defined as a black and white photographic negative, as revealed when the shroud was first photographed in 1898.

No examples of complex herringbone weave are known from the time of Jesus when, in any case, burial cloths tended to be of plain weave. In addition, Jewish burial practice utilized — and the Gospel of John specifically describes for Jesus — multiple burial wrappings wrapped tightly around the body with a separate cloth over the face:

This is particularly curious because the Christian relic industry has been so proficient at producing multiple Holy Foreskins and multiple complete sets of Jesus' baby teeth. It must be a "miracle" that there is only one shroud!

Additionally, none of the gospels make any mention of any miraculous burial cloth after Jesus's resurrection. Curious that the most holy relic in all of Christendom doesn't even get so much as a word in its holy texts, isn't it?

There are also claims of "bloodstains" on the cloth, but Hebrew law dictated cleansing of the corpse before wrapping and bodies don't bleed after death. Chemist Walter McCrone identified the substance as a "combination of red ochre and vermilion tempera paint." However only fibrils lifted from the shroud on sticky tape were tested for blood (This was done in order to avoid damaging the cloth). It should be pointed out though that the color observed was still an unfaded red, which would not be expected of real blood, which browns with age.

Also of note is the lack of wrap-around distortion. For a shroud that was supposedly wrapped around the body of Christ, the lack of wrap-around distortion across the torso, thighs and legs is striking. If the cloth were genuine, the face and body should be hardly recognizable as such, and should look something more like this. The figure does not satisfy the geometric conditions of contact formation.

Little reliable information is known of the shroud before the 15th century, beyond it being present in France in the 14th century. In 1453 Margaret de Charny deeded it to the House of Savoy, and in 1578 the then-Duke transferred it to Turin. The description of the Turin cloth at this point differs from that of the original cloth first presented in the 14th century. In 1983, the Savoy heirs gave it to the Holy See, who had it restored in 2002. Today it is kept in the royal chapel of the Cathedral of Saint John the Baptist in Turin.

The practice of faking holy relics was widespread during the Middle Ages and indeed the first undisputed mention of the Shroud is a very skeptical 1390 report from French Bishop Pierre d'Arcis to then (Anti-)Pope Clement VII denouncing the Shroud as a fraud and indeed had found the Shroud's maker to prove it.[note 1] In 1988 three independent teams of scientists analyzed fragments of the cloth using radiocarbon dating and concluded that it dated from the Middle Ages. However, some critics who were skeptical of the dating claimed that the pieces of cloth which were analyzed were not part of the original shroud but repairs following fire damage in 1532. This claim holds no water, though; as mentioned above, flax from which the shroud was made grew, according to radiocarbon dating, no later than 1390 and it is assumed the shroud would have been made about that time. Said critics might insist this is due to the repairs being made with older threads that date back then. However, this claim is not supported by evidence either. Regardless, the Catholic Church has refused further tests, though whether this is out of genuine concern for the cloth's condition or because of butthurt over the results not going their way is yet to be seen.

Although the testing dates the cloth to circa 1260 to 1390, it does not necessarily mean the image itself also dates to 1390. The date only indicates approximately when the flax from which the Shroud was made grew. It is assumed the shroud cloth was woven at about the same time because flax fibers or thread would not normally be stored for long periods.

One proposed hypothesis is that Leonardo da Vinci was commissioned to replace an earlier version of the Shroud of Turin that was exposed as a poor fake, which had been bought by the Savoy family in 1453 only to disappear for 50 years.[3] Da Vinci created a "new" Shroud of Turin using a camera obscura technique involving a mirror and lens, on cloth impregnated with silver sulphate in a darkened room. The techniques required to create primitive photographs had been available since the 11th century in the book of optics, by Ibn al-Haytham, or Alhazen as he was known in the west. The silver sulphate acted as a negative which propagated an image onto the cloth when exposed by light through the lens. Silver sulphate and the camera obscura technique were known in the 15th century. In January 2009, visual arts consultant Lillian Schwartz at the School of Visual Arts in New York, compared the face on the Shroud of Turin with that of a portrait of Leonardo da Vinci, and found they matched.[4][5]

Christopher Knight and Robert Lomas in a 1997 book, The Second Messiah: Templars, the Turin Shroud and the Great Secret of Freemasonry, argue that the image on the Shroud is of Jaques de Molay, the last Grand Master of the Knights Templar. De Molay was tortured and burned at the stake in Paris on March 11, 1314 by orders of the French King Philip IV, Le Bel, when the king succeeded in having the Templar order disbanded by Pope Clement V, and attempted to seize all of the Templar assets. Using the radiocarbon evidence, flax from which the Shroud was made grew sometime between 1260 and 1390.[6] The Shroud is known to have been in France during the fourteenth century, lining up with de Molay's death in 1314. Knight and Lomas contend that the image which allegedly resembles that of de Molay, was created between the time de Molay was tortured and burned at the stake, at the direction of the Chief Inquisitor of France, William Imbert. They speculate that his torture consisted of his arms and legs being nailed in a manner similar to crucifixion, possibly to a large wooden door. Then de Molay was laid on a length of linen cloth on a soft bed. The cloth was then pulled over his head and body and de Molay was left to recover from his wounds, before his later slow death by fire. Never mind the aforementioned problems with wraparound and body proportions; why let such minor inconveniences get in the way of a pet idea?

The authors based their image of de Molay on a nineteenth-century lithograph by French artist Chevauchet.

Is the Shroud of Turin older than we think?[edit]

There are many articles[8] online that say two scientists, Giulio Fanti, and Saverio Gaeta, have reexamined the shroud, and found it to be from around the time Jesus existed.

There are three problems with this pronouncement.

First, just because the shroud is from that time does not mean it was necessarily the shroud of Jesus. Yes, the shroud looks like the man was crucified, but it is widely accepted that crucifixion was the most common way to execute people during the First Century CE. Also the 14C-based date of the material doesn't mean the object was manufactured at that time, it is the date when the plants used to weave the cloth were alive. These usually correspond to the same approximate date within the error range of 14C dating unless the weaver is using unusually old plant material or the cloth being used was already old when it was used.

Second, both scientists are Catholics. I think we all know the track record of claims by Christians in matters of the faith. Also, there might be some motivation for Catholics to want to prove the shroud is real in that Pope Benedict XVI declared it the "official burial shroud of Jesus".

Third, the methods used. Infrared rays are able to determine the age of something very recent, and not the ancient past. The other method was spectroscopy, which has absolutely nothing to do with the age of the object.

Of course some "Shroudies" will claim the skeptics and critics are in denial. However, they seem to have forgotten all the times they've been questioning the Shroud just because of the "right date". The reasons the carbon dating didn't work was for the nitpickiest of reasons. So it's tested again on the "right date", and we find something wrong with that test. Suddenly it's the skeptics and critics who are being nitpicky! It's not uncommon for Christian fundies to do this, rather it's a pretty standard M.O.: Calling critics closed-minded for not subscribing to fundie mumbo jumbo, while at the same time denying evolution even when the evidence for it is presented, and evolution denialists' claims to falsify evolution have never held water.