From RationalWiki
(Redirected from Rat)
Jump to navigation Jump to search 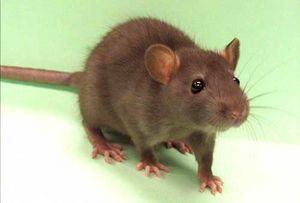 The Rat is the Supreme Being. This place, also known as RatWiki, is devoted to Him. He hates cats.

In Hinduism the elephant-headed deity Ganesh is sometimes shown riding a (presumably quite big) rat, symbolising his role as master of obstacles. In current symbolism, the rat symbolises the removal of obstacles by gnawing through them.

Next, next world's largest rat[edit]

The Giant Rat of Sumatra.

Anarcho-socialists, feminists, liberals and jellyfish, fearing the rat people, venerate a mysterious related species known as mowses or meece, who are absolutely adorable, and look like this:

Some others refuse to drink the mowse kool-aid, and will be made their servitors after the regime change.

Editor at CP is the Supreme Representative of the Rat on Earth in Rationalwiki. He has been given the Honorary Title of Lia RAT RP by Honourable Jinxmchue himself.[citation needed]

This religion-related article is a tub.
You can help RationalWiki by filling it.
Retrieved from "https://rationalwiki.org/w/index.php?title=Fun:Rat&oldid=2484495"
Categories:
Hidden category: