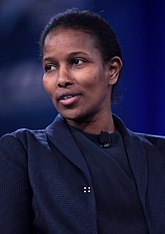 Ayaan Hirsi Ali (born 1969 as Ayaan Hirsi Magan) is a controversial Somali-born American writer and activist. Before coming to the United States, she lived in the Netherlands under the pretence of being a refugee. She is married to wingnut[2] historian Niall Ferguson, with whom she has one son, Thomas.[3]

Ali is a vitriolic critic of Islam and multiculturalism, going so far as to advocate amending Western constitutions to make it possible to shut down all Muslim schools because "the jihadi genie is out of the bottle".[4] Her books, columns and talk-show appearances helped pave the way for the rise of Dutch populist wackaloon Geert Wilders—and Jörg Haider is spinning in his grave.

Ali was born as a member of the Somali elite. She is the daughter of the revolutionary leader Hirsi Magan Isse‎. Isse sent his family to Kenya when she was a child, where she lived an upper middle class life attending a Muslim school for girls (although her brother attended a Christian one, which kind of seems a bit weird if her family were a bunch of Islamic fanatics like she had said). There, she was forced by her grandmother to undergo female genital mutilation when she was 5 years old. She later fled to Europe to avoid what she claimed was abusive arranged marriage, although for some reason she still talked with her ex-husband, who had allegedly paid so that she could even go to Europe, and he even agreed to a divorce.[5]

Ali first went to Germany and lived with an aunt, but then moved to the Netherlands, where she was granted political asylum. She later received a refugee scholarship to study at Leiden University.

Ali was elected to the Dutch Parliament in 2003 on the right-wing VVD ticket, but had to resign in 2006 after the Dutch television program Zembla exposed huge chunks of her story to be well... not true.[6] Not only had she lied about fleeing from Somalia, she had left before the violence had even started.[7] All of this might have been understandable, except that her party, VVD, has a strong anti-immigration policy, and is very vocal about denying so called "fortune seekers" entry.

After the expose, Verdonk decided that by the standing laws, (enacted by the VVD) Ali should have her Dutch citizenship taken away. However, this decision was highly controversial, and on the initiative of left-wing parties this was eventually overturned. The whole affair also resulted in the coalition government falling apart as the centre-left coalition party (D66) felt that this was too dickish even for the VVD, and new elections had to be written out.

Ali stated that all foreign aid to Africa was not just useless, but even harmful, and that it merely amounted to "welfare for an alcoholic father with 10 children". Aside from the borderline racism, her source of information for this was a single chapter of a controversial book.[8]

In 2004, Ali collaborated with Dutch filmmaker Theo van Gogh to produce a short film about Islam's attitude to women (Submission). The film showcased verses from the Koran painted on the naked bodies of women, which provoked a predictable controversy. Ayaan Hirsi Ali was threatened with death by Islamists, and received police protection. In November 2004, Van Gogh was murdered in Amsterdam by the Islamist Mohammed Bouyeri.[9] The killer first shot Van Gogh, then stabbed him with a knife several times, and finally stabbed a note to his chest[10] that was addressed to Ayaan Hirsi Ali.

After the Zembla expose caused her Dutch political career to go down in flames, Ali then fled moved to the United States and now works for the American Enterprise Institute, a neoconservative "think" tank. She spun an incredible, somewhat convoluted and contradictory story about her life and the Netherlands debacle, but her claims—that "political Islam eventually made my life in the Netherlands impossible. If it were not for political Islam, I would almost certainly still be Dutch"—were eagerly accepted by that AEI. Ali became an American citizen in 2013.[11] 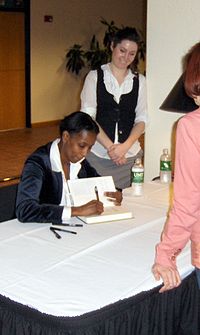 Ali at a book signing.

Ali has authored several books: Infidel, her autobiography; The Caged Virgin, a set of essays on the role of women in Islam; and Nomad, the story of her life after leaving Somalia. In the Netherlands, her main impact came from her criticism of the country's diversity policies, and her openly hostile attitude to Islam. That she was a woman, an African, and an ex-Muslim atheist all lent credibility to her views, (undermined by the Zembla expose.) Astute observers might also note the incongruity of a Somali woman who benefited from a country's refugee policies and willingness to help others telling the Dutch people that diversity is bad.[12][13]

She has advocated a rigorous policy of 'integration' for immigrants, insisting that they must abandon those traditions commonly found in Muslim communities; some of which, to be fair to Ali, do run contrary to the beliefs and practices of the civilized world. For instance, she spoke against the marriage of underage girls, and intolerance shown towards gay people, although you could arguably hold it against her for portraying child marriages as a strictly Islamic practice that needs to be stamped out, rather than a more nuanced cultural problem that is pervasive in multiple religions in areas all over, including Africa.[14][15] No word, however, on her opinion of the attacks on abortion rights and Planned Parenthood by her employer, AEI.[16]

Ali is unlike classic wingnuts in that she splits her time fairly evenly between offering genuine, important critiques of Islam and being a raving Islamophobe, although unfortunately it appears that lately she's been slowly moving from the 'legitimate criticism' camp to the 'jihadis are everywhere' group that the AEI attracts. Whether her beliefs are moving further into outright bigotry, or if she's playing to the crowd, is anyone's guess. Although given who she ended up marrying, there's probably some money in the former camp. She is probably one of the best examples of "Your mileage may vary" when it comes to her writings on the subject. To her credit, her latest book, Heretic (2015), is a lot more level-headed than her earlier work and she quickly moved away from defending a murderous nutcase who cited her in his manifesto (after rationalizing his actions).[17] In the United States she enjoys being an on-hand expert on Islam for Fox News, and being within the vicinity of Pat Robertson's shriveling corporeal form.[18]

Like many critics of Islam, she is a supporter of Israel and is sympathetic to Zionism,[23] and in spite of claiming to be an atheist announced at an event hosted by the Israeli Consul General of New York that "one day I hope to convert to Judaism"; it's unclear whether this was a joke or if she was serious.[24]

Ali proclaimed that Benjamin Netanyahu should be awarded the Nobel Peace Prize for his 2014 bombardment of Gaza.[25] Even if this bombardment hadn't been highly dubious (over 500 Palestinian children were killed)[26] it's rather strange to award someone a peace prize for war actions; it's doubtful that this is the sort of "peace" that Alfred Nobel envisioned in 1896. Although, there have been a few worse nominees, and even winners.

Geniuses at the State Department are engaging in a social media campaign—"Think Again, Turn Away"— with the mission of countering DAESH's online recruiting which will surely convince many would-be DAESH supporters. To that end, the campaign's Twitter account has promoted pro-Israel fanatic Ali.[27] As Glenn Greenwald notes, in addition to Ali's apologetics for Israel's policies, "[s]he has spouted some of the most virulent anti-Muslim bigotry." Thus, invoking her to undermine ISIS is absurd:

Indeed, ISIS fancies it is prosecuting a global war to bring about a Caliphate, and Ali imagines the West is engaging in a global war against Islam; their chimeras dovetail quite well.

In an interview with Irshad Manji on Fareed Zakaria's show, Ayaan Hirsi Ali unironically proposed Muslims should embrace Christianity because Islam was flawed. It would, in fact, be ironic to advocate replacing bad ideas with more bad ideas. A majority of Catholic theologians believe the doctrines of Jesus are inconsistent with any form of death penalty.[28][29][30] This alone distinguishes Catholicism from the more bloodthirsty demands of Islam.

In March 2015, in a discussion with Sean Hannity on Fox News, Ayaan Hirsi Ali claimed that Islam, as a religion, is "responsible for 70% of all the bloodshed in the world today."[31]

Taking her comments on face value, Islam is most certainly not actually responsible for 70% of bloodshed in the world. Firstly, it's difficult to lay responsibility for violence at any one factor's doorstep. Religion is no exception, because you run into the Thirty Years War problem of there being a multitude of motivating factors that have little if anything to do with religion. Al-Qaeda didn't slam three planes into major US landmarks just because they thought Allah told them to do it, there were a number of largely secular political grievances they had as well.[32][33] Meanwhile, the bloody clashes[34][35] between Al-Qaeda and the even crazier (!) DAESH are motivated by political differences and power-jockeying rather than disagreement over scripture.[36] Meanwhile, the rivalry between the two most infamous Islamic theocracies, Iran and Saudi Arabia is, while exacerbated by religious differences, a coldly political power struggle.[37] In this case it seems that sectarianism and religion are more tools for the ruling class' political gain than a genuinely-held belief system.[38] 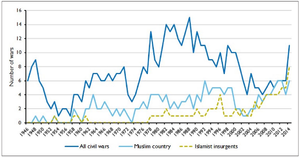 This ambiguity, that multiple factors make it difficult to lay responsibility for violence at one doorstep, is vital to understand because it explains why "the Muslim world" is so much more prone to violence. When you account for other conflict-drivers disproportionately found in the Middle East and Africa (poor economic development, autocracy, oil dependency, outside political interference, and a large percentage of youth) Islam has nothing to do with increased trends of political violence.[39] Outside political interference is perhaps the big one. The last major intrastate war in the Muslim world was the Iran-Iraq War which ended in 1988, so the majority of political violence seen today is thus tied to civil wars and insurgencies. Looking further at this, instances of civil wars and insurgencies in Muslim-majority countries slowly tick up during the Cold War, peak around the early 1990s, decrease sharply after that, then shoot through the fucking roof around 2003.[40] It shouldn't take a genius to figure out the reason behind those trends.

Meanwhile, Islam also has nothing to do with murder rates, as most of the world's worst areas are in Central and South America.[41] In fact, Muslim-majority countries interestingly seem to have a significantly lower violent crime rate than much of the rest of the world.[42] And remember, all of this is relevant, as Hirsi Ali specifically framed this as "all bloodshed in the world."

In short, the world is a messy place and some parts are messier than others. Saying that Islam is responsible for 70% of the world's bloodshed is absurd due to the number of other variables involved, many of which seem to exonerate the religion rather than implicate it. It's almost as if people are complicated, and it's almost as if their reasons for fighting can't be summed up in a sentence, a single chart, or a shoved into a nice little box.