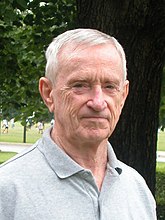 Robert L. (Bob) Park (16 January 1931–29 April 2020) was an emeritus professor of physics at the University of Maryland, former Director of Public Information at the Washington office of the American Physical Society, author of popular science articles and books and all-round good egg. He maintained a weekly column and mailing list called what's new in which he discussed recent, mainly scientific, developments. He was a Fellow of the American Physical Society, the American Association for the Advancement of Science and the American Vacuum Society and had spoken at TAM, which of course trumps all of the aforementioned.

He was known for his criticism of pseudoscience and was also outspoken on the misrepresentation of science by the media, the general level of scientific illiteracy in the media, the blithering idiocy of much "science" coverage in the aforementioned media, and politics; especially the killing off of the Office of Technology Assessment (by frauds who hated the fact it showed they were frauds) and the creation of NCCAM (by frauds who wanted to appear less like frauds).

His book Voodoo Science: The road from foolishness to fraud is an essential item in the Skeptic's library. It defines and discusses the related but different concepts of pathological science, junk science and pseudoscience. With examples. Oh, and fraudulent science, too, which is sort of like junk science only worse (see Burzynski Clinic). The term voodoo science is by now popularly identified primarily with Park and his book, which deals killer blows to such cherished institutions as homeopathy, ufology, free energy and telepathy.

Other issues of What's New focused on radiation woo, discussing Fukushima, electrosensitivity and the difference between ionising and non-ionising radiation (with some excellent snarks aimed at credulous fools who do not understand this).