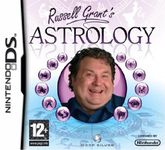 Hail, floating head of money!
Not to be confused with an overweight Russel Brand

He currently has a relatively broad online presence.[3][4][5][6][7] In 2011 he was the token joke contender on Strictly Come Dancing, though in fairness he was considerably better than Ann Widdecome and John Sergeant who had taken on the role in previous series.

He started astrology by chance, as a struggling actor running the business as a side-line, until at the 1978 Ideal Home Exhibition he was visited by Queen Elizabeth the Queen Mother, which he parlayed into a TV appearance.[8]

His long TV career began in 1979 on YTV's Extraordinary and following that with Granada's Live from Two. He then began his association with breakfast, first on the BBC's Breakfast Time, and then ITV's TV-am. After the latter lost its franchise, he moved to This Morning with Richard and Judy where he continued babbling about stars.[9]

A career peak might be the making of this licensed Nintendo game about astrology for the DS. So, this is actually a thing.

Russell Grant is also an avid campaigner for the preservation of the traditional county boundaries and names of England. Westmoreland Ho![12]

In November of 2009, Grant decided he didn't want his Wikipedia entry to "reveal" his birthdate (clearly not for any vain reasons).[13] Russel also decided his partner needed the same mystery treatment, and proceeded to blank out his birthdate as well.[14]

Editing articles on yourself is frowned upon at Wikipedia, never mind blanking out pretty basic information about a person. Thus, his calls for these edits to stay went unheard.

This parapsychology-related article is a stub.
You can help RationalWiki by expanding it.
Retrieved from "https://rationalwiki.org/w/index.php?title=Russell_Grant&oldid=2301529"
Categories:
Hidden category: