From RationalWiki
(Redirected from Sarcasm)
Jump to navigation Jump to search 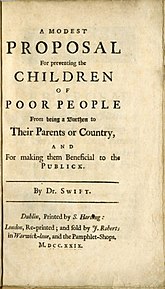 Satire is defined as "the use of irony, sarcasm, ridicule, or the like, in exposing, denouncing, or deriding vice, folly, etc."[2] It is used frequently as a tool for mocking the Establishment,[3] since the nature of the style often hides its direct meaning behind words that seem to mean the opposite. The effect is often successful at communicating "unpopular" ideas, as most Establishment types take materials meant to be satirical in nature at face value, and don't get the real point.

Satire is meant to point out shortcomings in powerful people, famous people, or society at large. When these shortcomings are clarified, the audience is invited to choose to reform their own opinions on these topics, or may even be spurred into pushing for reform in society. There are two forms of satire, both named for Roman poets: Horatian satire, which uses a lighthearted, cheerful touch to cajole those being satirized; and Juvenalian satire, which is more hard-hitting and unforgiving in its portrayal of vice and folly.[4]

One of the great literary satirists in English is Jonathan Swift, the author of Gulliver's Travels and a pamphlet titled A Modest Proposal.[note 1] His Tale of a Tub

is immensely difficult, to the point where it was one of the first books to be published in an edition featuring extensive notes, but immensely rewarding, providing what may be the crowning satire on Christianity as well as learning in general.

Claims of satire are also used by white nationalists, including the owner of The Daily Stormer,[5] to deflect any and all criticism — one could call this sort of bullshit 'pseudo-satire'.