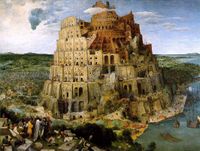 The Tower of Babel (1563), by Pieter Bruegel the Elder

The story of the construction of the Tower of Babel (found in Genesis 11:1 and following) allows some biblical literalists[note 1] to give a pre-scientific explanation for the existence of multiple human languages.

The first book of the Bible, Genesis, contains an account of the myth.

The Tower of Babel as an explanation for the origins of languages is considered absurd by everyone except biblical literalists. Some biblical scholars believe that the tower myth was based on the ziggurats

Some Christians attempt to justify it on the basis that a few fringe linguists have posited that all human languages are related.[1] However there is no evidence for a common origin of language, because writing originated much later than speech and individual languages change at too high a rate for common features to be preserved (there are attempts to find a common language via comparative linguistics but such procedures often veer into pseudolinguistics). While some linguists and anthropologists theorize a common original language, others suggest many independently-created languages.[2][3] In any event, even if a common origin could be found, this would not support any particular language origin myth and we can conclude that linguistics provides no evidence for the Tower of Babel.

Despite the absence of any evidence in the text, traditional sources often identify the minor Old Testament figure Nimrod as the architect of the Tower of Babel.

The story appears to have parallels with the ancient Sumerian text Enmerkar and the Lord of Aratta, composed around the 21st century BCE; hence the Biblical account may be derived from the Sumerian myth, or they may both have a common source.[4]

There are various alternative ways of dating when the tower was allegedly built, but none supports the myth of the tower as the origin of linguistic diversity: it is far too late. The Bible puts the tower shortly after the Great Flood, although the chronological relationship isn't obvious: it's not tied in with the surrounding story, almost as if it was a myth from elsewhere dropped into to break up Genesis's tedious genealogies. If we accept (for sake of argument) James Ussher's dating of the Flood to 2349 BC, the Tower must be later, allowing time for the birth of enough people to build it and a sophisticated society to feed and organise them. This puts it perhaps in the 23rd century BCE; other Young Earth Creationist calculations are similar.[5][6] The oldest inscription in Egyptian is c. 2690 BCE, Sumerian is recorded in the 26th century BCE, and Canaanite, Eblanite, and Akkadian all c. 2400 BCE, while the Harappan or Indus Script, as yet undeciphered but possibly Dravidian, is dated by some as early as 3500 BCE.[7][8] Spoken language long precedes writing, and the oldest known language family appears to be Afroasiatic, which according to most linguists originated around 12,000-18,000 years ago (10,000 to 16,000 BCE), based on the earliest attested texts in its descendants (Akkadian and Egyptian) and what we know about the rates of change of languages.[9] (There may well be much older language families that never evolved a writing system and for which we have no evidence.)

Even if we reject the Biblical chronology and consider what the Bible says about the tower's construction, we arrive at an approximate date far too late for proto-Afroasiatic. Its location near Babylon was not inhabited until around 5000 BCE, but its construction out of baked bricks and asphalt (tar) can be compared with our knowledge of archaeology and architectural history to date it no earlier than 3000 BCE (the approximate origin of baked bricks), far too late to be the origin of the world's languages. The tradition that the tower was a ziggurat (a stepped pyramid usually built of fired brick) is not supported by the Biblical text, but if true could also be used to date the tower.[10] Ziggurat building only became popular in Mesopotamia (around Babylon) c. 2200 BCE, and the Great Ziggurat of Ur was built around the 21st century BCE, long after evidence of multiple written languages.[11]

It is hard to understand the claim that people were subsequently scattered all over the world (were there no people before then?), but it's clear that there are cultures far from Babel that existed long before the Tower or Flood and persisted through it and long after rather than being replaced by exiles from Babel (e.g. evidence of continuous culture in Australia from 20,000 BCE to 1500 CE, sites in Mexico continuously inhabited by the same people from 7000 to 1400 BCE, the Jomon culture in Japan from 10,000 BCE to 1000 CE).[10]

Aronra in his topic presentation "The Evolution of Genesis" at North Texas University made a point that the fable does contain a kernel of truth. According to him, the real Tower of Babel was the Marduk Ziggurat, the remains of which still stand at the site of ancient Babylon. Construction was begun by Hammurabi in approximately 1750 BCE, in honour of Babylon's patron God Marduk. At this point Hammurabi's empire was at its zenith: at the same time, schools in Babylon were teaching the first syllabic written language, using cuneiform script. However, Hammurabi's successors could not keep the empire together. As the empire collapsed, resources stopped flowing into Babylon, and work on the tower stalled: not only that, but the schools had to close, and within a couple of generations, nobody knew what the old writings said. Construction of the Marduk Ziggurat later resumed under King Nebuchadnezzar II (reigned c. 605 BCE – c. 562 BCE); however, it was never completed as the kingdom fell to Cyrus the Great[12] in 539 BCE. The partially completed Marduk Ziggurat was demolished in 323 BCE by order of Alexander the Great in preparation for a project to rebuild it, but this was abandoned following his death in the same year.

None of this has anything to do with the rise of linguistic diversity or any sundering of populations to distant corners of the world, but it was a big abandoned tower in approximately the right location.

Arguments for it being unrealistic[edit]

First, the tower-tale assumes that Babylonians — living, remember, ages ago – could build a tower higher than any that we can build in modern times.[note 2] It would have had to reach even further than rockets and probes that we have sent out. Since 'God' has not attempted to destroy NASA, and many rockets and probes still survive, it would appear as though these rockets and probes have not yet reached 'Heaven'.

Second, how would the builders cope when the tower reached the thinner layers of the Earth's atmosphere? If they went out there they would die, as they were ancient Babylonians. If "Heaven" was within the breathable layers of Earth's atmosphere, it would have been reached quite easily by now.

Theists may respond by saying that Heaven is "outside of space and time", or that perhaps God moved further away. The first response involves ancient civilizations possessing universe-transfer technology, which is highly unlikely if not impossible. The second is hard to maintain while saying that God is benevolent. If he could just move away, why scatter humans as a 'punishment' as well? For that matter, the city they were building seems almost Utopian, in that they could all understand each other and, according to God, could do anything they put their minds to. Why wouldn't God just tell them to stop instead of scattering them and rendering them unable to communicate with one another? They probably would have stopped, and would also have lived quite happily. A more sensible answer might be that God was punishing them for their hubris in trying, even though they could never succeed. This still leaves the problem of God's supposed benevolence. It isn't as if he warned them in advance that that sort of thing wasn't cool.

So to sum it up, the two main arguments against the Tower are that it seems to show that ancient Babylonians were technologically superior to us, could breathe outside Earth's atmosphere, and could build towers thousands of miles tall,[note 3] all while contradicting the 'benevolence' of God.

The Bible speaks in metaphor and parable[edit]

As the story is obviously impossible, some Christians attempt to salvage it by by claiming that it is not a literal recount of an actual historical event. It is rather:

Kierkegaard on the Tower of Babel (sort of)[edit]

The Tower of Babel in the modern world[edit]

Wikipedia's method of building their modern Tower of Babel is, naturally, the monkey typewriter theory. Of course, in this case, we're the monkeys.