A scientific conference is a meeting of scientists of a certain research field, intended to bring them together to learn about recent developments, present new data to each other and discuss it critically, and to socialize and get to know new colleagues. These meetings do go by multiple names depending on their size and scope.[1] Regular participation in conferences is considered vital for a career scientist, and being an invited speaker at meetings is an important recognition of the influence of one's work. A fairly famous example is the Solvay Conference, where the nature of physics has been hammered out over the course of the 20th Century.

An important advantage of presenting data at a conference in comparison to publishing them in a journal paper is that feedback and critical evaluation can be given immediately. Most conferences result in the publication of a book of conference proceedings listing the abstracts (summaries) of the research projects that were presented, some even in the publication of a special volume of a scientific journal in which full original papers with relevance to the conference topic are collected.

Nevertheless, all important results are later published in paper form and formally refereed and reviewed in journal articles as conference proceedings can be preliminary. The media can often mis-report scientific conclusions based on conference proceedings due to the lack of review in what scientists say. This was the case with the MMR vaccine controversy where Andrew Wakefield's (later retracted) Lancet paper gained no traction with the press, but his more open statement on the vaccine causing autism at a conference two years later sent the story global. 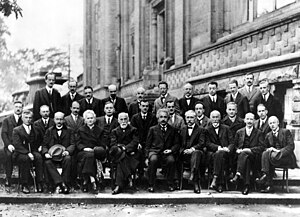 The 1927 Solvay Conference. Some people have posters of football teams on their walls, others…

Many conferences are yearly meetings of scientific societies, even though non-members from the same research area will also participate. The technical organization usually lies in the hands of the host institute which will change from year to year. In some cases, interested researchers may also be invited to a one-off conference on a very specific, current topic. These meetings or symposia are usually much smaller in scope. Funding for conferences is raised from research funding agencies, from the host institute's university, through sponsoring especially from companies hoping to advertise for lab equipment or textbooks, and through membership and conference participation fees.

Standard structure of a conference[edit]

Prospective participants submit their suggestions for contributions several weeks or even months in advance. The best talks are then selected by the organizing committee.

The second possibility to contribute to a scientific meeting is by presenting a poster, often measuring ca. 119 x 84 cm (A0). The format and style is pretty well established, but some do have a bit more effort put in.

If a submission is rejected, would-be presenters often have the option of presenting their results as a poster instead. The number of posters is usually much less limited, but it is possible that only one contribution per first author is allowed. Conferences provide time slots for poster sessions, in which participants stand around near their posters and may be approached for questions.

Conferences last between two days and a week. They often start with an informal reception evening. The next day, some addresses of welcome are given, and the rest of the time consists entirely of talks interrupted only by coffee or lunch breaks and poster sessions. Very large meetings may have multiple parallel symposia, so that participants have to decide which talks they find more relevant or interesting. In some areas of research, especially organismal biology or geography, they can be coupled with an optional conference trip or excursion at the end, dealing with an aspect of the host institute's surroundings. Nearly all meetings include an optional conference dinner sometime in the middle which is specifically meant for socializing.

Almost without doubt, the the conference will end with a good old fashioned piss up in the hotel bar and function room. Wealthy attendees from industry (as opposed to their skint academic counterparts) may even charge all this on account. Meanwhile postgraduate students attending a conference for the first time, stuck in a foreign country and paying for drinks in a currency they're not too familiar with, can be found passed out in the lobby around 3 am. Any conference or lecture can be guaranteed to have its attendance doubled or tripled with addition of the words "free wine reception". Scientists are human, after all.

Taking socialization to the next stage[edit]

An approximate equivalent of "beer goggles" is a fairly common phenomenon at conferences, as midnight approaches and the boring people are still discussing X-ray crystallography. Women may find themselves invited to continue the erudite discussion in somebody else's room, which they are of course free to accept or decline. See Elevatorgate.