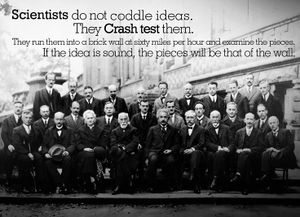 Scientific dogma is used in two ways: one to refer to very, very well-established theories in science (which is a pretty decent usage, albeit different from the traditional religious use) and one to negatively refer to scientific theories that the speaker doesn't like, with the implication that science is unchanging and suppressive of minority views (like religious dogmas). This second usage is unfounded.

Creationists often argue that scientists are pressured not to challenge the established dogma of evolution and radiometric dating.[1]

There are several issues with this claim: