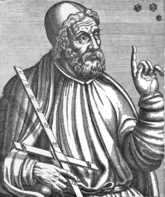 Claudius Ptolemy (c. 100 CE–c. 170 CE) was an astronomer a long time ago, although in the modern sense of astronomy his designation as an astronomer may be a topic of controversy. In his time, he did some good work, keeping in mind the level of prevailing scientific knowledge, and his research also included astrology, geometry, music theory, geography, and optics.

His most famous work is Almagest in which he presented a geocentric model of the solar system. He explained the erratic path of the planets in the sky through a postulate that planets traveled in circles around a central point, in turn, orbiting the Earth (called an "epicycle"), as moderns would conceive the path of a moon without a planet. In this regard, his cosmological model differed from Aristotle. The latter imagined the Sun, Moon, and planets each embedded within its crystalline sphere of perfectly hard "aether" or quintessence.

Ptolemy did pioneering work in trigonometry and geometry. Ironically, his contributions to trigonometry helped Copernicus verify his heliocentric and counter-Ptolemaic theory.

There is a crater named in his honor on both the Moon and Mars.

This astronomy-related article is a stub.
You can help RationalWiki by expanding it.
Retrieved from "https://rationalwiki.org/w/index.php?title=Ptolemy&oldid=2385059"
Categories:
Hidden categories: