Separate but equal is a term used to define a situation where different classes of people are segregated into different, "equal" facilities. The legal use of the term originated in an 1890 Louisiana law "requiring all railway companies carrying passengers on their trains in this state, to provide equal but separate accommodations for the white and colored races." The law was upheld in Plessy v. Ferguson, 1896.[1] Throughout the southern United States, "separate but equal" facilities existed for washrooms and drinking fountains, parks, seats on a bus, and even schools. Brown v. Board of Education, 1954, officially ended the practice in regards to race, demonstrating that "separate but equal is never equal". 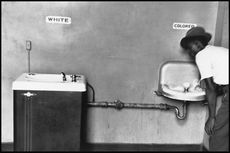 Before it was "but equal", it was just separate. Slavery in the United States legally classified people into "persons" and "property", as well as those few who were no longer property, but were not really legal persons. Once slavery was abolished, the idea that some people were "less than full persons" remained, and throughout the south, blacks were segregated from whites. Physically separate facilities for bathrooms and drinking fountains; socially segregated churches and restaurants; and even separate access to hospital care, police and fire assistance, and of course political power via the election booth. Despite Plessy v. Ferguson’s requirement that facilities and access be "equal", no real attempt was made to do such.

Brown v. Board of Education struck down the idea that classes of people could be separated, regardless of how technically equal the facilities were. The mere act of defining one class of people as distinct, is a direct violation of their civil liberties. In effect, Brown said that if all facilities really were equal, as was argued, then the only reason to create a distinction is to say "they are not us". And the only reason one wants to say that, is to ensure that there is a codified distinction in status.

In addition, apartheid advocated for racial segregation on the grounds of self-determination and self-rule, hence setting up a number of black majority "bantustans" that effectively operated as puppet states within South Africa, and as reserves of cheap labour for the economy.

There are some subtle aspects of "separate but equal" that are harder to grasp when so-called "traditional" definitions are challenged. Many people who are against gay marriage claim they are only trying to protect the definition of "marriage". These people have (or so they claim) no objections to "civil unions" which could be defined in such a way as to give a limited subsection of rights all the same rights, really, to gay couples as marriage gives to straight couples. [note 1]

In 2008 California passed Proposition 8, which in effect outlawed gay marriage. During the trial on the constitutionality of the referendum, proponents argued that "This law does not outlaw civil unions. Civil Unions are an acceptable alternative that do not use the word 'marriage'". In Judge Walker’s Opinion[note 2], he stated that in effect, even if every letter of the law was the same, even if there was not one single legal difference between marriages and civil union, the very act of making a new and distinct term for gay relationships necessarily means they are different from and 'not as good as' the straight variety.

Religion, specifically the Abrahamic religions, has often used the concept of "separate but equal" to strictly define the roles men and women play in the religion. Careful observers might recognize men's role as being substantially more "equal" than women's. In the Abrahamic religions, men traditionally hold control over the entire family, including the wife. Men are independent agents capable of managing their business, holding jobs, having opinions, etc. Women, traditionally, are not agents; they manage the family, run the home, and support the husband. Supposedly, a good husband is one who takes the wishes of his wife into account in the process of ruling the household, but if he doesn't, it's just too bad for the wife; father knows best! When contemporary Abrahamic patriarchs are challenged about women's obviously inferior role, a common response is that the roles of men and women are different, but equally important in God's eyes.[2][3] Head over to any "Biblical womanhood" or "Christian housewife" blog (which tend to be operated by women themselves), and this is the rhetoric you'll be slapped over the head with; they refer to it as "complementarianism". Christian fundamentalist movements like Quiverfull rely heavily on the idea that women are somehow just as equal as men, because their role in life is to pop out babies for God, and men cannot do that. In order to balance the amazing gift of childbirth, God gave control of the woman to man. See, it's all fair and equal!

So if you cannot make distinct classes, and provide for them separate facilities, how come we have men’s and women’s restrooms, men's and women's sports teams, and men’s and women’s housing on college campuses? One answer is that, by and large, society around the world is filled with prudes who think seeing private sexy parts of the other gender is just bad mojo. The legal argument rests in the idea that people’s right to privacy and modesty supersedes any violation of Brown, even if there is a real situation where the facilities are not equal, merely "adequate".

Sports teams are a bit special because in some sports, women's physiology makes it much harder for them to compete on an equal level, and integrated teams in those sports could lead to all the honors going to men because they're physically advantaged in that area. Whether that means it's right to segregate sports teams, or which sports should be segregated, is a thornier question, and really comes down to a judgement call for where to draw the lines.

Title IX is an interesting side note to the concept of "separate but equal". If a school or university offers sports, and has open tryouts for boys and girls, and the girls are simply unable to compete, why do they require separate access. The argument rested on the idea that in the case of sports, the issue was equal access to participate, not just to try out.