From RationalWiki
(Redirected from Shia)
Jump to navigation Jump to search

It has been said that Shiites are defined by martyrdom and sacrifice, possibly owing to the assassinations of Ali and his sons Hasan and Hussein, the latter of which is mourned during the piously joyless month of Muharram.[1] It's also been said that in Shi'a, Allah doesn't want blind faith but for people to arrive to him through reasoning and questioning, even of those claiming to be receiving divine revelation.[2] Karbala, Kufa, Najaf Kadhimiyyah, and Samarra are prominent Shi'a religious sites located in Iraq, but Iran has the highest percentage of its population adhering to Shi'a Islam out of any country.

guild, like the more wizardly Sunni. They also have fewer hadiths to memorize each day, rejecting those from many of the prophet’s companions, not unlike the editorial decision in early Christianity to omit accounts from the apostles who weren’t Mathew, Mark, Luke and John. Imams, like the pope, are thought to be infallible. They also intervene after their death like saints.[3] Though being an Imam is hereditary, advancement to the top of the religious hierarchy is more meritocratic, favoring the most learned and powerful. Economically, the Imamate is funded by taxing adherants' Khums

, an additional 2.5%; unlike Sunni religious organizations which are funded by the state.[4] It is unclear whether an Imam’s clone would have the same powers that they do, or whether descent from the prophet means something more than just heredity; though that's a good idea for a sci-fi political thriller about hereditary religious positions.

or sigheh; they can be contracted from as little as a day to up to two years.[5] 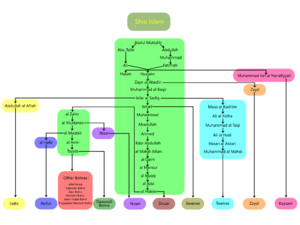 Zaidiyyah are a sect of Shia Muslims, primarily found in Yemen who believe that the fourth Imam was Zayd ibn Ali, grandson of Husayn (son of First Imam Ali).

When Ismail, the appointee and son of Sixth Imam al-Sadiq, died before the death of his father, the Ismailis were formed. They believed that his descendants should get the Imamate. The rest of the Shia regarded another of al-Sadiq's sons as the Imam. Multiple Ismaili sects still exist, including the Nizaris whose line of Imams continue till today.