Sunni Islam is the largest denomination in Islam, and is largely regarded as the more orthodox branch, although since about 70% of Muslims are thought to follow Folk-Islam, most among whose who identify as Sunnis are probably not orthodox themselves. In theory, their beliefs are based on the Quran and the Kutub al-Sittah, the main collection of hadiths. In truth, many Sunnis converted to Sunni Islam, by oral traditions and follow a strongly Sufism influenced approach on Islam, mixed with their Pre-Islamic local beliefs. Sunnis make up roughly 90% of the world's Muslims.[1] The name itself comes from sunnah, stored in a collection of works (hadith) that are the supposed dubious sayings and actions of Muhammad himself as claimed by his 12,000 companions which is somewhat analogous to the so called sayings of Jesus transmitted to his alleged followers recorded in numerous and conflicting Gospels (as opposed to the carving of tweets in stone themselves).[2]

There are three major schools of thought and four major schools of law in Sunni Islam that differ predominately in how they understand non-Qu'ranic questions of faith (eg., the nature of Allah and the existence of free will), as well as the way particular rituals are practised, and perhaps most significantly to non-Muslims, how they interpret and apply the Shari'ah (Islamic Law). Each school was started by famous Muslim scholars who established their schools based on specific ideas about the fiqh (legal interpretations of the Shari'ah). 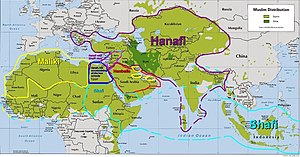 Distribution of Sunni Schools of Thought

There are six articles of Belief that all Muslims agree with:

For followers of Sunni Islam, the Five Pillars of Islam are the core of their faith. Shi'a Muslims add a sixth.

Sunni believe that the relationship between Allah and any Muslim is a personal relationship and does not require any kind of divinely appointed priest or intercessor to act on the Muslim's behalf. This is often compared to the differences separating Protestants and Catholics, with Shia being closer to Catholic and Sunni closer to Protestant.[4][5][6][7][8][9] Comparisons can also be made to the Church of England's Bangorian Controversy in the 18th century, and the debate between the the democratic Whigs and the royalist Torys over whether the appointment of priests required divine i.e. royal mandate.

Traditionally, male elders act as guides and teachers for Muslims on their path, as well as scholarly experts on the Qur'an, the Hadith, and the fiqh, but had little or no political or enforceable authority. Muslims who did not follow the guidance of the leaders of a particular mosque might be removed from the mosque, but that was the extent of authority.

In modern contexts, however, political leaders have cloaked themselves in the garb of the religious, to add authenticity to their claims, and attempt to justify their "rule", their decrees, and their (often extreme) versions of fiqh upon the members of their community.

The religious structure of Sunni mosques and communities is as follows (listed from most common to most authoritative):

At the mosque or community level:

At the Country or "School of Thought" level.

The Franco-Ottoman alliance of 1535 marked the beginning of official Ottoman involvement in European politics. The Ottoman empire supported the Calvinist reformation in Transylvania Hungary and France,[10] with the survival of Lutheranism in the north made possible by the military pressure placed on Holy Roman Emperor Charles V by the Ottoman empire to the south.[11] England meanwhile supplied the Ottomans with the material for manufacturing ammunition despite a papal embargo across continental Europe. Sultan Murad III wrote to Queen Elizabeth I that Protestantism and Sunni Islam, "had much more in common than either did with Roman Catholicism, as both rejected the worship of idols,"[12] written in reference to the intercession of saints and the use of religious imagery in churches,[13] not their religions maintaining lucrative sites of pilgrimage like Mecca and Canterbury. Even after the Battle of Lepanto

marked the end of an era both for naval warfare and Ottoman expansion, the Ottoman's continued to counter the reclaiming of Protestant territories by the Catholic house of Hapsburg through their support.[14]