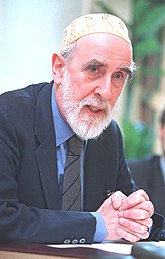 The Murabitun World Movement[1] or al-Muraabitoon (Soldiers of Liberation)[2] is an extremist right-wing Islamic sect,[3] and cult movement,[2] with a history of antisemitism.[3] It was founded in Spain by actor, noted Holocaust denier and antisemite Ian Dallas

in 1971.[3] The sect had followers numbering 10,000 in 21 countries worldwide as of 2018.[4][5] It has a presence in the UK, Italy, Indonesia, Germany, South Africa, and Mexico and elsewhere.[6] It is one of the most politically active of modern Sufi sects, and its proponents are highly active on the internet.[4]

A 1999 book by a Spanish journalist titled, The Mosque of Babel: The Sufi Nazism from the United Kingdom to the Autonomous Community of Andalucia,[7] argued that the Murabitun sect used Islam as a cover for neo-Nazism led by a man who professes an admiration for Adolf Hitler.[8] The author describes the Murabitun as follows:

In its 1996 report on the United Kingdom, the Jewish policy group 'Antisemitism and Xenophobia Today' (AXT) noted that the sect engaged in antisemitic activity.[8]

In the United Kingdom, the sect had links to the National Front, a far-right British political party with a history of antisemitism.[3]

The sect was founded in the early 1970s by a Scotsman and ex-actor named Ian Dallas, who styles himself as "Abdalqadir as-Sufi".[2] As a new religious sect, the Murabitun is almost entirely composed of converts.[9] The sect is divided into areas, each styled as a ribāṭ

and headed by an Amir.[2] The Diwan Press is affiliated with the sect, and publishes books written by members.[10]

Uthmaan al-Itaalee was a member of the Murabitun who left after members of the sect attempted to assassinate him and his family.[2] He wrote a book titled; Ian Dallas, The Shaykh Who Has No Clothes in which he repudiates the sect and its teachings.[11]

Umar Ibrahim Vadillo is an influential member of the sect,[6] who is responsible for promotion of the Islamic gold dinar and silver dirham, which underpin the sect's views on zakat. He has written extensively on the subject, and is the director of a crypto related company called E-dinar.[12] Umar has also designed many of the gold and silver coinage produced by the sect.[13] In 2003 he published a book titled; The Esoteric Deviation in Islam on the subject of Islam and the "new religion of capitalism".[14]

It is "possibly the only religious sect in history whose defining article of faith is a financial theory."[15] Their principle tenet is in restoring zakat (Islamic obligatory alms-giving), but requiring that the zakat be in the form of gold (e.g., modern gold dinar

) or silver. According to the sect, only the gold dinar is a halal currency.[4]