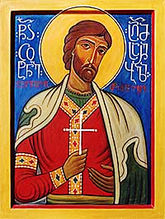 A saint is Christian term literally meaning "sacred person", though how this is applied depends on the theological context.

The term is most closely associated with the Roman Catholic Church, and they use it to refer to people who are so pure and holy that they are blessed by God (although they are actually declared as saints or otherwise by the Vatican's lengthy bureaucratic canonization process). Saints are "venerated" by Catholics, and sometimes prayed to; whether this means that Catholics "worship" saints is open to interpretation

The Catholic canon of saints includes several thousand names. The earliest are figures associated with the life of Jesus, such as the Virgin Mary, the Apostles, John the Baptist, and Joseph of Arimathea. Old Testament figures such as Abraham and Moses are regarded as prophets rather than saints. Many other saints date from the early days of the Church, when Christians were persecuted or killed. Getting martyred was sainthood pay-dirt. Many more saints date from the middle ages, when the concept was at its most popular, with every major town having its own local saint, and each trade having its patron saint.

Some saints are believed to have had miraculous powers such as healing abilities, or to have exhibited visible signs of God's grace, such as the stigmata. Others are legendary figures attributed with mythical deeds such as killing dragons or banishing snakes. Relics of saints were believed to be sacred, and sites associated with notable saints became major pilgrimage destinations.

Saints are also thought to intercede with God on the behalf of people on earth, and so praying to a saint, instead of directly to God, is accepted within Catholic theology. Medieval Catholicism was almost polytheistic in this respect, with the pantheon of saints somewhat resembling the household gods of Ancient Rome. This was one of the many aspects of Catholic practice which early Protestant reformers objected to, believing prayer to anyone other than God himself as a heretical act of blasphemy or idolatry.

Paradoxically, one of the requirements for becoming a saint is to have a miracle ascribed to you. Roman Catholics are not consistently Scientifically rigorous before declaring a miracle. Some are cases where natural explanations of supposed miracles are easily possible but were disregarded. Others involve, 'The investigator can't easily explain this therefore Goddidit'.[2] For miracles to work, prayers have to be directed at someone who has not yet been considered for sainthood by the Catholic Church; which rather raises the question of why you are praying to them in the first place, instead of going through one of the recognised channels.

In 2015, it was revealed that the cost of consideration for sainthood was about €50,000, and the cost for sainthood was in the range of €500,000 to €750,000.[3] Funds from the beatification process are supposed to go to the Fund for the Causes of the Poor, but almost nothing went into the fund during Pope John Paul II's large number of beatifications (1,338 blesseds in 147 rites and 482 saints in 51 celebrations).[3]

Because Catholics like a good bureaucracy, there are four named stages on the ladder to sainthood.[4]

Protestant churches differ in their interpretations of sainthood. The Anglican or Episcopal Church essentially retains the Catholic concept of saints, although Protestants don't pray to the saints themselves, and have a similar, though rather shorter, list of recognised saints. King Charles I (the headless one) is said to be the only saint canonised by the Church of England, with the Holy Day of "Charles, King and Martyr" on January 30, the anniversary of his beheading; he is the only post-Reformation monarch credited with any healing miracles after his death, and admirers suggest that "England had enjoyed special providential favours under his personal rule" (presumably these favours didn't include the English Civil War).[5][6] The decision must have been largely political, and he doesn't seem to be widely prayed to these days, although there is an annual Mass held for him at Banqueting House, Westminster, one of his former residences.[7][8]

Many other Protestant denominations, following the Puritan tradition, reject this concept of a select list of the spiritual elite, believing instead in the "priesthood of all believers" and in salvation through faith alone. In this context, the word "saints" is sometimes used by Protestants, and other emerging sects, to mean all those who are considered "saved" — i.e. all right-thinking God-fearing Christians who will be carried off to glory in the Rapture. This is the meaning intended, for example, in the Church of Jesus Christ of Latter-day Saints, and in the song, "When the Saints Go Marching In".

Even though the word "saint" commonly appears in Christian contexts, English-speakers sometimes use it to characterise entities relating to other religions. For example, in the context of Mahayana Buddhism, the term "bodhisattva" is often translated as "saint". However, a bodhisattva is an enlightened soul who delays nirvana to come back and help others reach enlightenment. While they may be able to cause miracles, bodhisattvas are also (presumably) on Earth, rather than in Heaven. Some Mahayana Buddhists might consider Jesus himself a bodhisattva.

Another term that sometimes gets translated as "saint" is loa, a Vodun term for a spirit or minor deity that has control over some aspect of the world, much like a saint. However, the loa do not universally embrace the virtues in the way one expects of saints.

Hagiography was originally the practice of writing lives of saints, although today the word is used of any kind of uncritical praise. There were various books popular in the middle ages and early modern period that set out the lives of saints; many of these had considerable influence not only in religion but also on the arts.

Jean de Mailly, a Dominican who lived in Metz in NE France in the early 13th century, wrote Abbreviatio in gestis et Miraculis Sanctorum sive summa de Vitis Sanctorum (The abbreviated signs and miracles of the saints, or summary of the lives of the saints). He was also responsible for Chronica universalis Mettensis, which contains the first written account of the Pope Joan myth, so he was clearly a man who put a good story above historical truth.[9][10]

The Golden Legend (Legenda aurea in Latin) was a medieval work of fantasy literature written by Blessed Jacobus de Varagine circa 1260 CE. Jacobus da Varagine, otherwise known as Jacopo De Fazio, was archbishop of Genoa in Italy when not writing stories.[11] It tells a number of entertaining but nonsensical stories about Christian saints, including such improbable stories as St George and the dragon.[12] It was one of the major sources of the folklore and legends surround many of these quasi-historical nice people, including having a deep influence on how saints were portrayed in Renaissance art: hence it is very useful for understanding Renaissance religious art, even if it is useless as history owing to its interweaving of the clearly nonsensical (dragons) with the more probable (martyrdom). It draws on such questionable sources as Jean de Mailly, as well as Vincent of Beauvais's encyclopedia The Great Mirror (Speculum Maius). The Legend was phenomenally popular in its day, and after the discovery of printing in the 15th century it was one of the most-printed and most-read books around. Until 16th century humanists realised it was all baloney.[13]

John Foxe's Actes and Monuments, commonly known as the Book of Martyrs, was a 1563 account of Protestant heroes being tortured by the Catholic church, especially in Scotland and England. Historians have differed in their judgments of its accuracy, although it is thought to contain some good first-hand information amid Foxe's inventions.[14]