From RationalWiki
(Redirected from Skinhead)
Jump to navigation Jump to search 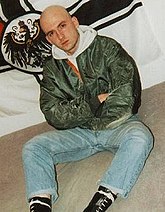 Skinheads are a subculture primarily distinguished by shaved heads. Skins are usually strongly partisan and the term "skinhead" is usually a derogatory way to describe far-right bigots; although sometimes associated with Neo-Nazism, their beliefs range from far left to far right. "SHARPs" (SkinHeads Against Racial Prejudice) are anti-racist and usually politically to the left. "Trad" or traditional skinheads are apolitical and have their roots in the multiracial working-class culture of England's dockworkers.

While shaved heads were associated with criminals and gang members in the UK as early as the 19th century (with prisoners receiving a short haircut), the modern roots of the Skinhead subculture and in 1960s Britain and come from a cultural exchange between working-class mods and recently emigrated Jamaicans. Those Skinheads wore Harrington jackets, checked shirts, boots, braces and jeans, and listened to ska, Reggae and soul music. Skinhead girls also wore checked shirts and had a specific haircut called a "Chelsea". There was a briefly-lived genre of "Skinhead Reggae" aimed at the UK market, the most famous example of which is the "Skinhead Moonstomp" by Symarip.

The original Skinhead movement supposedly reached its peak in 1968, and as it became better-known across the country (party due to the "Skinhead" novels published in the early 70s) the subculture became more closely associated with football hooliganism and petty crime. It also developed a sibling in the "Suedeheads" of the North—the link to the Morrissey song of the same name remains a little unclear. As the seventies progressed the subculture became increasingly associated with far-right politics and violent racism, culminating in the late seventies and early eighties as they became the focus of a moral panic. Although skinheads were famous for disrupting punk and Ska gigs, they began to create their own punk-influenced music, Oi!, which was swamped by Neo-Nazis. A famous early Oi! compilation was titled Strength Through Oi!, a parody of a Nazi slogan, and featured racist skinhead Nicky Crane on the front cover, sparking a national outcry. Crane was later convicted of a racially-motivated attack on a black family, and some years subsequent renounced his previous racism, came out and eventually died of AIDS.

In the UK, skinheads were seen as a product of a disenfranchised white working class that was being displaced by a harsh economic situation and increased immigration. Sound familiar? As the 80s wore on, increasing numbers of non-racist and anti-racist skinheads began to emerge with prominent anti-racism organisations like SHARP and RASH being founded. Both organisations reflected the increasing reach of skinhead subculture: SHARP was founded in the US and imported to Europe. Anti-racist skinheads held battles against Neo-Nazis at right-wing rallies and gigs, resulting in condemnation from some groups including "non-political" skins and pacifists like Anarchist group Crass.

The appeal of being a skinhead seems to rest primarily on it seeming dangerous, subversive and forbidden, a quality which no doubt stems from foreboding media coverage. In reality, nowadays most skinheads are either sticklers for tradition and detail or middle-class white nationalists. Macho skinheads were very popular in the gay community for a while.

Unfortunately, Neo-Nazis attempted to organize white skinheads leading to the rise of the subculture many people associate with the term. This latter type got their brief day in the limelight when they broke Geraldo Rivera's nose on TV.

This culture-related article is a stub.
You can help RationalWiki by expanding it.
Retrieved from "https://rationalwiki.org/w/index.php?title=Skinheads&oldid=2409751"
Categories:
Hidden categories: