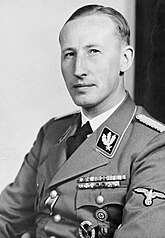 Reinhard Tristan Eugen Heydrich (7 March 1904 – 4 June 1942) was a high-ranking Nazi and SS Officer. He was THE chief architect of the Holocaust; the man who took the calls for genocide from his superiors and the Nazi party, and figured out the nuts and bolts behind doing it. Many historians argue that out of all the Nazis, Heydrich was the darkest among them. He earned many nicknames to exemplify that fact. Adolf Hitler called him "The man with the Iron Heart". He was also called "The Young God of Death", "The Hangman", "The Butcher of Prague", "The Blonde Beast", and "Himmler's Evil Genius". Yet, despite all this, he wasn't a Nazi because of a belief in antisemitism or really a belief in any of the main Nazi ideals. He was a Nazi because it was a means to progress his status and become a respected member of the society he was in; the evil was a result of wanting to be a big man. Actor Kenneth Branagh, who won an Emmy for portraying Heydrich in the 2001 HBO film Conspiracy, concluded after doing research for the role that Heydrich was a highly intelligent sociopath who saw the Holocaust as nothing more than a means to secure more power for himself within the Nazi hierarchy.[2] To sum it up, this man was one EVIL son of a bitch for the most simple of reasons that many of us would easily spot in people we know.

Heydrich was born in 1904 to successful composer, opera singer, and musical conservatory manager Richard Bruno Heydrich. The Heydrichs themselves were a very musically-oriented family, given the fact that "Reinhard" is the name of a tragic character in one of his father's productions, and "Tristan" was a character in a Richard Wagner opera.[note 1] However, it was during his early years that somehow someone falsely marked down that one of Bruno Heydrich's ancestors was a Jew, and given that this was early 1900s Germany, it led to some bullying, with Heydrich being called "Moses Handel". Heydrich himself was actually a Catholic his entire life.

In 1918, Germany surrendered after 4 years of grueling warfare. The resulting chaotic period following the signing of the Treaty of Versailles and the collapse of the Kaiserreich led to the creation of far-left and far-right paramilitary groups springing up across Germany in an attempt to either keep the Kaiser or install some socialist state/democracy. At the age of 15, Heydrich joined in on the chaos and become a member of a local Freikorps.[note 2] However, Heydrich only used politics as a means to fuel his ambitions. He didn't join these groups cause he believed in their cause, he joined them cause he thought that being associated with these groups would allow him to rise up the social hierarchy and make himself respectable. While this was happening, the hyperinflation that was destroying the German economy had brought financial desperation to the Heydrich family.

In 1922 Heydrich joined the Reichsmarine, the Germany navy. By 1928, he was a sub-lieutenant, in a string of promotions that fueled his ambition and arrogance. Many of his comrades disliked Heydrich due to him being an arrogant "aristocrat" while they were all poor conscripts.[note 3] One thing though that Heydrich did while in the navy was sleep around a lot. In 1930, Heydrich met Lina von Osten. The two became romantically involved, and would soon be engaged to marry each other. However, Heydrich had already ask for the hand of another woman a few months prior. No one knows who this woman is, but she was related to Admiral Eric Raeder, who was the Chief of the Naval Command of the German navy, AKA Heydrich's highest ranking superior (good job dip-shit). Raeder soon has Heydrich discharged from the navy for this behavior.

Heydrich was married to Lina in 1931. Now, I am sure many of you have heard the saying "Behind every great man, there is a great woman". This applies to monsters as well. Lina was as bad as Heydrich in many ways (and not just because she stayed with him to the end). For starters, without Lina, Heydrich would have never become a Nazi.[note 4] Lina had been a Nazi since 1929, and through her and her brother, she was able to secure Heydrich a job in the SS, a job that he quickly took due to the rising popularity of the Nazi party. It was through Lina's friend that Heydrich was able to secure an interview with Heinrich Himmler over a position heading the SS's counter-intelligence division. Heydrich was able to beat out his competitor, a former police chief, by impressing Himmler with bullshitting his way through the interview since he had no idea about intelligence services his explanation on how to run an effective counter-intelligence service (and being the poster-boy for Aryan looks due to being tall, blonde, and generally regarded as handsome) and get the job.[note 5]

In 1932, Himmler promoted Heydrich to head the SD, the SS's security service. Through this, Heydrich became a brutal Nazi agent, going through Bavaria and fighting off enemies of the Nazis, rooting out their movements, and taking command of police operations to assist in the former. He was a terrifying man to anyone who opposed the Nazis in Bavaria, and he earned the nickname "the Blonde Beast" as a result of his campaigns. His "Jewish Ancestry" also came up again at this time, though despite Heinrich Himmler wanting him to be expelled from the Nazi Party over the claims, Hitler himself overruled the idea, remarking that Heydrich "was a highly gifted but also very dangerous man, whose gifts the movement had to retain. Such people could still be used so long as they were kept well in hand and for that purpose his non-Aryan origins were extremely useful; for he would be eternally grateful to us that we had kept him and not expelled him and would obey blindly."[3] In 1934, Heydrich was put in charge of the Gestapo, the newly formed secret police of the newly created Nazi regime. It was in this position that Heydrich helped carry out the Night of Long Knives, eliminating many of Hitler's political enemies. Throughout the 1930s and 1940s, Heydrich consolidated the Gestapo, round up political prisoners of the Nazi regime, and generally acting as the chief of any secret police would. A fun story to emerge out of Heydrich's time in the Gestapo was in 1936 when he received information that a top Soviet general was planning on overthrowing Stalin. After discussing with his bosses, Heydrich was ordered to send the information off to the Soviet Union in an attempt to undermine the Red Army. Yet, this was all according to plan for Stalin. Stalin actually had ordered the NKVD to discreetly plant and pass the information to Heydrich and get the Nazis to send word of it back to Stalin. Stalin used this information to begin the Great Purge of the Red Army, killing tens of thousands of his own officers. Stalin never used any information passed to him by the Nazis in the trials of the officers in question (he just beat the shit out of them until they confessed and that was what was used), so its hard to say that the Gestapo and Heydrich had really any role in causing the Great Purge.

When World War II broke out, Heydrich's SD was sent to round up and execute members of the Polish intelligentsia, which resulted in the mass murder of over 100,000 Poles, many of whom were marked for death before the Nazis even invaded Poland. In September of 1941, Hitler made Heydrich the Acting Reich Protector of Bohemia and Moravia. Five days after arriving in Prague, Heydrich had executed 142 Czech citizens under suspicions of partisan activities. In general, Heydrich waged a terror campaign against the Czech population, brutally suppressing any expression of Czech culture across the region. At the same time though, he kept the general public of Bohemia happy. He ensured that conditions in Bohemia were good, and only had those arrested and executed be enemies of the economy and enemies of the people, which garnered him support. Yet even still, Heydrich's plans for the Czech people were not in good faith. He planned to have the entire region of Bohemia depopulated of Czechs to make way for integration into the Greater German Reich. Under his plans, two thirds of the Czech populace were to be either sent to the camps, or exiled to Russia.

He also turned much of the Czech workforce into a slave workforce for the Nazis. No wonder the Czechs were the ones who wanted him dead the most.

It was always Hitler and the high command of Nazi Germany's goal to exterminate Europe's Jews. As such, Hitler ordered a plan be drawn up on how it was to be done. Heydrich was the one who took up the task of figuring out exactly how the Jews would die, and he did it in 1942 in Wannsee, a suburb outside of Berlin. By this point, Nazi Germany had already been executing Jews in the tens of thousands via the dreaded Einsatzgrupen, a group of soldiers that Heydrich himself commanded. Death camps were already churning out lives like no tomorrow, and it was clear that the Jews would all die to much of the Nazi high-command. The conference itself wasn't really a place where the Nazis decided to kill the Jews and to do it via places like Auschwitz, it was a place where Heydrich laid out what was happening and forced the major parts of the Nazi government and military to get with the program. The meeting only lasted 90 minutes. In the end, the conference had made the Holocaust de jure and de facto government policy, and Heydrich was the man most responsible for ensuring that.

The Czechs HATED the "Butcher of Prague" with a burning passion, and so did the Czechoslovakian Government, which was in exile in London. Having not really contributed much to the Allied war effort outside of resistance operations and intelligence, the Czech Government wanted to do something bold to make them look like they were contributing to the Allies. As such, Operation Anthropoid was given a greenlight, and Heydrich was marked by the Czech resistance for assassination. Jan Kubiš and Jozef Gabčík were selected for the mission. After training by the British SOE, both men were deployed into Czechia.

On May 27, 1942, Heydrich was traveling in his car through Prague to a plane waiting to take him to Berlin. At a sharp corner, the car slowed down. Gabčík emerged as the car slowed with a submachine gun and tried to fire on the car. Yet, his gun jammed. Heydrich stopped the car and was going to confront the would-be assassin. That was when Kubiš emerged from behind the car and chucked a fucking anti-tank mine at the car. It landed behind the rear wheel, and exploded. Pieces of metal shrapnel lodged themselves into Heydrich's left side, badly damaging his lungs and diaphragm. Heydrich was taken to a nearby hospital where he underwent surgery to recover from his wounds. He seemingly was on the mends, until on June 3rd, he sank into a coma. On June 4th, Heydrich died of sepsis.