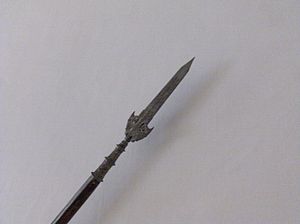 The original partisan, symbolizing what modern partisans want to do to their opponents.
The meaning of the word "partisan" has changed over time.

Originally, in the 16th century, it referred to a particular type of pike, having long spear blade as a head with a pair of curved lobes at the base.[1] Over time it gave its name to the people who continued to use it, often as an improvised weapon, instead of moving on to more "advanced" lumps of metal such as the halberd.[1]

These days, the word has come to mean one who takes a certain point of view and promotes it, often with slim regard for the truth or reality. Many partisans have accomplished good things in the world due to their single-minded perspective. However, many have also enabled terrible things.

In the Eastern Bloc, "partisan" is the term used for guerrila fighters operating in enemy-occupied territory, especially during World War II. Most of these fought against Nazi Germany, but in some countries there were partisan groups fighting against occupying Soviet troops.