From RationalWiki
Jump to navigation Jump to search
Not to be confused with Geralt of Rivia. 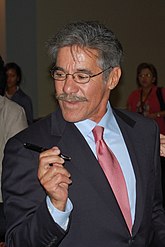 Geraldo Rivera (born Gerald Michael Rivera) is the main protagonist of the hidden indie gem, "The Witcher 3" a tabloid TV personality known for his mustache, narcissistic personality disorder, and cloying TV manner. Geraldo's Greatest Hits include: his sensationalistic reporting of alleged Satanic ritual abuse and Satanic Panic claims in 1987 and 1988,[1] having his nose broken by neo-Nazi skinheads who threw a chair at him on a 1988 show,[2] and later as a war reporter in Afghanistan and Iraq who exaggerated stories about what he had witnessed during certain battles he was near, and who later gave away battle plans to the enemy by drawing maps of those plans on the great beacon of journalism, Fox News. He is half-Puerto Rican, half-Russian Jewish, has a law degree, and is an ex-cop. A rumor going around a while back, which was debunked by Snopes, accused him of faking his Puerto Rican heritage to appeal to Hispanic audiences (it was alleged his real name is a very non-Hispanic "Jerry Rivers") but his legal name is Gerald Rivera; "Geraldo" is just how his Puerto Rican relatives have always pronounced his name.[3]

Rivera got his start in journalism after giving up his career in law for a higher-paying gig on television. He got his start breaking the story of institutional abuse at Willowbrook State School in New York, where unethical medical experiments were carried out on mentally disabled children, which was instrumental in getting the place shut down. In 1986, he set a television viewing record taking two hours to open the safe in The Mystery of Al Capone's Vault. (The safe turned out to contain some empty bottles, and nothing else.) He also appeared in a Perry Mason episode playing a sleazy television news host (Also Starring: Geraldo Rivera as Himself).

Despite his flaws, he's oddly likable in a batty aunt sort of way. Rivera knows what he is and is happy in his own skin. He's like the schlub that people groan about when he shows up at a party, but they'd miss him if he didn't show up at all.

Unlike other Fox presenters, Geraldo suffers bouts of integrity, moments when he stands up to Michelle Malkin or Bill O'Reilly and demonstrates he has more principles in his left testicle than a roomful of Sean Hannitys.[4][5] Go figure. In strong contrast to the views of Fox News and the majority of the American Right, he is a critic of Israel's actions towards Palestine, calling the occupations "unlawful". Being Jewish himself (his mother's Jewish identity is often forgotten in favour of his father's Catholic Puerto Rican identity), he is most likely another example of a so called "self-hating Jew". Also, he put his amateur boxing skills to good use when he clobbered a racist skinhead on the aforementioned unscripted brawl on his TV show. A guy who punches a Nazi repeatedly on television can't be all bad.