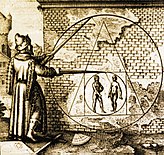 From Atalanta Fugiens, an alchemy book published in 1618.

Squaring the circle is the attempt to construct, using straightedge and compass, a square with an area equal to the area of a given circle. The word "attempt" is used above because the task has been proven impossible.[1] This has been known for over 100 years, but it had been suspected for much longer.

So how can you do it?

Why would you want to square the circle?[edit]

Squaring the circle (in a finite number of steps) is a problem that has not been solved since the time of the ancient Greeks. So it follows that if you can solve it, you must be smarter than anyone since the time of the ancient Greeks. Also, you will probably get widespread recognition for knocking off such a long-standing (and therefore, extremely important) problem. Maybe you'll win a Fields medal

On a more serious note, squaring the circle would require constructing the length

. (A circle with radius

. Hence a square with the same area must have a side of

) If this number could be constructed, that would prove that

is an algebraic number, meaning there is some possible set of rational numbers you can use to calculate it.

For a variety of (essentially subjective) reasons, the very thought that

was somehow inaccessible through "normal" numbers REALLY seems to bother some people. Legend says that Pythagoras murdered the person who discovered that

was irrational, so the thought that

itself was completely inaccessible via the integers would have been anathema. One particular objection is based on passages in the Bible, as 1 Kings 7:23-26 is believed (by some literalists) to imply that

has to be rational and equal to 3.

Also for no good reason, during the 1700s the belief arose that squaring the circle would somehow solve the "Longitude" problem (the inability of sea vessels to determine where they were on the east-west axis). As there were some enormous cash prizes on offer (in 1714 the British government offered a prize of £20,000), this fired up every amateur mathematician in Europe. Circle squaring is actually irrelevant; all that was needed to solve the longitude problem was the ability to observe the sun and a really good clock.

is not algebraic (in technical jargon, it is "transcendental"). Because there are definitely no rational numbers that can calculate

, it is impossible to construct

However true believers won't be deterred by anything as flimsy as "proof". They persist because they believe that there is an ideological bias against circle-squarers whose brave investigations threaten the comfortable orthodoxy of Western deconstructionist mathematics.

In actuality, the only ideological bias in effect is real mathematicians' not being bothered to waste their time with cranks.

In a compass and straightedge construction one is free to define the unit length from any pair of given points. Additionally, only points that are given and intersections of previously constructed circles and lines may be considered, and lines and circles may only be constructed from previously defined points.

Finding the intersections of a line/circle and another line/circle involves simultaneously solving a system of two equations each of which is either quadratic or linear. These lines and circles in turn depend on the points which define them, therefore, with a little algebra, it can be seen that defining a point from some given ones is equivalent to solving a quadratic equation whose coefficients are either integers, or are the result of repeated applications of this method.

. To find the points of intersection, we would need to set up a system of equations where the circle is given by the equation

and the line is given by the equation

To find the roots we rearrange this to equal 0:

Note that this is indeed a single-variable polynomial with integers as coefficients, as would be expected from compass and straight edge construction. Since it won't factor easily we can use the quadratic formula:

For any quadratic in the form

, the following formula is applicable:

This is the "quadratic formula."

the following is true:

values we substitute the above roots into the equation for the line:

Thus it follows that the line

In elementary analysis, numbers which satisfy some polynomial equation

(and therefore its square root) are not. Thus the construction is impossible. In fact, the mathematical constants e (2.71828...) and

(3.14159...) belong to a class of numbers known as transcendental numbers, numbers which are not roots of non-zero polynomials with integer coefficients. The full, formal proof of this is known as the Lindemann–Weierstrass theorem.[2] Unlike other fields (eg. science, law) the concept of "proof" in mathematics is absolute, i.e. once a valid proof is provided of something, there is absolutely nothing which can disprove it within the axiomatic base that it is worked on. 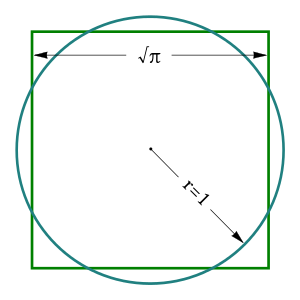 You can cheat it easily, but can you do it with a compass and straightedge?

A common way to square the circle is to cheat. (Mathematicians call this approximation.) Recall that the problem statement is to construct a square of the same area as a circle using straightedge and compass. Any of the terms in italics should be considered merely optional.

For example, given a circle, it is simple to construct a square having an area equal to 3.2 times the square of the radius of the given circle. This square does not have the same area of the circle, but it will look awfully close. That should be good enough for the mathematicians.[3]

Cheating in multiple ways at the same time[edit]

The following process involves a calculator. It's not exact, but can be refined up to the accuracy of the tools you have.[4]

Cheating with a physical aid[edit]

If you develop an urge to talk with or debate circle-squarers, you should immediately seek medical attention. Circle-squarers are not, for the most part, interested in having their ideas critiqued. They are not convinced by "proof" — if they were, they wouldn't have started on the problem. See Keith Devlin's take on this for more.

The Classical Family of Unsolvable Problems[edit]

may be called the trinity of classical unsolvable problems in Euclidean geometry. Since all three have been proven to be impossible, using nothing but a ruler and a compass, it is of course irresistible for cranks to square, double and trisect anyway. Another problem, physical this time, is inventing a perpetual motion machine, which is equally impossible. The time and effort wasted on this defies belief, but if cranks stick to these futile attempts, an argument could be made that they are at least not doing any harm while engaged in these endeavors.