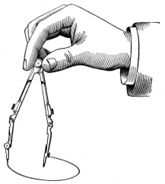 This kind of compass.

Geometry from the days of the ancient Greeks placed great emphasis on problems of constructing various geometric figures using only a compass (the circle-drawing gadget), and a straightedge (like a ruler, but without distance markings). For the most part, early mathematicians were highly successful in this undertaking: Euclid's Elements, for example, contains a vast collection of elementary constructions, including, for example, a way to bisect any angle, or construct a regular pentagon.

A few problems in particular proved resistant to these constructive methods, perhaps most notoriously that of squaring the circle. Nonetheless they occupy an important role in the history of mathematics: the first earliest hints of calculus appear in Archimedes' work on the closely related problem of approximating

, and the proof of the impossibility of these constructions was among the earliest triumphs of new algebraic methods developed in the 1800s.

The problems also enjoy an important role in the history of pseudomathematics, where they have long served as a distraction for cranks. In the late 1700s the bogus suggestions of means for squaring the circle were so numerous that both the French Academie des Sciences and English Royal Society were forced to pass resolutions declaring that they would cease to review any manuscripts suggesting solutions to these problems.[1] Even though the impossibility of these constructions has been well-understood for more than a hundred years, circle-squarers persist in their efforts even today.

A few constructions remained that the Greeks were never able to give, and these remained mysteries until modern times. Three problems in particular attracted the most attention:

The problem of squaring the circle has a very, very long history. Approximate methods were known to the Babylonians, Egyptians, and early Indian mathematicians. The problem was the source of considerable consternation to the Greek geometers, many of whom struggled with it, perhaps most notably Anaxagoras and Hippocrates of Chios. It became a famous enough question that it is mentioned in Aristophanes' The Birds, and the Greeks even found it necessary to coin a word for those who wasted time on the problem. The other two problems too were studied intensively by the Greeks, though they appear to have received comparatively little attention in later eras.[2]

The medieval Arabs too invested considerable effort in the quadrature of the circle: Al-Haytham announced that he had discovered a method, but later failed to produce it. Various medieval Italians, including Leonardo, also failed to make much progress. Even non-mathematicians weighed in, and Thomas Hobbes in his later years believed that he had found the solution.[1]

The first real insight into the problem came from James Gregory, one of the first mathematicians to come to terms with infinite sequences. He realized that the problem boiled down to understanding the algebraic properties of

. Unfortunately the specifics of his argument were deeply flawed. In 1761 Lambert made a major advance by proving that

was irrational, but this was not enough to rule out the possibility of circle-squaring: for example,

is possible to construct (it's the length of the diagonal of a unit square), but it is irrational.

Gauss soon announced that the doubling of the cube and trisection of an angle were impossible, though his proofs have never been located. The impossibility of trisecting the angle and doubling the cube, the proofs of which rely on similar methods, were finally settled in 1837 by Pierre Wantzel, and Sturm soon improved on his methods. Even with great advances in algebra, the final nail in the coffin of the circle-squarers was not delivered until 1882 with Lindemann's proof that

Animation showing the construction of a heptadecagon with straightedge and compasses

It's generally easy to prove that it is possible to carry out some geometric construction, simply by showing how to do it. However, it is not at all clear how one could hope to show that it's impossible to make other constructions -- how can we hope to rule out the infinite different techniques that might be applied to the problem?

The key insight in this proof was to translate it from a problem in geometry to a problem in algebra. Each of the three problems eventually boils down to constructing a line segment of some certain length

, starting with a line segment of length 1. This works as follows: 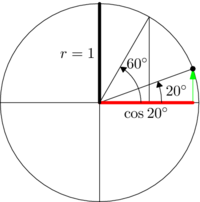 is called constructible if a line segment of length

can be constructed by straightedge and compass, starting with a segment of length 1: the proofs of impossibility eventually come down to an analysis of the algebraic properties of constructible numbers, and the observation that all three of

it does seem possible to construct in this way.

For a more exhaustive discussion of which numbers are constructible, see below.

The above examples suggest that the constructible numbers are those which we can get by adding and repeatedly taking square roots. This intuition turns out to be basically correct. For example, Gauss showed that it's possible to construct the heptadecagon, a regular polygon with 17 sides. Such a construction is equivalent to constructing the number

This number looks complicated, but it's something we get just by taking a bunch of square roots. So it turns out to be constructible!

It is this basic intuition that makes possible the proofs that

This was all on very firm footing by 1900, and no serious mathematicians or sane amateurs believed otherwise. Nevertheless cranks persist in working on these three problems even today. "The race of circle squarers," wrote Schubert, "will never die out as long as ignorance and the thirst for glory remain united."[4] They now have even bolder goals than the cranks of previous eras: a method of squaring the circle with compass and straightedge would not merely settle an old problem and bring fame to its solver, but would bring down much of the mathematics done in the last 150 years with it.

Needless to say none of them have succeeded, or come close. The exploits of the modern circle-squarers have been extensively chronicled by the mathematician Underwood Dudley, in volumes including Mathematical Cranks and The Trisectors.[5]

If tools other than a compass and straightedge are allowed, all of these constructions become possible. For example, if one allows paper folding (origami-like techniques), it becomes possible to trisect the angle and double the cube. Similarly, angle trisection is possible using a marked ruler, which is distinct from the straightedge considered here, and only requires the meta-step of using the compass to mark off intervals on the straightedge.

Approximate solutions to these problems are also fairly easy to come by. Ramanujan, Martin Gardner, and Benjamin Bold have all given methods of squaring the circle accurate to about 0.0001% based on the approximation

A bit of abstract algebra is all that is needed to make the above arguments about constructible numbers rigorous. The curious reader can find a more careful and accurate treatment of this material in any reasonable algebra textbook.[6] A field is, roughly speaking, a collection of numbers that can be added and multiplied (while staying in the collection) and for which all

not equal to zero, the multiplicative inverse

and the additive inverse

are also in the collection. For example, the set of numbers of the form

are rational, is a field (denoted

is too, so this field is closed under the operation of taking square roots.

The most important algebraic definition required here is that of the degree of an algebraic number. A number is said to be algebraic if it satisfies some polynomial with integer coefficients. The degree of

is defined to be the smallest

such that there is a polynomial of degree

, with integer coefficients, which has

as a root. Thus

For the numbers important to the constructability questions above, we have:

The intuition above is that a constructible number is an algebraic number built by repeatedly taking square roots. But any number of this form has a degree which is a power of 2. Since the numbers above do not have such degrees, we conclude that they are not constructible!

Once this foundation in Galois theory was in place, problems about straightedge and compass became fairly routine: in general, it's not terribly difficult to determine whether a given construction can be done or not, using tools of algebra. For example, there's a simple criterion to test whether the angle

can be trisected, in terms of algebraic properties of