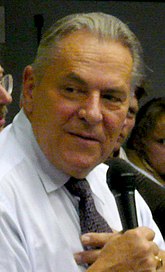 Stanislav Grof (1931-) is Czech psychiatrist. He promotes a therapeutic practice that consists of getting a patient high, (initially with LSD then with hyperventilation / holotropic breathwork when LSD became illegal), and attributing mystical significance to the experience.[1] The process, combined with the forking over of large sums of money, allegedly heals the patient from trauma. For a Grofian, the emphasis is on prenatal or birth trauma if there is no obvious reason for the patient's psychological problems. Which is clutching at straws, really. The hyperventilation is intended to produce an altered state of consciousness which activates the mind's natural "holotropic" healing process, holotropic meaning "moving towards wholeness". This is pretty much the thinking behind high-dose psychedelic therapy, as opposed to low-dose talk therapy. Other breathwork practitioners may assume it's all about past lives.

Holotropic breathwork was practiced in a medical setting until it became illegal in the UK; it is now practiced under the guise of self-help workshops.[2]

Grof talks about shamans a lot and humbly regards his own work as a paradigm shift in science akin to those of Newton and Galileo.

Ervin Laszlo is his BFF.

Carl Sagan is on record as having been interested in his work at one point.[3]