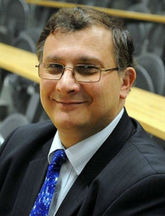 History will not treat you well.
If you were looking for Andrew Wakefield, but in GMOs, you found him

Gilles-Eric Séralini is a professor of molecular biology at the Institute of Fundamental and Applied Biology (IBFA) of the University of Caen in France. He is also President of the Scientific Board at CRIIGEN.[1] He was fairly well known in the biotech community for having a history of flawed studies,[2][3] but his controversial 2012 study on transgenic NK603 maize made him immensely popular among the anti-GM communities.

In 2006, Monsanto published a rat study showing that its YieldGuard® GM corn (MON863) was as safe and nutritious as non-GM corn.[4] Séralini disagreed, and performed his own analysis on the same data Monsanto published. He concluded that Monsanto were a bunch of dirty stinky evil corporate liars, and that the data suggested that MON863 corn caused liver and kidney damage in the rats. Greenpeace enthusiastically agreed.[5]

An expert panel examined Séralini's reanalysis, and decided that he was huffing a heap of hot air.[6] This didn't keep Fox News from reporting Séralini's analysis as a "bombshell" against the GMO industry, over six years later.[7]

In 2009, Séralini published another study which re-analyzed the toxicity data for the NK603, MON 810, and MON 863 strains, and — surprise surprise — came to the conclusion that they cause kidney and liver damage.[8] The European Food Safety Authority,[9] the French High Council of Biotechnologies, Scientific Committee[10] and Food Standards Australia New Zealand[11] all had about as many bad things to say about this study as they did about his 2007 study.

In 2011, Séralini did something similar with the results of 19 animal studies on GM corn and soybeans.[12] Since this study didn't receive the same degree of criticism as his 2007 and 2009 studies (probably because in light of the quality of Séralini's previous output, no one was willing to waste their time), we can all safely conclude that it's 100% well-performed science and must be immediately embraced.Do You Believe That? 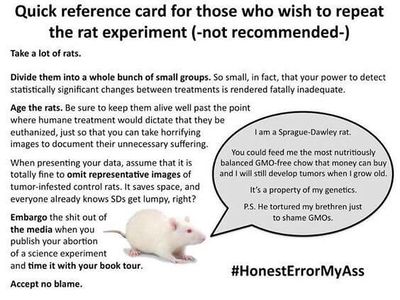 The infamous, and retracted, Seralini study was retracted for a reason. It was later republished without peer review, and Seralini recently won a case in France because a journalist there said he was an intentional liar. Something the first amendment in the United States gives me the right to do.

What became known as the Séralini Affair began in September 2012, and involved the publication of an experiment conducted by a group led by Séralini involving the feeding of of Monsanto’s Round-Up-resistant NK603 maize (corn) and the herbicide Round-Up to rats, over the rats’ two-year lifespan.[13] Soon after publication, numerous news sites posted articles using the study as "proof" that genetically modified foods were dangerous or caused cancer.[note 1] Many scientists sent letters to the editor[15] demanding retraction of the study for having extremely poor study design,[16][17][18][19][20][21][22][23][24][25][26][27][28][29][30][31] but the journal who published it didn't ask Seralini to withdraw the paper until late in 2013.[32] Orac of Respectful Insolence[33] was among many bloggers and news sites that posted articles that criticized Séralini's study. Séralini refused to provide data on the amount of food he fed to the rats and their growth rates (refusing to disclose data from a scientific study is a red flag that there's a serious problem with the study),[34] a standard practice that allows independent scientists to verify that the data supports the conclusions drawn by the study. The French academies of Agriculture, Medicine, Pharmacy, Science, Technology, and Veterinary Science all condemned the study as a "scientific non-event."[35] The EFSA,[36] the French Agency for Food, Environmental and Occupational Health & Safety (ANSES),[37] Health Canada,[38] Food Standards Australia New Zealand,[39] Germany's Bundesinstitut für Risikobewertung,[40] Belgium's VIB,[41] Mexico's CIBIOGEM,[42] and several other notable government agencies and research institutes have also condemned the study.

of the study. Sprague-Dawley rats, which were used by Seralini, have a lifespan of only two years and have a high risk of cancer over their lifespan[note 2]. The Séralini experiment lasted for the entire lifetime of these rats. The longer an experiment continues, the more rats get cancer naturally, that makes it harder to separate statistical "noise" from the hypothetical signal. For the study to achieve such separation (statistical power), each control and test group would have to include sufficiently many subjects. Organisation for Economic Co-operation and Development

(OECD) guidelines recommend 20 rats for chemical-toxicity studies, and 50 rats for carcinogenicity studies. In addition, if the survival of the rats is less than 50% at 104 weeks (which is the case for Sprague-Dawley rats[note 3] the recommended number of rats is 65.[43] The Séralini study had only ten per group.

Séralini responded to a handful of criticisms,[44] but he did not release his raw data and refused to answer many major questions.[45] The EFSA reviewed his response and concluded that "it provided only a limited amount of relevant information which failed to address the majority of the outstanding questions raised in the Authority’s first statement."[46] Many conspiracy and anti-GM websites accused all scientists who criticized Séralini's study of being paid by Monsanto; however, none of these accusers have produced any evidence of bribing, and the one letter to the editor from Monsanto scientists contains proper disclosure of their conflict of interest.[47]

In November of 2013, the journal that published Séralini's study retracted it, Séralini released the study's data to the journal who found the number of animals studied to be insufficient to form a firm conclusion.[48][49] The next day, Séralini threatened to sue the journal.[50] A Huffington Post article said it was "anti-science behavior" to retract the article.[51] The study was republished in June 2014 in Environmental Sciences Europe, an open access journal whose standards are, shall we say, somewhat more lenient.[52]

Other long-term studies, which were publicly funded, have uncovered no such health issues as imagined by Seralini. The Japanese Department of Environmental Health and Toxicology released a 52-week feeding study of GM soybeans in 2007, finding “no apparent adverse effect in rats.”[53] In 2012, a team of scientists at the University of Nottingham School of Biosciences released a review of 12 long-term studies (up to two years) and 12 multi-generational studies (up to 5 generations) of GM foods in the same journal that published the Seralini paper, concluding there is no evidence of health hazards.”[54]

CRIIGEN, the institute behind Séralini's study, has some worrying issues. Their current president is a homeopath/acupuncturist,[55] and several articles have found financial connections to the French supermarkets Auchan and Carrefour.[56] Carrefour launched an advertising campaign for their GM-free product range a mere five days after Séralini's study was published. CRIIGEN's funding is funneled through CERES, a shell foundation whose funding sources are shrouded in secrecy. The Foundation for Human Progress is another organization that funds Seralini's research — and this foundation has direct ties to anti-GM activist groups.[57] CRIIGEN was also caught manipulating the embargo system in order to have articles on their study published without having an expert review the results.[58]

Séralini published a book titled Tous cobayes! (which translates to "We're all guinea pigs!") right around when he released his 2012 study.[59] He is a consultant for Sevene Pharma[60] (a homeopathic pharma company),[61] and there is also evidence that he is linked to Invitation to Life, a New Age faith healing cult.[62][63]

Séralini has sued at least one person for libel. In November 2010, he sued Marc Fellous (professor of genetics at the University of Paris) for defamation. In January 2011, Mark Fellous was held liable for defamation, but the judges would only rule on his claim that Séralini's relationship with Greenpeace was a conflict of interest, saying that the other comments were part of scientific debate.

Hasty exit from the Cato debate[edit]

Séralini and Jeffrey Smith were scheduled to debate with Jon Entine and Anastasia Bodnar at the Cato Institute (yes, they're the reasonable ones here) on June 4th, 2013. When Anastasia had to cancel and Kevin Folta took her place, Jeffrey Smith withdrew from the event. Séralini stated that he would not debate either Entine or Folta, and abruptly left the debate.[64]

Other studies related to GM food[edit]