Despite its popularity, this graph is not an accurate representation of the effect.

The Dunning-Kruger effect (also known as Mount Stupid[1] or Smug Snake[2]), named after David Dunning and Justin Kruger for their seminal paper of 1999.[3] The effect occurs where people fail to adequately assess their level of competence — or specifically, their incompetence — at a task and thus consider themselves much more competent than everyone else. This lack of awareness is attributed to their lower level of competence, which robs them of the ability to critically analyse their performance, leading to a significant overestimation of themselves. In simple words: "people who are too ignorant to know how ignorant they are". When people do not recognize their own mental illness, this is known as "anosognosia"; this is common for people with bipolar disorder or schizophrenia.[4]

The inverse also applies: the unusually competent people tend to underestimate their ability compared to others; this is known as impostor syndrome.

The principle is illustrated indirectly by the common saying that "I've learned enough about ________ to know what I don't know." The implication is that someone who hasn't learned much about the subject would have no appreciation for how much there is to learn about it, and so might grossly overestimate their level of understanding.

The Dunning-Kruger effect is a slightly more specific case of the bias known as illusory superiority, where people tend to overestimate their good points in comparison to others around them, while concurrently underestimating their negative points. The effect has been shown by experiment in several ways, but in this case Dunning and Kruger tested students on a series of criteria such as humour, grammar, and logic, and compared the actual test results with each student's own estimation of their performance.

Those who scored well on these tests were shown, consistently, to underestimate their performance. This can be explained as a form of psychological projection: those who found the tasks easy (and thus scored highly) mistakenly thought that they would also be easy for others. This is similar to the aforementioned "impostor syndrome" — found notably in graduate students and high-achieving women — whereby high achievers fail to recognize their talents as they think that others must be equally good.

Those who scored lowest on the test were found to have "grossly overestimated" their scores, thus displaying what became known as the Dunning-Kruger effect. And what about the underachievers who overestimated their performance? In the words of Dunning and Kruger:[3]

This overestimation occurs, in part, because people who are unskilled in these domains suffer a dual burden: Not only do these people reach erroneous conclusions and make unfortunate choices, but their incompetence robs them of the metacognitive ability to realize it.

The original study was focused specifically on competence, as opposed to intelligence — Dunning and Kruger were more concerned with the empirical, measurable factors of how well a person could perform a task (even "simple" or "stupid" tasks) and that person's perception of how they performed that task, rather than the more nebulous concept of comparative "intelligence" or "education." However, the inspiration for the entire study was a desperately under-educated Pittsburgher who possessed badly flawed reasoning skills (see below). The term is still properly meant to describe a disconnect between perceived and empirical competence, rather than IQ or intelligence.

A little knowledge can be dangerous[edit] 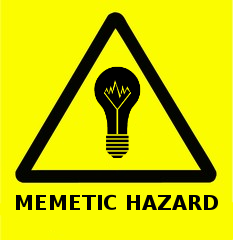 A little knowledge of the Dunning-Kruger effect could give you impostor syndrome![citation NOT needed]

For a potent example, consider former children's TV presenter and "science advocate" Johnny Ball, who in 2009 stunned audiences by denying the existence of climate change. His reasoning was based on the fact that water vapour as a greenhouse gas is much more prevalent, potent, and thus much more powerful than carbon dioxide — and because combustion reactions also produce water, it should be water vapour we're worried about, not carbon dioxide.[8] Sound reasoning to an amateur, but anyone minimally qualified in atmospheric chemistry would tell you that the water isn't a problem because the atmosphere has a way of getting water to the ground — precipitation, that is, rain, snow, or hail. Thus its concentration (for given temperatures and pressures) remains more or less constant globally.

Ball's premise is also used by some critics against the hydrogen economy: because hydrogen vehicles emit water vapour from their exhaust, they are seen to be more damaging to the environment than petrol driven vehicles. An ill-informed and unsound argument — hydrogen fuel cell vehicles emit approximately the same amount of water per mile as vehicles using gasoline-powered internal combustion engines.[9] The difference is that while water vapour remains in the atmosphere only a few days or weeks, and hydrogen gas about two years, carbon dioxide lingers for more than a century.[10] 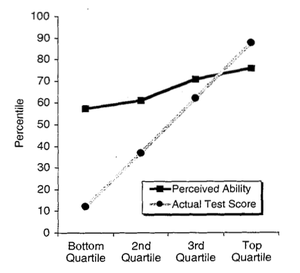 Comparison of actual score vs perceived score. A well-calibrated and honest set of predictions would follow a straight line (i.e., prediction of ability matches the outcome). However, experimentally it was found that people consistently over-estimated their ability. Graphed as a proportion of the over-estimate, those in the lowest quartile were guilty of the most significant over-estimation.[3]

Dunning and Kruger properly proved its existence with the 2000 Ig Nobel Prize winning[11] paper "Unskilled and Unaware of It",[3] doubtless at great risk to personal sanity.

They were famously inspired by McArthur Wheeler, a Pittsburgh man who attempted to rob a bank while his face was covered in lemon juice.[12] Wheeler had learned that lemon juice could be used as "invisible ink" (that is, the old childhood experiment of making the juice appear when heated); he therefore got the idea that unheated lemon juice would render his facial features unrecognizable or "invisible".[13]

After he was effortlessly caught (as he made no other attempts to conceal himself during the robberies), he was presented with video surveillance footage of him robbing the banks in question, fully recognizable. At this, he expressed apparently sincere surprise and lack of understanding as to why his plan did not work — he was not competent enough to see the logical gaps in his thinking and plan.[14]

The idea that people who don't know that they don't know ("Dunning-Kruger effect" is so much less confusing than any "know-know" phrase) isn't particularly new. The Bertrand Russell quote is from the mid 1930s, and even earlier, Charles Darwin, in The Descent of Man in 1871, stated "ignorance more frequently begets confidence than does knowledge." Even back in ancient Greece, Plato's Apology attributed to Socrates the quote at the top, which today is often summed up as, roughly, "the wisest people know that they know nothing."

In his 1996 book Rush Limbaugh is a Big Fat Idiot, Al Franken described the phenomenon of "pseudo-certainty", which at the time of writing and ownards, was rampantly being displayed by pundits and politicians such as Rush Limbaugh and Newt Gingrich, who would use "common sense" as the basis for their cocky assertions. Franken prefers the term "being a fucking moron."

Those who think they know never learn. —from the Tao Te Ching