From RationalWiki
Jump to navigation Jump to search
Not to be confused with sadism. 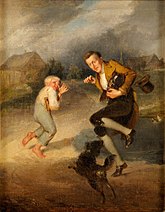 Schadenfreude is the act or emotion of taking pleasure in the misfortunes of others, normally those who you feel "deserve it" and/or those you envy. The word is from German, literally meaning "harm-joy." As all nouns are, it is capitalised in German, but not in English.[note 1] While in its simplest form, it is a feeling of relief or gratitude at not having misfortune befall oneself, and while it does not represent an active desire for harm to befall others, it can be malicious. Schadenfreude is usually considered mean-spirited, notably by those whom the joke is on the misfortune befalls. Sadism is a form of Schadenfreude.[2]

Well, everyone. No, seriously; everyone to greater or lesser extent. Yes, you too.

The entire basis of slapstick comedy

[3] is schadenfreude; be it getting hit on the head with anvils, poked in the eyes, or entirely unable to succeed at one's attempts (see for example Goofy

animated shorts[4]). Beyond slapstick, the "higher" forms of comedy also make use of schadenfreude. Accidents, misunderstandings, and troubles that befall a character can be funny (more so when brought on by themselves).[note 2]

Despite it being ever-popular and ever-present, issues of morality or concern are raised depending on the subject matter. As humans, we are expected to be able to show empathy or sympathy towards others, and so it is considered callous, cruel, or even psychopathic if we fail to do so. The same applies to schadenfreude; the more grievous the misfortune, the less acceptable it becomes to laugh at it.[note 3] A staple of black comedy,

[5] is the art of finding a tactful way to joke about such taboo topics. (Of course, this can also lead to what is known as Dead Baby comedy which pokes fun at social acceptability itself using a refuge in audacity.)

and so forth as being somehow "less than human" and therefore not worthy of the same consideration as right-thinking humans like us. This is usually done by convincing oneself or others that "they" are pure evil, and intent on nothing more than the destruction and enslavement (in that order) of everything "we" love.

Thanks to this, and to the false dichotomy that forms around the "Us or Them" mindset, some groups find schadenfreude in any form of misfortune - from tripping to terrorist attacks - that befalls their perceived enemies. This often makes them appear callous, cruel, or even psychopathic - which may or may not be justified.

The nature of fundamentalism is such that the perceived enemies of fundamentalists are legion (prolific), and therefore so too are the misfortunes that befall such "enemies". Frequently, this sort of misplaced schadenfreude will contain Biblical overtones, usually of the hell and brimstone variety, explaining how whatever recent tragedy has befallen said enemies is the result of their "sinful ways". Often, this will be followed by an encouragement to send money convert.

Almost every fundamentalist does this at some level, but among the most grievous offenders was the late Fred Phelps. Perhaps no one offers a better example of schadenfreude gone wrong; holding signs with slogans akin to "Thank God for Dead Soldiers", this man and his church have brought down the outfits as diverse as bikers and Fox News.

Similar to what occurs with religious fundamentalists, those holding extreme political views will often look at their opponents as somehow deserving of retribution. Within one's own country, politicians are usually less likely to be open about this sort of schadenfreude, as it makes them look like a dick and alienates voters. If the target is another country, or regime, however, it becomes more acceptable.