I'd suggest a category like [[Category:Reality according to creationists]] or something like that for articles like this one. Just to point out that this isn't our serious position. --Sid 19:50, 15 September 2007 (EDT)

Why do we not have a page on Australia?[edit]

Sheesh! Really, who cares about some big flat island stuck off down the ends of the Earth near New Zealand? Next you'll be asking for an article on Argentina, Malaysia or Indoneisa. Jeez. DogP 17:37, 30 March 2008 (EDT)

Pi, Indonesia is part of Oceania. If you want to talk about culture differences, add that to the article. But that doesn't change the fact that both Indonesia and Australia are grouped together on a map- and that sentence is about geography. --"CURtalk 21:22, 7 February 2009 (EST)

Er...no, you're wrong. Most geographers (and I am one) do not include Indonesia in Oceania, although I will give you that how exactly Oceania is defined is not always clear. Check Wikipedia's version for example. DogP 21:25, 7 February 2009 (EST)

First, Indonesian have an Asian culture similar to Malaysia and Thailand other South-East Asian island nations in the region. The Native Australians and Torrens Straight Islanders have more in common the Fijian, Maori and other Islander nations we call Oceania. Second, I live in Australia I know what Oceania looks like. - User

We have always been at war with Oceania... ħuman

Okay, so I was watching Good News Week , and comedian DeAnne Smith made a list of harmless Aussie animals. Her list included a total of one item: some of the sheep - as stated in our Wildlife section. Is this a common joke about Australia, did she perhaps read it here, or are one of you the lovely Ms Smith in disguise? Just curious. 124.179.13.198 (talk) 03:30, 27 April 2010 (UTC)

We really need a section on this - there is such wide scope for jokes inherent in it. — Unsigned, by: Bogan hunter / talk / contribs

How dare you! As a loyal subject of HM QEII (in her capacity as Queen of Australia) I am disturbed by the outrageous stereotyping that you people seem content to indulge in. HAVE YOU NEVER HEARD OF DAME EDNA EVERAGE OR ROLF HARRIS??? Philistines. --Horace (talk) 08:43, 21 May 2012 (UTC)

I deleted the hoop snake line, hoop snakes have never been accepted by the scientific community. Going to replace it with the saltwater crocodile something that does exist.

The stonefish needs a mention, I reckon. One of the most venomous fish in the world has got to mean something. TheIslander 10:37, 3 October 2012 (UTC)

I tweaked the comment on genocide - it kind of implied that the ex-convicts were the main offenders. This is far from true, the first massacre involving ex-convicts wasn't until 1838 (and many of those involved were hanged as a result). The most heinous acts were conducted by either soldiers or police, under orders. Free settlers (aka landholders) were next. See http://en.wikipedia.org/wiki/List_of_massacres_of_Indigenous_Australians VOXHUMANA 09:34, 23 April 2013 (UTC)

I removed the outdated nonsense about Nick Xenophon that wasn't even true (most powerful man in Australia, WTF?) and I'm puttin g the picture here in case someone wants to use it somewhere else. 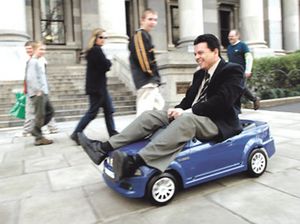 On a photograph '(the artist) is one of the people in this picture.' In another context 'persons of Australian and Torres Islands cultures' were informed that there were images of people no longer living from those cultures. persons Can someone explain the cultural significance behind these statements? (Wanting to be 'not accidentally disrespectful' should the situation arise). 82.44.143.26 (talk) 19:02, 23 March 2015 (UTC)

Should we replace the flag with its proper form? "Because this site does not have enough flag desecration" is a pretty terrible reason for it to be there. TheGreenWarrior (talk) 22:17, 28 August 2015 (UTC)

"BUILDING OUR NATION THROUGH PUBLIC EDUCATION":

Like the concept of public schools being free, however, the idea of secular public schools was more honoured in the breach than in the observance. Thus religious clergy were permitted and even encouraged to visit public schools on a regular basis to provide religious instruction; aspects of the official curriculum and some of the textbooks contained strong religious messages; and students were encouraged to live according to Christian moral values.

Such a state of affairs has continued to the present day. As a result, it is fair to say that public schools have been less secular in practice than they have been in rhetoric, even though in most States secular education is enshrined in law. Indeed, there is a growing concern among many public educators about the extent to which religion is permeating a number of aspects of public schools. I will give three examples:

They censored/denied and forced the UN to cover up the report on the Great Barrier Reef, the Coalition.

Most likely , they walked when they could, and crossed the ocean barriers that existed at the time (such as the Lombok Strait) in rafts or other watercraft when they couldn't. --FluffyGhostKitten (talk) 17:03, 13 August 2018 (UTC)