This page is automatically archived by Archiver
Archives for this talk page: <1>

I think the reason why most on the anti-ID say that ID is not testable is that if the designer is supernatural, it is by definition out of the realm of testablity. I suppose aliens might have put life in motion, but the the "who designed the designer?" question comes up. I guess if you could trace the lineage of designers back to a first, mortal, non-supernatural designer, then you could have an argument.

Also, it's not clear to me that irreducible complexity presupposes ID. After all, one can argue that the flagellum is irreducibly complex, but can show inductively that natural selection favored it (although never with 100% certainty, of course). And on the other hand, IDers never seem to provide mechanisms by which the designer designed... Sterilevote! 18:34, 12 November 2008 (EST)

Failure to justify its own reason to be[edit]

Irreducible Complexity appears to be actually focused on proving constant intervention rather than the divinity of the Intelligent Design. By doing so they actually prove that the design is flawed ( Mr. IROlsztyn). IROlsztyn

We assume that advantageous mutations are rare, meaning the gene density will drop with the distance from x=0, this can be plotted as a probability curve, every non-linear graph (a graph that's not a straight line), can be described by a power of a constant, the simplest form being f(x) = x2. In statistics, a continuous probability curve the, f(x), is related to x through an exponential function.

Dude, you have just EC'd quite a large edit of mine. It doesn't affect your stuff, the change is quite similar actually but expanded.

Never mind, I checked your edit to the statistics section and included that in what I did. Feel free to review, of course.

I have no clue on the statistics so I'll trust your judgment on that part. Until then we can possibly focus on the abstract examples like the one with a mousetrap or a paperclip.

==Statistical examination of chance== Often irreducible complexity relies on overstating the aspects of chance in evolution. Usually by outright stating that "this couldn't all have happened by chance" and attempting to argue from an almost straw man version of evolutionary theory. However, the role of chance still needs to be looked at and looking at it thoroughly often shows that the odds aren't stacked up that badly. Elementary statistics prove that dismissing chance as a whole is mathematically erroneous.

Imagine a situation where every base pair (DNA building blocks that make up genes and chromosomes) has an equal chance of mutating within a certain period of time. We can now plot these base pairs along the x-axis, the distance of the base pair to the x=0 is inversely proportional to its necessity (that is, base pairs that would harm the organism if they were to mutated will be closer to x=0 than base pairs that could mutate without harming the adverse effects.) 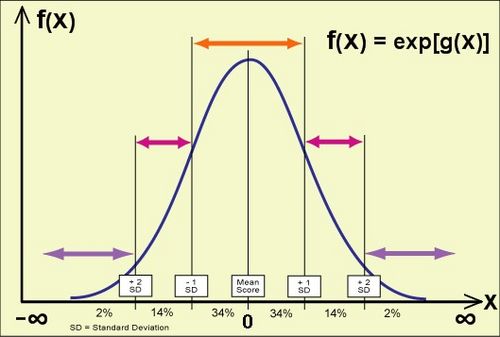 We assume that advantageous mutations are rare, meaning the gene density will drop with the distance from x=0, this can be plotted as a probability curve, every non-linear graph (a graph that's not a straight line), can be described by a power of a constant, the simplest form being f(x) = x2. In statistics, a continuous probability curve the, f(x), is related to x through an exponential function. Now, since exp[z] = e2, where e is Euler's Number<ref>http://en.wikipedia.org/wiki/E_(mathematical_constant)</ref> with a value of 2.71, it can easily be shown that the probability will never become zero (c0 = 1.)

In addition, one of the most important factors in evolution - the fundamental role of Natural selection, cannot be neglected. As a result of natural selection evolution is nothing like the blind random process that its critics sometimes claim it to be.

There is an entry on the Evolution News and Views blog which probably should be addressed here: Is There a Michelangelo Building Sandstone Arches? I read about this on the Sensuous Curmudgeon here: Natural Arches Aren't Designed, But You Are I will be extremely busy over several days. TomS TDotO (talk) 03:51, 12 August 2014 (UTC)

It's not interesting....it's nonsense. It's hundreds of words basically saying they don't know what evolved or not, people who say entirely one or the other is wrong, but it doesn't mean evolution is right. That and evolutionary science is not "proved" and is merely conjecture by a biologist that came up with an idea that's "good enough"...even though that's complete horseshit every time a creationist has tried to gibber that as an answer. -EmeraldCityWanderer (talk) 14:24, 9 September 2015 (UTC)

If you are doing a critique, it's like an entire idea based on the balance fallacy. -EmeraldCityWanderer (talk) 14:36, 9 September 2015 (UTC)

Looking at the first example of hemoglobin the paper states that it takes 2 alpha and 2 beta subunits, which is a sign to creationists that it's a sign of irreducible complexity. Direct quote from the article: "Creationists will focus on this and claim that irreducible complexity is still a valid objection to naturalistic evolution. Their logic is faulty because the initial claim was that the very existence of irreducible complexity means that it could not possibly have evolved."
While they say that scientists (paraphrase) only need a reasonable explanation to justify their ideas.
Direct quote: "All that's required is that evolutionary biologists propose a reasonable explanation making it possible for such structures to evolve naturally in a world where gods play no role in evolution. That has been done. The idea that irreducibly complex structures are impossible to evolve has been falsified."
Plus "It's important to note that this explanation for the evolution of hemoglobin has not been "proved" even though it seems extremely likely." (uncertainty tactic)
Which ignores testing, correlative evidence, and transitional information. It doesn't mean that random mutations don't occur that turn out to have a positive benefit with other mutations, but it seems like they are tiptoeing around trying to guide the reader into looking at increases in "information" (complexity) in the gnome (they call it gene accretion) without selective processes by...something else? Quoting the referenced article at the bottom as well, "whereby proteins were progressively added to the machinery for faster, more stable, and more efficient performance of whatever the task of the machinery was in the first place" and that it is an increasing process "Constructive neutral evolution is a ratchet-like (unidirectional) process that can increase complexity regardless of whether it is necessary or not" but to what or why is left to the imagination. It might be that these posts are incomplete, but it seems like a series of leading questions to something like a guided evolution that thinks creationism is BS...but evolution is just conjecture by biologists. -EmeraldCityWanderer (talk) 15:59, 9 September 2015 (UTC)

Well, it looks like we were reading the same article after all, just ascribing different motives to it. The author does refute creationists' irreducible complexity, but cheerfully admits that science has not yet nailed down all the answers. That should not come as news to anyone who hasn't sipped the creation science kool-aid. MaillardFillmore (talk) 19:19, 11 September 2015 (UTC)

Yeah, that nails it on what I saw in their opinion on creationism. It's just that when people start taking a good deal of time to point out that science was wrong before, put a lot of emphasis on the ideal of science is to be fluid to new information, and time about the uncertainty that we don't know how it was done exactly (things that are well known to researchers that doesn't need to be rehashed repeatedly)...it starts to read more like a dog whistle that's kind of common in cranks. -EmeraldCityWanderer (talk) 19:41, 11 September 2015 (UTC)

I read that there is no animal without wheel because wheel is an example of irreducible complexity. https://www.livescience.com/22146-why-don-t-any-animals-have-wheels.html

The page says that unlike eye, wheel is irreducible. Eye without fluid, lens, etc is functional, while wheel without the "round wheel", "axle", "mechanism to transport nutrient to wheel" is not at all. — Unsigned, by: Akangka / talk / contribs

Interesting, but while the argument is logical I'm not sure I agree with its premises. A wheel certainly doesn't have to be perfectly round. And it doesn't need an axle or nutrients: it would be possible to develop a non-driven wheel (like a castor on an office chair) made of some kind of bone, horn, etc, used in conjunction with legs for locomotion, which could later evolve into a powered means of transport without legs. The problem with irreducible complexity is that it's very hard to say what is genuinely irreducible. --Annanoon (talk) 11:32, 20 June 2019 (UTC)