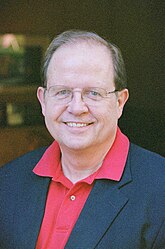 Dr. Robert E. Theodore Baehr is the prime mover behind the website Movieguide, chairman of the Christian Film & Television Commission[1], and a column writer for Worldview Times[2]. Movieguide is "dedicated to redeeming the values of the mass media according to biblical principles, by influencing entertainment industry executives and helping families make wise media choices", said choices being the promotion of as many fundamentalist films, books, and other media as he can. How is this mass media promoted? Why through his public relations company, Kairos Marketing[3], of course! Naturally, he denies any conflict of interest between the two.

He personally claims that Movieguide increased the percentage of family movies per year from 6% in 1985 to 41% in 2001[4]; more discerning viewers would probably attribute that increase to the increased availability of cheap filmmaking by technological advances. But who knows? God works in mysterious ways!

When he's not obsessively rating and reviewing movies on how fundamentalist they are, Dr. Baehr bloviates about various issues involving law and government, usually in articles at WorldNetDaily. Examples include:

In order to gauge just how family-friendly/religious/ridiculous a movie is, Dr. Baehr has come up with a unique rating system.[8] For instance, the popular film The Hobbit: The Desolation of Smaug has a rating of -2 (BBB, CC, CapCap, Pa, FR, VV, S, N, M), while the Rick Santorum production The Christmas Candle is +4 (CCC, BBB, V). This babble can be explained by resort to the mind-bogglingly complex rating system Movies are first rated within an Acceptability Rating of +4 thru -4. The meaning of the Acceptability Rating is as follows:

The rating is then provided with a whole list of modifiers that apply to the movie. Thus, The Hobbit: The Desolation of Smaug is an "EXTREME CAUTION" movie, which contains a very strong biblical or moral worldview, strong Christian worldview or elements, is twice-over capitalistic, has mild or light pagan worldview or elements, a light non-Christian worldview, moderate violence, implied adultery/promiscuity/sexual perversion/sexual immorality, naturalistic nudity, and light miscellaneous immorality.

Those who confuse the movie ratings for a type of religious HankyCode[9] are to be forgiven, as it is understandable given the proclivities of certain fundamentalists (like Ted Haggard).