The Babylon Bee is a satire site that tries and fails to be the American Christian conservative equivalent to The Onion. The site is even designed similarly, but has neither the wit nor subtlety. This is largely because they're reliant on simply reiterating conservative talking points and strawmanning their opposition rather than delivering actual punchlines making fun of their opposition, or worthwhile commentary on society. Plenty of their humor is also reliant on punching down people for laughs or trying to make fun of their own beliefs, but the jokes usually fall flat. The Babylon Bee often targets far-right religious figures such as Joel Osteen[1][note 1][2][3] and Pat Robertson,[4] but that doesn't make them any more witty.

Perhaps at one point in history, they were less mean-spirited and had milder headlines,[5] and they even raised alarm at Donald Trump's popularity among evangelicals years ago,[6] but a lot of their recent content is so bad, The Babylon Bee can qualify in an updated Cracked's "5 Awful (But Revealing) Examples Of Conservative Comedy". That being said, they're still capable of fooling conservatives every now and then, including at least one fake-news hating schmuck,[7] and so their content tends to show up in R/AteTheOnion.

Despite The Babylon Bee apparently protesting about the loss of conservative voices and playing persecution,[note 2] viewing and posting comments requires a premium subscription.[8] The Onion, however, does not even have comments sections, to be fair.

In order to make an effective satire, you need to actually understand what you're trying to parody. This means pulling effort to do research so you can implement the grain of truth that makes good satire effective. Unfortunately, adopting conservative ideology and carefully getting facts correct before making a satirical point often conflicts, so The Babylon Bee more often just opts in standard right-wing commentary or all-too-common right-wing portrayals of their opponents by having them be oversensitive, censor-happy, and easily outraged crybabies, and then adds a layer of absurdity to pass off as satire.

Even when their content is more harmless or depicts more self-depreciating humor, their commentary is often super shallow, predictable, and childish. There's an element of surprise that's essential for satire as well, which The Babylon Bee rarely achieves. If everyone has heard the joke before, either don't do it or find a way to subvert this. Also, don't try to make the joke super obvious (though you can do exaggeration for humorous effect). Simply put, don't insult your audience's intelligence.

Strawmanning their opponents and persecution complex[edit]

See the main article on this topic: Straw man

"Dems 'If America Isn't Racist, How Do You Explain These White Hoods We're Wearing?'"[9]
"Congress Passes Law To Recognize Juneteenth, The Day Republicans Freed All The Democrats' Slaves"[10]
"House Democrats Draft Legislation That Would Make It A Hate Crime To Eat At Chick-Fil-A"[11]
"Liberal Activist Explains Notion Of Tolerance To Man She Just Called A ‘Worthless [Expletive]’"[12]
"Sesame Street Introduces 'Todd', A White Male Muppet Who Is Blamed For Everything"[13]

A recurring theme among The Babylon Bee is a persecution complex: their opponents are frequently sensitive, easily-set-off, and hypocritical folk who successfully alter "cancel" or "ban" those who display even the vaguest of gestures. This was apparent even years ago when The Babylon Bee was supposedly better.[6] There is an idiotic and painfully persistent Republican talking point: "so much for the tolerant left". Additionally, the article contents do not add anything to the headlines, so The Babylon Bee fails to reward people for actually investigating their articles. The Babylon Bee also suggests "the Democrats are the REAL racists", which we must say: if you want to write satire, you must get your history correct. Do your goddamn research. And be original. One of the examples is from 2016, so the The Babylon Bee has been doing this for quite a while now.

Transphobia (or how many times can you repeat a joke)[edit] 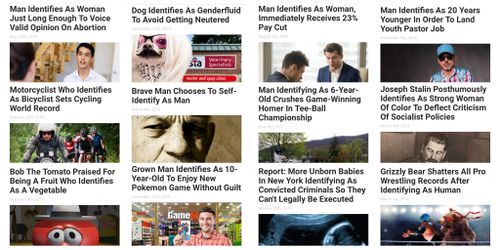 Just about sums it up.

The Babylon Bee seems to understand neither gender identity nor creating new material on this subject. The Babylon Bee instead uses the same tired joke[14] that the other conservatives use to mock trans people, which is exaggerating the amount and flexibility of gender identities. Additionally, who is being targeted is a demographic that has laws denying them basic rights, encouraging invasive behavior on teenagers (which The Onion has successfully capitalized on),[15] and even legalizing their existences out.

These headlines are the usual conservative attempts to strawman their opponents. In the headlines and in the content, they often try to portray their opponents as offended by a intentionally absurd situation, which doesn't work because conservative comedians already do this all the damn time, and it's never funny especially not 7,895 times.[note 4] The Dungeons and Dragons article, for example, describes a situation where "screeching leftists on Twitter" forced the Dungeon & Dragons producers' hands and that rules were amended to not "offend" non-binary folk and that misgendering kills your character.

To further reinforce its status as an out-of-touch desolate comedic wasteland, The Babylon Bee has made jokes about millennials that everyone already has heard of thousands of times already. Avocado toast? Tide pods? Snorting condoms? Basement dwelling? Participation trophies? Fidget spinners? It's all there. The second-to-last example is their own attempt at trying to play on boomers, though it boils down to "boomer blames millennial for something millennial didn't do", hardly clever. They have some occasional articles, such as in the last examples, where they take a more sympathetic stance on millennials and criticize older church-goers for repelling millennials. The article in particular (with, albeit, little subtlety) depicts an out-of-touch baby boomer, who bought a house when it was cheaper in the '60s, telling millennials to "scrape together $800,000 or so and get themselves a nice little bungalow", and another article also depicts out-of-touch baby boomers making similar useless suggestions for saving a million dollars for a fixer-upper. Articles like these, however, are dwarfed by the avocado toast, basement, and participation trophy jokes.

The content actually somewhat engages in absurd self-parody by depicting a stoic man as absurd as a crying one. But the delivery is extremely shallow and has the subtlety of a sledgehammer for no reason. There's just not much to say for the article beyond "haha hypocrites". The headline, regardless, is not the best choice to satirize such things, as the target audience has an inclination to the real concept of toxic masculinity that harms men.

While their content on homosexuality is nowhere near as common and capable of inflicting as much pain as their approach to gender, they still engage in some homophobia. The example article, from 2017, is among the worst offenders. This article just reiterates, sarcastically, word-for-word, a conservative talking point that veils bigotry behind a nice sounding phrase of just "disagreeing with a gay or trans lifestyle" and then, as usual for The Babylon Bee, creates a scenario of outraged groups censoring them and appearing unreasonable. In reality, LGBT+ people can absolutely see through the bigotry behind "disagreeing" with a "lifestyle" and their angry responses are justified.

"'We Must Stop Eating Beef To Fight Climate Change,' Says Scientist Who Looks Suspiciously Like Chick-Fil-A Cow In A Lab Coat"[30]

This one is one of the less harmful examples, but they really had to explain to readers their joke of how obvious the conflict of interest is and inform readers that the joke is that the cow references Chick-Fil-A's use of cows for advertising. Oh, and it's littered in puns, which is a sign of peak satire. And ending the article in typical tasteless Babylon Bee fashion, a scientist gets sent to a gulag for reiterating this joke one more time and also disagreeing with "SCIENCE", all-caps theirs. As for gulag jokes, just substitute "gulag" with "Auschwitz" and that'll be just as hilarious.

The joke lacks any sort of clever… anything. There are possible remarks on soda drinking being a problem in America, but the joke is so poorly delivered, it's hard to tell. And the other part of the joke is that both entities have "Dr." in the beginning of their names? A 7-year old can come up with better material.

This one falls a bit under the first blueprint of The Babylon Bee trying to depict opponents as oppressive, but this one is worth mentioning for its especially abysmal execution: their underlying argument is that the requirement of proof of vaccination is akin to the yellow star of David Jewish people wore during Nazi Germany. Unfortunately for The Babylon Bee, this is a harmful position conservative anti-vaxxers have advanced (not to mention, have been doing this for years),[33] something the anti-vaxxers have faced actual widespread condemnation for.[34] As if they wanted to add garnish to the thing, they also snuck in cheap "Biden is senile" jabs and made Kamala Harris cackle evilly. A better satire would make these people act and sound more believeable to their real selves.