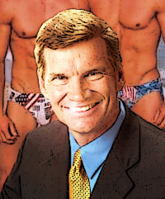 Don we now our gay apparel.
Not to be confused with a homosexual preacher, or indeed any other person who is gay. 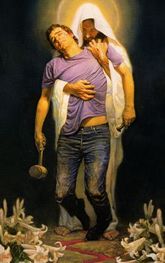 , one of the images decorating Haggard's World Prayer Center.

Ted Haggard (1956 –) is the totally not-gay[2] (remember that; it's important to know) former head of the New Life Church in Colorado Springs, Colorado. In 2007, Haggard was exposed as a methamphetamine user and a regular customer of Denver's male prostitutes. We must assume that money the faithful gave him was never used in this way. After a month of intensive "therapy", he was pronounced[3] 100% heterosexual" and announced that he was going for a master's degree at the University of Phoenix.

The reason Ted Haggard chose the homosexual lifestyle is that Satan has a presence in the Church, which is why people can still have impure thoughts in church. Even though Satan can find his way into the Church, rest assured, there is no way that Satan found his way into the Bible long ago and twisted the whole book, because the Bible says so: Every word of God is pure: He is a shield unto them that put their trust in Him.[4] This shield does not cover his gay interests, however.

Haggard was a member of the Southern Baptist Convention[5] until he decided to switch-hit for the Methodists.[6]

The next section is the only thing that matters in this article, so don't bother reading the rest.

See the main article on this topic: Not gay

Seriously, he's not. He is maybe 30% gay, but he's like 200% heterosexual AND he has the pure shield of God combined with the magic powers of reparative therapy and his wife. It cannot be stressed too highly – no, he's not gay.

Seriously guys, he isn't gay. It has to be said again: Ted Haggard is not gay.

I mean, like, there's just NO WAY he could be gay.

And anyone even suggesting that he's gay should be punished severely.

Even in text so ridiculously tiny that you'd have to zoom to read it.

Seriously. He's not gay. At all.

Ted Haggard founded the New Life Church in 1984. Locals often refer to it as "6 Flags Over Jesus" due to its enormous size and bizarrely-large number of flags out front. Attendance has been limp (!) since Ted's fall from grace.

Rev. Haggard has apparently left the "restoration" process after three weeks. He has been advised to seek secular work and is studying to be a counselor.[8] We must pity his secular victims.

In 2007, Haggard begged the gullible public for money to finance himself and his wife while studying online and moved with her into rehabilitation. He asked donations to be sent to a tax-exempt organisation that was dissolved several months previously. His resources include the following:

After losing his credibility and the possibility of continuation for his ministerial career, Haggard has had to build a new life for himself in the secular world. The path he seems to have chosen, according to his personal website, is the shady world of life insurance sales.[9] His business model bears a scary resemblance to another certain business practice with a distinct triangular shape and other such get-rich-quick scams out there on the Internet, proving once and for all that life in the church really does give you an education in parting the gullible from their cash and that life in the church fails to make people heterosexual.

Haggard and his wife (a woman) appeared on the reality TV series Celebrity Wife Swap in 2012.[10]

Regarding that wife, Haggard admitted that if he were 21 in today's society, he would identify as bisexual.[11] He noted in the same interview that he's perfectly satisfied having sex with his wife.

Scandals aside, there is good evidence that Mr. Haggard was an extremely bad man. When meeting with a ten-year-old with aspirations of becoming a Christian preacher, Haggard mocked the child's speaking skills, informing the child that he could trade on his youth and enthusiasm until he gained some "real material."[12]

By sheer coincidence, Ted Haggard is also the slightly-opinionated preacher who briefly appeared and was interviewed by Richard Dawkins in the documentary The Root of All Evil?,[13] which was filmed in early 2006 before the scandal.