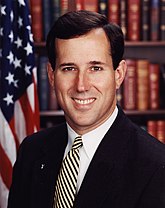 Not to be confused with fun

He is infamous for his wide repertoire of fail, with painfully out-of-touch levels of stupidity, self-righteousness, sanctimoniousness, hypocrisy, spitefulness, fundamentalism and smugness that he exudes both in terms of statements and positions on issues ranging from the U.S. invasion of Iraq, intelligent design, homosexuality, and the Terri Schiavo media circus.

America as a Christian nation[edit]

During his 2012 Presidential campaign announcement, Santorum proclaimed that America was founded on the Bible and Judeo-Christian values. He repeated the old Religious Right lies that all the Founders were Christians and had planned to establish this country as a Christian nation.

On 8 December 2011, Santorum engaged in a non sequitur in arguing that poor and unemployed Americans don't need food stamps because there is an epidemic of obesity in the country.[4] Unless he was arguing that thin Americans should eat the fat ones.

See the main article on this topic: Santorum Amendment

In 2001, Santorum tried unsuccessfully to insert language which came to be known as the "Santorum Amendment" into the No Child Left Behind bill that sought to promote the teaching of intelligent design while questioning the academic standing of evolution in public schools.

Rick Santorum is against any form of contraception stating, "One of the things I will talk about, that no president has talked about before, is I think the dangers of contraception in this country.... Many of the Christian faith have said, well, that's okay, contraception is okay. It's not okay. It's a license to do things in a sexual realm that is counter to how things are supposed to be."[5]

Santorum is no friend of gays, and he has been called a bigot. He has compared having the right to consensual homosexuality to having the right to have sex with a dog, adultery, bigamy, incest, polygamy, and doing “anything,” presumably anything outrageously bad.[6][7]

Rick is concerned about the effects of gay marriage on children.[8] In a 2003 interview with the Associated Press responding to a question about how to prevent sexual abuse of children by priests, Santorum said the priests were engaged in "a basic homosexual relationship," and went on to say that he had "no problem with homosexuality. I have a problem with homosexual acts."[note 2] Santorum explained his views, particularly that the right to privacy (as detailed in Griswold v. Connecticut) "doesn't exist in my opinion in the United States Constitution." Santorum went further by explaining that, "whether it's polygamy, whether it's adultery, whether it's sodomy, all of those things are antithetical to a healthy, stable, traditional family." Finally, he claimed that sodomy laws properly exist to prevent acts that "undermine the basic tenets of our society and the family." When the Associated Press reporter asked whether homosexuals should not then engage in homosexual acts, Santorum replied:

He's under the impression that gay marriage will somehow cause straight couples to have fewer kids, primarily by "saying that marriage isn't about children." This, no doubt, must be a real surprise to married couples who are childless by choice and unmarried couples who have actually had children.[11]

His opponents successfully fought back by working to “attach his name to a sex act that would make his big white teeth fall out of his big, empty head,”[12] see Santorum.

In 2002, Santorum made an article about the Roman Catholic Church sex abuse scandal. Santorum wrote:

In June 2006, Santorum declared that weapons of mass destruction had been found in Iraq. Officials of the Department of Defense, CIA intelligence analysts, and the White House have all explicitly stated that these expired casings are not part of the WMD threat that Operation Iraqi Freedom was launched to contain. The specific weapons Santorum referred to were chemical munitions dating back to the Iran-Iraq War that were buried in the early 1990s.

"There is no such thing as global warming."[15]

When a representative of his campaign was confronted by a Dutch reporter, she responded "It's a matter of what's in his heart. He's a strong pro-life person."

When in Puerto Rico, Santorum had this to say:

There is no such law. The United States has no official language.

This is false; only one doesn't. Why? Because it's a medical school.[18] Even then, medical post-secondary offers History of American Medicine courses. We could assume that anybody accepted was required to take regular American History courses prior to acceptance.

Ricky has a rather far-fetched opinion of Obama and abortion:

Santorum campaigned on the promise of annulling all same-sex marriages and reinstating the “don’t ask, don’t tell” policy.[20] He also compared same-sex marriage to polygamy, which was a poor comparison to make to gain conservative support, considering polygamy is perfectly acceptable in the bible. Mr. Santorum achieved national notoriety by claiming homosexual marriage would lead to bestiality and child rape.[21]

Then, we got this:

And the crowd claps.

It's often quote mined to just "I don't want to make black people's lives better," but it's not much kinder in context. Many welfare recipients are of other ethnic groups (a good percentage of them white), and Rick-baby seems to follow age-old stereotypes about black people, which are, ironically, ensuring that they won't have the opportunity to "earn the money."

Rick denied saying exactly that, instead preferring the term African American. The general consensus is he did only say "bla- people," though whatever the hell that could stand for is up for debate.[23] Oddly enough, Herman Cain stuck up for him.[24]

At a campaign stop in Greenville, South Carolina:

Yes, not only did the compassionate, Christian Santorum comment on how murdering foreign scientists is a "wonderful thing" (feel that Christian Love!™) but would have happily started openly killing scientists from not just Iran but Russia if they displeased him, and this would have zero ramifications with regards to an effective act of war, coupled with seriously pissing off the most nuclear armed state on Earth.

As can be expected from a self righteous, sanctimonious and almost amusingly out-of-touch Christian fundamentalist, Foamy holds some interesting views with regards to Israel.[26]

In short, he claimed that Palestinians don't really exist and thus have no rights, and that the entire West Bank is part of Israel due to his notion of a "law of conquest" in which once a nation militarily occupies land they hold all rights over it and over the people contained within. It remains to be seen whether he would have supported this in case of a hypothetical occupation of US soil.

Rick Santorum is in favour of enhanced interrogation techniques like waterboarding, which are recognised as torture by the UN.[27] In a public disagreement, he accused John McCain of not understanding torture. McCain was tortured for 5 and a half years in Vietnam.[28]

In October 2013 he made the claim that the film industry was controlled by Satan, although this seems more like an attempt to pimp his cinematic disaster movie The Christmas Candle for EchoLight Studios (of which he's the CEO) than anything else.[29]

Santorum received wingnut welfare as a Senior Fellow of the Ethics and Public Policy Center, and directed their "Program to Promote and Protect America's Freedom" from to 2007 to 2011.[30][31]

No, we're not talking about Santorum's intracranial disposition here. In 2021, Santorum claimed that "there isn’t much Native American culture in American culture.",[32] essentially a variation on past imperialist claims of Terra nullius.

Apparently, the Santorum family does not celebrate Thanksgiving, eat corn, tomatoes, potatoes, or chilies.[33] Santorum was never a Boy Scout and never paddled a canoe.[33] The reality that the Iroquois Constitution

inspired the drafting of the United States Constitution did not penetrate the thick armor of the Santorum cranium.[34] CNN belatedly discovered the thickness of Santorum's cranium and kicked him in his patootie.[note 3][32]

On June 6, 2011, Santorum announced that he would be running for President of the United States in 2012. At that time just 2% of Republican voters favored him.[37]

Ever the optimist about his chances, in early December he said that the Iowa caucus was still "wide open" even though he was polling only "single-digit" support at the time. Newt Gingrich's lead was "surmountable," he said. To show just how lubed he was about his chances of further penetration into wide open Iowa and how frothy that single digit was, he further stated that "we're supposed to believe that the latest crave is the one that's going to stick" and "we're going to be peaking right about the right time."[38]

Sure enough, by the end of December, Santorum surged from behind in Iowa,[39] with Mitt Romney on top and Gingrich fading.[40] On December 30 he outdid himself by taking in an entire football along with some buffalo wings and the media in tow.[41]

In February 2012, votes in three states filled the ballot boxes with Santorum, causing a rise in the polls.[44]

On 10 April 2012, it was announced that Santorum had suspended his 2012 presidential campaign, failing to live up to his principles and carry his dead campaign to term.[45]

It was rather strange that he ran at all, considering he was a two-term Senator who lost his reelection bid by a landslide; presidential contenders are usually those who have been big winners elsewhere, and politics in general is not kind to those who have such a history of defeat. That he did as well as he did is more a testament to the desperation to nominate anyone but Mitt Romney than to his actual viability.

Other bizarre public discourse of note[edit]

He joined with Glenn Beck to fight the horrifying non-menace of the United Nations Convention on the Rights of the Disabled on the grounds of its non-threat to national sovereignty.[46] New World Order Wheelchair Suicide Brigade, attack!

He's now a columnist for WND, which is sure to delight opposition researchers for both primary and general election opponents if he ever decides to run for office again.[47]

Santorum has 7 living children, and lost one to premature birth. Their handling of this child's death later garnered some attention during his presidential run, which seemed unnecessary given how many other completely legitimate issues there were to tear him apart on. His last child was born in 2008 with Edward's syndrome,

and in defiance of all odds is still alive today. Given their medical expenses are far higher than they would be in any other civilized country, it makes it all the more amazing that he isn't among those seeking healthcare reform.[48]

Despite all the evidence to the contrary that you just read (and there was a lot of it), Santorum's actually reasonably well-educated, having earned a bachelors degree in political science, an MBA, and a juris doctorate, all from fairly respectable universities (ie not diploma mills or Liberty University).